How bad are the Yankees at developing young pitchers: Part One

Share All sharing options for: How bad are the Yankees at developing young pitchers: Part One

With the news that the Texas Rangers have been scouting Joba Chamberlain, the Yankee faithful have turned their lonely eyes to Arlington with dreams of trades saving, at minimum, a difficult start to an injury-riddled squad for the 2013 season. While it is highly debatable as to exactly what the Yankees could score with Joba as the center piece of a trade these days, I must admit that it is somewhat sad, as a Yankee fan, to be even debating the subject.

The reality of the current organization is that it has received a rap, bad or not, that it can't develop young pitching talent into major league success stories very well. The majority of that reputation comes from the now-infamous Joba Rules, and the young hurler's physical deterioration that followed, despite the organization's efforts. So where do we go from here, or to be more succinct: is the Yankees' reputation towards developing pitching a legitimate one?

Most of the articles I've read regarding this issue have been of the damning nature. Some note how few games have been started by Yankee homegrown talent relative to the rest of the league, while others point out how little total WAR those pitchers have produced relative to the field. There is also the line of thought that a lot of those totals accrued due to Yankee prospects getting traded to other organizations that were then able to develop them successfully. So in essence, proponents of that position are still undermining the success of former Yankee farmhands by implying that, even at the major league level, these players wouldn't have succeeded if they had remained a Yankee.

I can't think of an accurate way of testing that last position, because we simply don't have enough data points in any direction to draw such conclusions over the last 10-15 years. It's not like there are 50 Yankee farmhands pitching for other teams currently, and it's not like the Yankees have traded for 50 young pitchers to see if they could sink or swim in New York. You need something more than a handful of names to draw these kinds of conclusions, because as we're about to see, getting even the highest-rated pitching prospects in all of baseball to succeed is a truly rare thing.

To criticize the Yankees for not having had as many games started by homegrown talent relative to the rest of the league ignores the environment in which those decisions were being made. The reality check here is that the Yankees have been continually going for it since about 2002. By going for it, I mean they've had a core group that was aging, but provided the foundation to keep trying to win titles by supplementing them with talent via free agency and trade. In that environment, I don't expect a team to try and develop young pitching as they struggle to adjust to the highest level of competition. 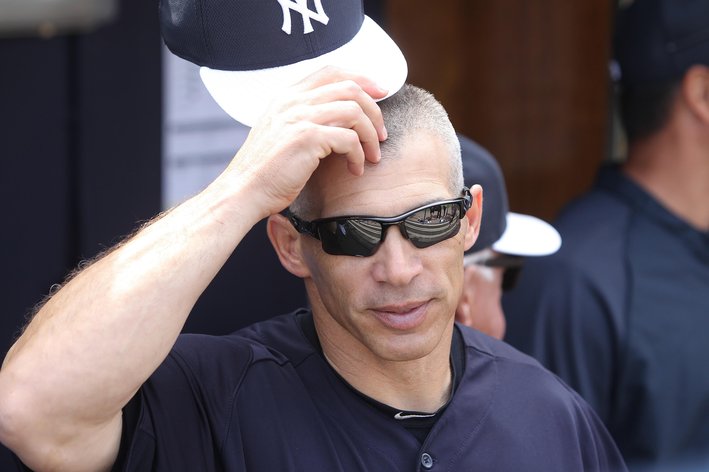 With two closely matched opponents finding great success this spring, which should be rewarded with the final spot in the Yankees' rotation?

What made this so unusual is the length of time that this team could keep going for it with their aging core. In 2002, Derek Jeter was a 28-year-old shortstop. The decline phase for the up-the-middle fielders (catcher, shortstop, center fielder) usually gets pretty steep and is earlier than the corner players. A smart team should start worrying at about 32. The fact that the core kept producing beyond a rational expectation was a blessing. However, it also altered the normal dynamics of the environment in a way that dissuaded against unknown quantities, like pitching prospects, and encouraged known quantities, like veterans. Since finances were not a limiting factor at that time, the Yankees acted in at least a manner we should anticipate even if one disagrees with the strategy.

The primary question, however, can still be addressed, because we do have at least some data points, but admittedly still not many. A number of people have done a lot of groundwork regarding the information we need the most: What are the percentages, or odds, of pitching prospects turning into major-league-caliber success stories? There is a good article written by Scott McKinney at Royals Review from a couple years ago that breaks down the success rate of pitching prospects depending on how high they were rated, and measures to what degree they were ultimately successful. He used the Baseball America Top 100 prospect list to separate players into quintiles, and then rated them as Bust, Success, or Superior depending upon that player's average WAR, excluding limited exposure seasons of less than 25 innings pitched. Here are the groupings as he provided them:

With that in mind, here are the success rates of pitching prospects from 1990 through 2003 separated into quintiles: 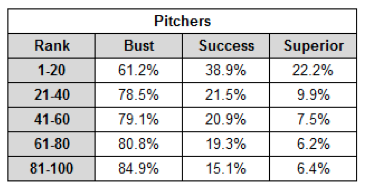 For reference, Andy Pettitte's average WAR is currently 4.2, solidly placing him in the Very Good portion of the Superior category. Pettitte peaked at #49 on Baseball America's top 100 prospect list in 1995. This means there was about a 7.5% chance that he was going to develop into the effective pitcher he has been, or there was roughly a little over a 1-in-13 chance that he would achieve that superior level of performance. Again, from the Yankees' perspective, they need to generate over 13 Andy Pettittes in order to get just one guy who can produce at that rate.

But wait, there's more! There's a much higher likelihood of at least generating someone who is considered a member of the Success category, like Phil Hughes. He's generated an average of 1.5 WAR over six qualifying seasons. Most of that is due to his two limited innings pitched counts in 2008 and 2011. Still, take a look at those quintiles above and the odds of success. Even though Hughes topped out at #4 on the BA Top 100, he was still only a 1-in-2.6 chance of becoming what he is today. Again, the odds of Hughes becoming a Superior player, and I think this is what most people really think of when criticizing the Yankees' pitching development, was only a 1-in-4.5 type of chance.

Going back to McKinney's article, you can see towards the end that the Yankees have actually fallen right in the middle of the organizational depth chart ranking for total prospect success rates. This, however, does not delineate between fielding and pitching prospects. Here is a compiled list of Yankee pitching prospects from 1995-2007 that reached the BA Top 100 list for comparison to the expected rates of success that McKinney has provided. I stopped at 2007 since I wanted to give at least five years for prospect development time. Chamberlain and Betances are on this list, as they were on that 2007 Top 100 list even though they peaked at later years with higher rankings. 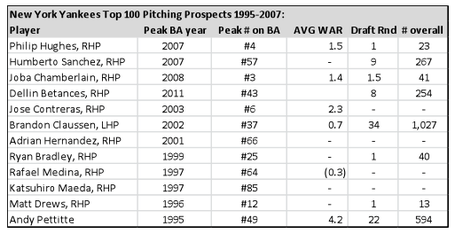 The first thing you might notice is how terribly small the list is. Just look at the number of names on this list and the fact that one third of them were signed as international free agents.This might suggest a more valid criticism against the Yankees track record for drafting players versus the actual development of them.

Given that this list is so small, it is impossible to draw any conclusions regarding the organization's ability to develop pitching prospects, because they simply haven't had very many legitimate prospects to speak of. Below is the calculation to see if the Yankees have generated a materially different value from what should have been expected.

I calculated the estimated average WAR column in the following method: Take the number of players in the quintile, multiply them by the appropriate percentage of success rate from McKinney's chart for that given quintile, and then multiply that by the midpoint of McKinney's average WAR for Success qualification. For example, the top quintile calculation looks like this: Expected Success Rate for Top Quintile is (4 * .389) = 1.5560, Midpoint of Expected Average WAR is (1.5 WAR + 2.499 WAR )/2 = 1.9950, therefore 1.5560 * 1.9950 = 3.1042 or rounded to 3.1. Note that doing the calculation for the Superior category gives us the exact same number of estimated WAR, as the percent of expected success declines in line with the anticipated greater return on WAR: (4*.222)=.8880, (2.5+4.5)/2 = 3.5, .8880 * 3.5 = 3.1. The actual average WAR column is just the cumulative number of each qualifying player.

The bottom line is that it doesn't look so bad. However, as noted before, Andy Pettitte was a pretty rare find when it comes to Superior career performances. So what does this chart look like if he is removed?

Basically right in line with what the odds say we should expect from this lot of prospects. It's too small of a sample to say anything conclusively one way or another, but by that same coin I don't think it is correct to criticize the organization as being poor at developing its pitching prospects based off what we should logically expect. This does, however, lead us to the next question of whether or not the Yankees have been poor at getting those pitching prospects in the first place.

Further investigation might also include how the Yankees have fared at developing non-prospect success stories relative to the league, or if there's been a difference in their success at developing relief pitchers versus starters. There's a large amount of potential queries in this regard, and I'll try to answer some of these questions next week in part two of this investigation.