Yankees 5, Blue Jays 17: Give Up. Season's Over. Everything Sucks. Etc.

Let us never speak of this game again.

Share All sharing options for: Yankees 5, Blue Jays 17: Give Up. Season's Over. Everything Sucks. Etc.

It's only Spring Training. Don't give up. The season is not over with yet. It hasn't even started. Everything does not suck. Not even in this dumpster fiery debacle of a game. It was just not fun to listen to, especially due to the Blue Jays radio announcers. The Yankees lost to the Blue Jays 17-5. That should be all you need to know, but I suppose I'll try to get the word count above 300 and explain just what went wrong.

So what went wrong? What didn't go wrong is the proper question to ask in this game. So what didn't go wrong? Kevin Youkilis had a pretty good day today. He was only a double and single away from the cycle, as he belted a triple and his second dinger of the spring. Good for him. The offense, as a whole, wasn't all that bad today either. Progress! The Yankees had nine hits and scored five runs due to the offensive efforts of Eduardo Nunez, Jayson Nix, Corban Dallas Joseph, Jose Pirela, Travis Hafner, and the previously mentioned Greek God of Walks. On any other day this level of offensive production would probably be acceptable and lead to a Yankees win. But it is not this day. 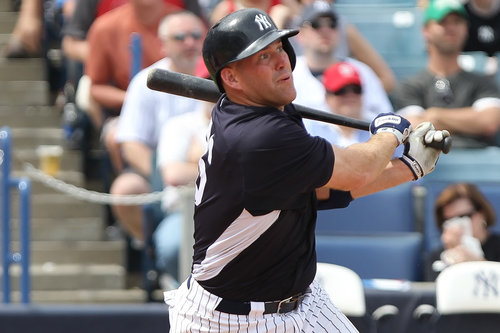 Kevin Youkilis altered his swing in the offseason to try and bring back the Youk that torched AL pitching from 2008-10. Andrew analyzes how Youk's swing has evolved.

This day, we failed. If you've read the last two days of Game Recaps, you might have noticed our esteemed pinstriped scribes praising our pitching's preferable promising performance. Today our pitcher's pitching performance was pitifully putrid. I'm done with the P's. Jose Ramirez started this game. His previous Spring Training performances were downright spectacular. Today was not. Not by a long shot. Ramirez did not make it out of the first inning. He gave up four walks, two hits, and six earned runs. Adam Warren came on in what some would describe as relief. There was nothing relieving about Warren today, except when he was taken out the next inning after giving up four hits, five walks, and eight earned runs.

Brandon Pinder would then "relieve" him, but not before giving up a couple more runs and a few more hits, followed by a home run the next inning. Preston "fake Lance Pendleton name" Claiborne would pitch the next two innings. He only gave up one run. Those seventeen runs would be all the Blue Jays would need to defeat the Yankees today. On another positive note, Josh Spence and awesomely named Graham Stoneburner would pitch three scoreless, walk-less, and almost hit-less innings to finish up this game.

So yeah. 17-5. It happens. It's Spring Training. Time to be moving along. Let us never speak of this game again.

Tomorrow the Yankees will be back in Tampa to take on the Marlins.