Yankee Dollars Not Buying as Much as They Used To

With increased spending throughout the game, the Yankees' stranglehold on the market may be coming to an end.

Share All sharing options for: Yankee Dollars Not Buying as Much as They Used To

During the offseason, the Yankees showed spending restraint. During Spring Training, depth has proven to be a major problem after injuries to Curtis Granderson, Mark Teixeira, and perhaps Phil Hughes as well. The Yankees payroll this year is going to exceed $215M, so it really isn’t fair to blame the Yankees ownership's spending plan. The real connection is quite clear: Regardless of where the money goes, a dollar does not go as far as it used to.

How do the Yankees Handle Pre-Arbitration Salaries? 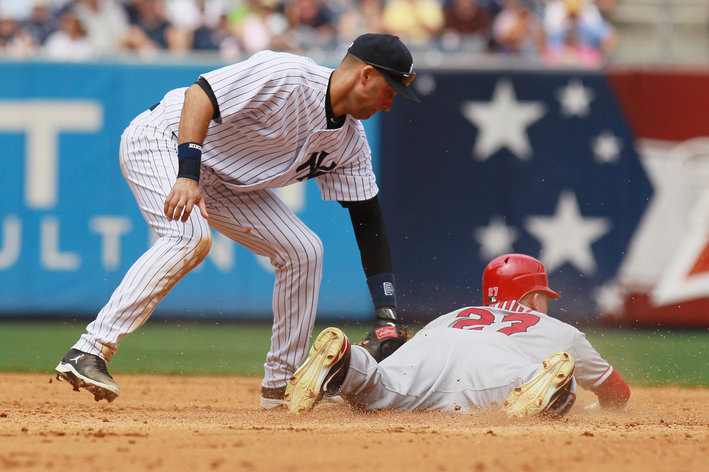 Mike Trout's salary raise from the Angels didn't match his production, but do the Yankees handle their players any differently?

In the late '90s, the Yankees had a high payroll full of homegrown stars on cheaper salaries and they won year after year. In the 2000s, the Yankees had to change gears, so they retained their stars at high prices, and bought or traded for other high-priced stars. The payroll grew and the Yankees continued to win. The late '90s model will always be effective, but it is extremely hard to replicate. Other franchises may be satisfied with up and down cycles necessary to develop new stars, but the Yankees are not. The 2000s model may not be broken, but the Yankees cannot expect to have too many more miles left going this route.

This chart shows the percentage of MLB salaries that were devoted to Yankees. Numbers from USA Today and Cot’s.

To put this in context, if the Yankees were to have 8% of all MLB salaries like they averaged from 2003-2011 for this coming year, they would need to spend $254M. The extra $40M could more than cover the depth issues the team is currently suffering through. Almost half of all teams will have payrolls exceeding $100 million dollars this year. If the Yankees want to continue to compete like they have the past ten years, and continue the strategy they have employed the past ten years, it’s going to cost a lot more money than the Yankees are currently spending.

No matter how well the next batch of prospects play, they are not going to be as good as Jeter, Bernie Williams, Rivera, Pettitte, and Posada. We can say "let the kids play", but it is not enough. The Yankees need to spend smarter. They cannot outspend other teams in the draft or in the foreign markets because of spending caps. Adding money to the scouting and analytics budget would presumably help. It would make a lot of sense to start outbidding other teams when it comes to posting fees, as they are uncapped. Admitting that the Yankees were extremely fortunate in the late '90s and had spent their way to the top in the 2000s may be difficult, but relying on either of those two philosophies going forward will not prove as successful over the next fifteen years.