Ivan Nova is still very much alive in the competition for the Yankees fifth starter position. Great pitching and a productive 8th inning allow the Yankees to defeat the Rays 3-1.

Share All sharing options for: Yankees 3, Rays 1: Pitching Continues To Impress This Spring

Ivan Nova started this game for the Yankees and he did not disappoint. He has not disappointed all spring. Today he pitched four innings without giving up a run or a walk, while striking out two batters and allowing four hits. Nova escaped a couple jams today, something he did not do that well in 2012. If he can get his mechanics back to 2011 form, the competition for fifth starter might very well go in Nova's favor. Even if he doesn't, it probably will anyway. Time and more Spring Training will tell.

Brett Marshall, who was either cut yesterday and just decided he was going to pitch anyway or is still on this team, came in to relieve Nova in the fifth inning. He would pitch 3.2 innings and give up two hits, one earned run, and one walk while striking out three. Marshall has little chance to make the team, considering he has not pitched an ounce of Triple-A ball yet. It's still nice to see any of our rookie pitchers doing well. Rookies doing well is one of the best parts of Spring Training. Josh Spence and Matt Tracy would come in to finish the rest of the game. 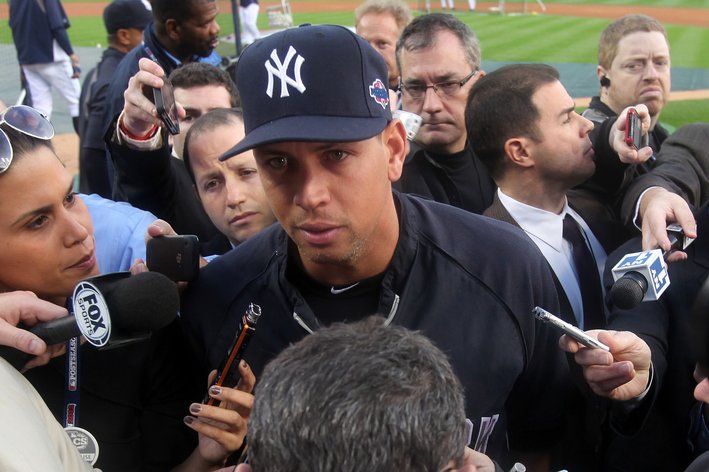 They spout personal reasons for breaking the story and cast doubt on its legitimacy.

The majority of the offense came in the eighth inning. Francisco Cervelli would lead off with a single. Thomas Neal, who should not be overlooked for the roster (and not just cause of my NEAL BEFORE ZOD thing), notched his second hit of the day to get pinch runner Walter Ibarra to third base. Due to a misplay by Rays shortstop Hak-Ju Lee. the Yankees scored their first run off the bat of Slade Heathcott. Both Neal & Slade then scored on a single from back-backup catcher and averagely named Bobby Wilson. This would be all the runs the Yankees would need to win this game.

The defensive had some bright spots and some ugly spots as well. Three errors on the day. Yikes. I wonder if the Yankees lead the league in errors this Spring Training. Eduardo Nunez continues his throwing woes (throwoes?) at the shortstop position. Ronnier Mustelier, now in competition for third base and the outfield, committed a fielding error at third base while Zoilo Almonte erred in right field. Meanwhile, at the catchers position, Cervelli continues to flash the arm strength and accuracy behind the plate. Two runners tried to steal second against Cervelli today. Both runners were thrown out. Cervelli has shown much better catching defense than Defensive Warlock Chris Stewart. When you consider the fact that Stewvelli will probably provide the same level of offense, Cervelli should probably get the starting catcher's job. Pitch framing will probably come into play though. Probably. Sadly. Sigh.

The Yankees have a night Spring Training game at home in Steinbrenner Field against the Phillies tomorrow.