Mariano Rivera the Greatest? Gossage Answers Like a Silly Goose

Mariano Rivera's job is easy. That's what former Yankees' reliever Rich Gossage seems to think. And, he never misses an opportunity to say it. Instead of being a supportive alumnus, whenever Rivera's place in history is discussed, the Goose acts more like a wolf in sheep's clothing.

On the same day Rivera announced his intention to retire, Gossage couldn't resist the temptation to squawk. You see, according to the Goose, although Rivera's accomplishments are impressive, they don't really stack up to the performances put forth by the relievers of his generation. Sure, Gossage has always been willing to concede that Rivera is the greatest closer, but when it comes to ranking all relievers, the hard throwing righty maintains that he and his contemporaries deserve extra credit because they pitched longer outings.

Usage Distribution for Gossage and Rivera 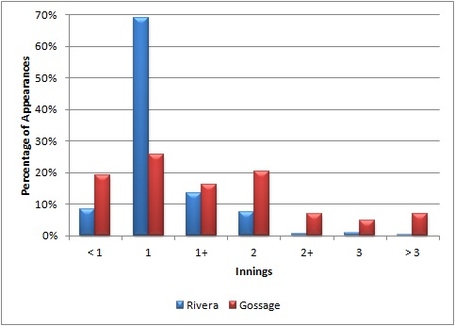 There's no denying that relievers pitched longer stints in Gossage's era. What isn't clear, however, is why the Goose considers that to be a badge honor. What really counts is the accumulation of performances, not the relative length of individual appearances. And, when you compare the two side by side, the statistics say a mouthful, which is a good thing for the humble Rivera, who has never been as boastful as the outspoken Gossage.

Tale of the Tape: Gossage vs. Rivera 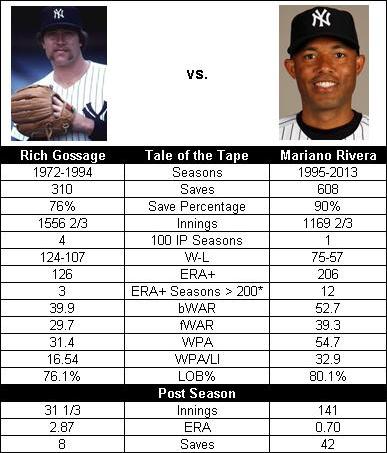 We'll never know whether Rivera could have handled Gossage's workload, or if the Goose would have been even more dominant in a one-inning role. So, when Gossage throws down the gauntlet to the modern closer, it's nothing more than an empty challenge. The same is true of Gossage's braggadocio. As much as the Goose demands an apples-to-apples comparison, he only wants it on his terms, with all assumptions made in his favor. By making such outlandish claims, Gossage doesn't come across as a proud performer touting his resume. He just sounds bitter.

I don't know if they'd ever have gotten a hit off of me." - Rich Gossage, when asked how dominant he would have been pitching only one inning, New York Post, March 10, 2013

I would throw out the challenge of, do what we did and we'll compare apples to apples. I'm not taking anything away from Mo . . . We know we could have finished the ninth, Sutter, Rollie Fingers, myself." Rich Gossage, again discussing the difference between relievers and now and during his era, Newsday, March 9, 2013

What Gossage doesn't like to consider is the possibility that shorter appearances in higher leverage situations might be either as difficult as the role he performed or even more so. In fact, a careful examination of game logs suggests this might be the case. In appearances of one inning or less, Gossage, Bruce Sutter and Rollie Fingers all struggled mightily, whereas Rivera maintained consistent performance regardless of appearance length. Granted, Rivera's longer appearance sample is small and he rarely pitched beyond two innings. Also, the Gossage trio might have performed better in shorter stints had they been conditioned to pitch that way. However, the data shows that being asked to record only three outs isn't inherently easy, and that's the claim that makes the Goose sound so silly. 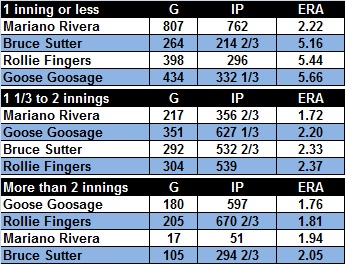 Gossage can pound his chest all he wants. There's nothing wrong with being proud of a Hall of Fame career. However, a little humility goes a long way too. After all, if the Goose deserves consideration as the greatest reliever of all time, he doesn't need to prove it to others. Rivera has always been comfortable letting his performance on the field speak for itself. Gossage should learn to do the same.

Mariano Rivera to retire after 2013 season