Have you ever had the capacity to hit a little bit and play first base while not embarrassing yourself? Then maybe the Yankees are talking to you, too.

Share All sharing options for: Yankees talking to Derrek Lee and oh God it's come to this

So the New York Yankees currently have no clear candidate to fill Mark Teixeira's void at first base in wake of his wrist injury that will keep him out until at least mid-May. That "at least" is very tentative, too, as it could possibly be even longer. Remember, Jose Bautista had a similar wrist injury last year and only played two games in the second half. Doctors reported that Tex's injury was not as severe, but the possibility still remains that it could be awhile before we see Tex making his faces on the field again.

Fret not, Yankee fans! David Waldstein of the New York Times reported this scary proposition in an article last night:

"[The Yankees] have asked the retired first baseman Derrek Lee whether he would come out of retirement, according to a person with knowledge of the talks who asked to remain anonymous. As of Sunday night there was no deal pending, the person said, but Lee was interested and the situation could always be revisited."

Oh my. This is the same Lee who couldn't find a job last offseason and decided to retire rather than sign a minor-league deal anywhere. Eep. Don't get me wrong, Lee was once a fine first baseman and a terrific ballplayer. Yankee fans probably most remember him for being the first baseman on the surprising 2003 Florida Marlins team that beat the Yanks in the World Series and embarrassingly seemed to legitimize con artist Jeffrey Loria as an owner to some people. Lee hit .292/.378/.521 with 339 doubles, 270 homers, and a 130 OPS+ during the 2000s, topping out at a career year in '05 with the Chicago Cubs in which he won a batting title, slugged 46 homers, and finished third in the National League MVP voting. He was a good defensive first baseman, too.

We are not in the 2000s anymore though. Well, I guess we kind of are since "2000s" kind of encompasses every year for the next millennium, so if people are saying the Edgardo Alfonzo energy crystal is a possible option at second base for the 2875 Enceladus Eskimos, then by all means. But I digress--Lee has not been at that level in quite some time. At first glance, his .263/.337/.436 triple slash with a 107 OPS+ from 2010-11 might not look too bad, but these numbers received a big bump from a pair of hot Septembers. In the first half of 2010, Lee hit .233/.329/.366, and in the first half of 2011, Lee hit .235/.294/.372. While September is far from a bad month to get hot, having a traditionally slow starter does not bode well for a team looking for first-half help. Keep in mind that these numbers are from a couple seasons ago too; who knows if a now-37-year-old Lee can bring it back to even that level.

Right now, the first base position is a dark cloud starring Dan Johnson. While "the Great Pumpkin" is known for his late-season heroics with the Tampa Bay Rays, there's a reason he only came up big once or twice a year--he was busy sucking for the rest of it. He could never seize a first base or DH job there, and he actually only hit a paltry .168/.282/.336 in his three years with the Rays. While the lefty swing might play well at Yankee Stadium, it's plain to see why the Yankees are considering alternatives as far-fetched as Lee. 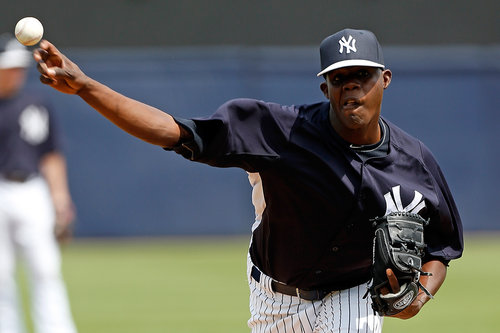 The Yankees have announced a slew of roster cuts after today's game. A total of eleven players (seven pitchers and four position player) were cut from big league camp.

What else is there? In an interview, Brian Cashman said they don't really consider Juan Rivera an option at first even though he's spent some time there in the past two seasons. Considering the minimal defense Rivera provides, it's hard to blame them. What about moving Kevin Youkilis across the diamond and then scrambling to find a third baseman? Jayson Nix is not a starter. Ronnier Mustelier and Corban Joseph are nice thoughts at third, but as promising as their offense might be, it will be hard to compensate for their "eh" defense at third. Maybe they'll look better with more time at the position this Spring; Joe Girardi did say that Mustelier would be given a shot at third, too, where he played full-time in Cuba. Youk can play the occasional game at first base, but it's probably best to leave him at a position where he's needed more. Think of it this way--if the situation were reversed and the the Yankees suddenly had to search for a third baseman and they had Youk already planned at first, one would probably want him to be tried at third since third baseman are indeed scarce. I'm hoping Mustelier can make the team in any possible thought, so if it's as the third baseman, hey why not?

Maybe Derrek Lee can dial back the clock and fill in for a little while. His defense would probably be fine, and if he can hit even around league-average, it would be gravy. However, I certainly would not predict much of anything from him. It just seems like too much of a longshot. But hey, these are dark times we're living in. You never know.