Yankees Offense Takes Step Back, but How Far?

Share All sharing options for: Yankees Offense Takes Step Back, but How Far?

Just about everyone expects this year’s Yankees offense to score fewer runs than last season, but could the 2013 Bronx Bombers take a nose dive all the way back to 1991? ESPN’s Dan Szymborski seems to think so…at least on Opening Day. According to his projections, when the season starts, Yankee fans could get an unwelcome glimpse at what it was like to root for the team’s offense during what was arguably the franchise’s nadir.

Szymborski’s "ZiPS" forecast calls for the Yankees’ Opening Day lineup to score 4.29 runs per game over the course of a full season, a drastic decline from not only last year, but the past two decades. What's worse, when placed in context of the deflated run environment of recent years, the projected output shrinks further by comparison. At 96.4% of last year’s American League average per game run production, an offense that scores only 4.29 runs would rank as the 15th worst in franchise history. 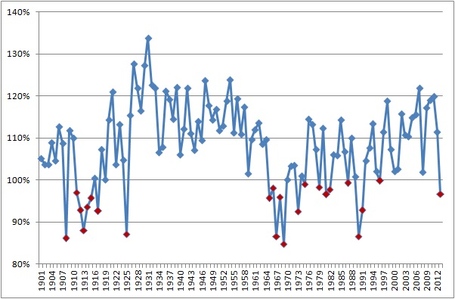 Note: Graphs represents the percentage by which the team over-performed or underperformed the average (100% on the x-axis). 2013 is based on ZiPS projections versus 2012 runs/game.Source: Baseball-reference.com

Before Yankee fans despair too much, Szymborski’s prediction is based upon not having Derek Jeter and Curtis Granderson in the lineup for the entire the season. Then again, although clearly a worst case iteration, the exercise does illustrate the team’s lack of depth and declining margin of error. Still, it’s not worth getting too bogged down in doomsday scenarios before the season even begins. So, instead of focusing on what could go wrong in the future, let’s look back at the disasters of the past for perspective.

What was the worst Yankees’ lineup of all time? In terms of runs per game, the 1908 Highlanders’ average of 2.97 is uncontested. Relatively speaking, the 1969 offense ranks as the worst. That season, the team’s lineup managed to score only 84.8% as often as the rest of the AL. By comparison, even the low bar for this year’s offense would tower over the paltry production turned in during those seasons.

Now that we know which Yankee teams had the worst offense in historical terms, we can approach the question from a hypothetical standpoint. In other words, what is the worst Yankees lineup that can be constructed from the hundreds of players who have had qualified seasons in pinstripes over the last 112 years? Click here, then read it and weep.