Who Comes After Derek Jeter?

Share All sharing options for: Who Comes After Derek Jeter?

"After me the deluge." - attributed to Louis XV

Derek Jeter's days in pinstripes are numbered. Ask anyone. Like an annual rite, this observation has become a part of Yankees' Spring Training. Over the past four years, the articles written about the Captain's inevitable decline have all followed the same formula, as if torn from a book of Mad Libs. Simply enter (1) Jeter's age, (2) an accomplishment never achieved by a shortstop at least as old, (3) a few poetic metaphors related to time (a clock, hourglass, setting sun, etc.) along with (4) speculation about his next contract, and voilà, you have the first baseball column of spring.

Before anyone gets the impression that I am pointing fingers at others, no one has harped on Jeter's baseball mortality more than I have (see here, here, and here). And, who can blame us? Because Jeter has been so good...and all good things must come to an end...it's very easy to understand why so many people are intrigued by his longevity and fixated on when it will come to an end. However, a much more fascinating question than when Jeter will retire is who will replace him once he's gone? 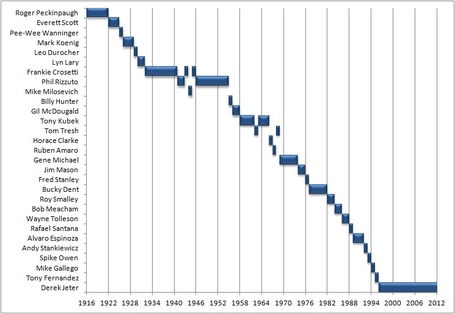 Note: Starting shortstop based on player who had most PAs at the position in a given year.
Source: baseball-reference.com

Before Jeter took over as the Yankees' starting shortstop on Opening Day in 1996, the position was a revolving door since the days of Bucky Dent, which just so happened to coincide with what at that point had been the Bronx Bombers' most recent championship era. Just about every Yankee fan has great appreciation for Derek Jeter, but those who grew up watching the likes of Bobby Meacham, Wayne Tolleson, Rafael Santana, and Alvaro Espinoza probably cling to the Captain even more closely. After all, they know that when Jeter retires, the Yankees' next shortstop is much more likely to resemble the retreads who came before the future Hall of Famer than the legend he'll be replacing.

Although Yankee fans are best advised to savor every moment that Jeter plays shortstop, Brian Cashman can't afford that luxury. Not only do the Yankees lack even the semblance of an heir apparent in their farm system, they don't even have a player capable of being a viable backup right now. With the exception of Eduardo Nunez, for whom this lack of depth has meant inexplicable job security, the Yankees' failure to cultivate another remotely useful shortstop makes Jeter's longevity even more important to the team's continued success.

Teams with a Potential Logjam at Shortstop

Note: Prospect ranking by Keith Law. FA Year refers to the offseason when each player will next be eligible for free agency.
Source: ESPN.com and baseball-reference.com

If there's a silver lining in the uncertainty regarding the next Yankees' shortstop, it's the overall strength at the position in the minor leagues. ESPN's Keith Law recently ranked 13 shortstops among his top-100 prospects, including three in the top-10. How does that help the Yankees? Almost every team with a blue chip at the position also has an incumbent with the potential to be a viable starting player for an extended period of time. Nowhere is that more evident than in Texas, where Jurickson Profar is already nipping at the heels of Elvis Andrus, who just so happens to be eligible for free agency when Jeter's contract expires in 2014. Other shortstops on teams with emerging prospects at their position include Stephen Drew, Asdrubal Cabrera, and Hanley Ramirez, so if the Captain can continue his smooth sailing for another two seasons, the inevitable transition might not be as difficult as first envisioned.

Who will be starting at shortstop for the Yankees in 2015? Despite the alternatives discussed above, based on his track record, the odds-on favorite is probably still Derek Jeter. At 41, Jeter would become only the third regular starting shortstop that age or older (joining Honus Wagner and Luke Appling), but for most of the second half of his career, the Captain has been testing and conquering uncharted waters. Besides, it just doesn't pay to bet against Jeter, unless, of course, you write about baseball for a living.