When did the position players peak? A long, long time ago.

Share All sharing options for: The 2013 New York Yankees Lineup: Optimized for 2007

Two-thirds of the Yankees' projected 2013 lineup is over the hill. This should not come as news to anyone reading this; it's a simple fact of baseball's aging curve. Ichiro Suzuki is 39. Derek Jeter will turn 39 in June and Travis Hafner will turn 36. Kevin Youkilis will be 35 by Opening Day. Mark Teixeira will turn 33 in April and has seen his production decline each of the last four seasons. Maybe you can quibble over Curtis Granderson, but he'll turn 32 before St. Patrick's Day and took a big step back from his career year in 2011. Heck, even Robinson Cano has kissed his twenties goodbye, and by the end of August Brett Gardner will have done the same.

Collectively, the best days of the 2013 Yankees are behind them. It makes one wonder when the best days of this lineup actually were. I don't mean as individuals, that's too easy, but as a group. As individuals, each of the top seven men in the projected Yankee batting order (all but Gardner and the replacement-level catcher) have had seasons in which they have finished in the top five in the MVP voting. If you could have the Yankees' 2013 lineup in any other year in history, which year would you choose so as to get maximum value?

To get the answer, I used the offense-only version of Baseball-Reference's Wins Above Replacement, abbreviated oWAR and simply added up the yearly totals for the eight men guaranteed starting jobs. For seasons in which a player was not active, I simply entered zero, representing a replacement-level player. I did the same for the catcher position, which, going into the 2013 season, is the definition of replacement level, though in practice it could fall short of even that. With Youkilis and Granderson entering the league in 2004, the same year that Hafner first qualified for the batting title, and Cano arriving in 2005, I started my search in the 2004 season (Teixeira's second in the majors).

By that method, even with Gardner not reaching the majors until 2008, the Yankees' projected 2013 lineup peaked in... 2007. The top seven men in the Yankee lineup combined for 31.5 offensive wins above replacement in 2007, with Jeter and Granderson leading the charge at 6.1 and 5.8 oWAR, respectively, Suzuki pulling a solid 5.2, and Teixeira and Cano both worth four or more wins as well. Youkilis and Hafner were actually passing each other on the way up (and down) the productivity ladder that season. Youkilis was in just his second full season as the Red Sox's first baseman in 2007, while Hafner suffered a steep drop in power that marked the end of his brief three-year reign as one of the top offensive forces in the game. Youkilis would be better in each of the next four seasons, but Hafner would never again reach even his 2.5 oWAR from that season.

One of the more striking things about that finding is just how long it has been since Hafner has been a major offensive force. He hasn't stayed healthy enough to qualify for a batting title in any of the last five years, with his single-season highs over that span being 16 home runs, 57 RBIs, and a .280 batting average. He's still an on-base machine and good for a 120 OPS+ each year, but he has played in 100 games just once over those last five seasons, and he hasn't been worth more than those 2.5 wins, effectively league-average value from an ostensible starter, in six years.

However, the most striking thing about the oWAR totals of the projected 2013 Yankees lineup is the shape of this graph: 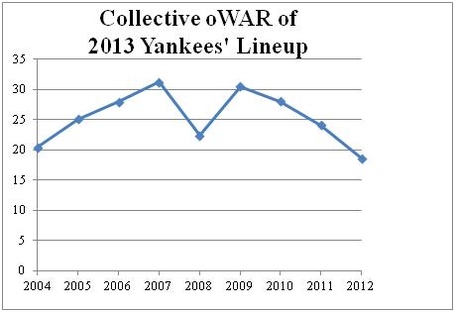 You can close the drawbridge over 2008. That was the year that Cano fell into some awful habits at the plate and was effectively replacement level with the bat, and Hafner wrenched his shoulder and hit .197 with just five home runs on the season. Both rebounded in 2009, but not even the arrival of Gardner in 2008 has been able to slow the collective decline of the 2013 Yankees lineup since. Last year, the Yankees eight intended starters were worth a mere 19.9 oWAR, less than 64 percent of their 2007 value despite a career-year from Cano and a surprisingly strong season from the 38-year-old Jeter (his second-best since '07). That graph is as clear an illustration of the hill the Yankees' hitters are over as one could imagine. Even my three-year-old could tell you where the next dot on that line is mostly likely to be.

It's true that Gardner, the youngest man in the Yankees' 2013 lineup, missed most of last season due to an elbow injury and will break the group trend by posting a higher value this year, but Hafner, Suzuki, Youkilis, and Teixeira, a group that includes all three of the additions the Yankees made to their lineup this offseason, were all worth fewer than two wins above replacement at the plate. Meanwhile, the men the Yankees let go this offseason, Nick Swisher, Russell Martin, and Eric Chavez, averaged 2.3 oWAR last year. That 2.3 oWAR also happens to be exactly value the 2012 Yankees got from the bat of Alex Rodriguez.

Rodriguez, by the way, was worth a career-high 9.3 oWAR in 2007 and won the American League Most Valuable Player award that year. A couple of other 2007 seasons worth noting: CC Sabathia won the AL Cy Young award, Andy Pettitte, in his first year back with the Yankees, threw 215 1/3 innings and was worth 3.5 wins above replacement, his second-highest total since 1997, and Joba Chamberlain was almost untouchable in his late-season debut, posting a 0.38 ERA in 24 innings of relief.

The Yankees aged lineup does not mean they have no hope for the coming season. They're bringing back the same pitching staff, and even though there are some ague issues there as well (Pettitte will be 41 in June, Mariano Rivera, coming off a year lost to injury, is 43, Hiroki Kuroda is 38), there are also plenty of twentysomethings and no collective downward trend. That said, if watching the Yankees' slowing bats gets you down this season, just throw on some Amy Winehouse and think how good this team would have been back when George W. Bush was president. That should cheer you up.