The Fonz-Yankee reunion was delightful in 2013, but can the Yankees expect similar production out of a 38-year-old Soriano in 2014?

As the trade deadline approached, the Yankees' offense appeared to be spiraling into oblivion. The absences of Mark Teixeira and Alex Rodriguez accompanied by the off-season departures of Nick Swisher and Russell Martin left the Yankees with poor power power numbers, especially from the right side. They arguably hit their nadir on July 25th, by which time the Yankees amazingly had only homer from the right side in the past 56 games. If the team was going to make a playoff run of some kind, they absolutely needed more firepower. So on July 26th, they turned to an old friend: former second baseman Alfonso Soriano.

The Yankees sent low-minors righty Corey Black to the Cubs in exchange for the 37-year-old veteran, and they agreed to take on $1.8 million of Soriano's 2013 salary and $5 million of his 2014 total. It was mostly a salary dump move, and it worked like a charm for the Yankees. In 2012, Soriano hit 32 homers, his highest total in a season since a 33-homer campaign during his the first year of his deal with the Cubs, 2007; that was thought to possibly be a classic "dead cat bounce" year since his game slowed in recent years prior. He had 17 homers and a .467 slugging percentage with the Cubs at the time of the trade though, so there was a chance he could bring some of that old power back.

Soriano started his second tenure in the Bronx slowly, as he had a mere .547 OPS through his first ten games. Only a four-hit game that featured his first homer back in New York and a walk-off single saved that OPS from utter disaster. However, for the rest of August, he was on fire. Soriano hit 11 homers in just 23 games, notching a 1.003 OPS as the Yankees got hot as well. He hit a personal milestone with the 400th homer of his 15-year career. They surged back into the Wild Card race with a 15-8 record. He didn't seem too bad in the outfield, either, occasionally making excellent catches. His bat slowed down a little bit in September with an .818 OPS that was still quite good. He remained one of the few Yankees capable of damage at the plate as the Yankees stumbled to the finish line. Overall, Soriano hit an incredible 17 homers with the Yankees in 58 games, a 47-homer pace over a full 162-game season. His 34 homers were the most he hit in a season since his career-high of 46 set with the Nationals during his 40/40 season in 2006.

To hope for the same production from Soriano in 2014 would be setting expectations too high. That bit of half-season excellence was unsustainable, as Soriano barely had any cold streaks, which must inevitably happen as the full season runs its course. He will turn 38 in January, and he still doesn't walk very much. He's not immobile on the basepaths, as indicated by his 18 steals in 2014, but the days of his 40/40 bids are long gone. His game is built around his power, and when he's not hitting homers, he becomes a frustrating player to watch, given his high strikeout rates.

At the same time though, I don't think it would be too much to expect Soriano hit at least 25 homers, a figure he's mat each of the past three years without a problem. He's stayed mostly healthy since undergoing knee surgery in the 2009-10 off-season, so he should be able to stay on the field; he's never played fewer than 109 games in a season since becoming a full-time player in 2001. Since the Yankees only have to pay $5 million of his $18 million dollar salary, the last year of his big eight-year, $136 million contract, he could certainly give the Yankees high production for not much value. Soriano was one of the few bright spots of the 2013 season, and as long as the Yankees can bring Robinson Cano back, Soriano should continue to fill his role as another dangerous power bat in the lineup. He made pitchers think twice about pitching around Cano in 2013, and if he can do that again in 2014, then he'll be doing his job.

It's good to have Sori back. 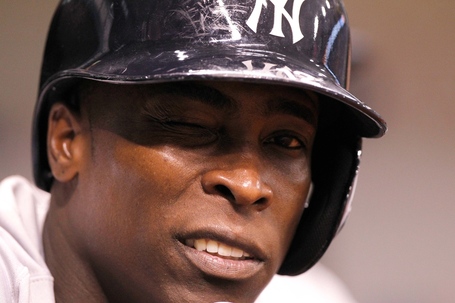