Come on a journey down the rabbit hole of the minor-league career of perhaps the Yankees' most bizarre pitching prospect.

Share All sharing options for: Know Your 40: Dellin Betances 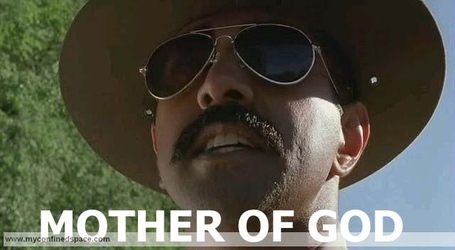 What’s that? I can’t just summarize Dellin Betances’s 2012 season and floundering status of relevancy in the New York Yankees’ system with that image? Well, fine.

Once upon a time, Betances was a prospect with much promise in the organization. Selected in the eighth round of the 2006 MLB Draft from New York City’s own Grand Street High School, his intimidating size and tantalizing short stint in Rookie Ball at the end of ’06 (seven starts, 1.16 ERA, 3.86 K/BB) immediately put him onto some Top 100 prospects list at the age of 18. Betances immediately took a step back the next year thanks to injuries including a broken foot and elbow problems caused by a ball back to the mound. They limited him to only six starts for short-season Staten Island, and even in that small sample, his strikeout-to-walk ratio got cut in half to 1.71. It was a sign of what was to come from Betances, who to this day continues to be plagued by control problems despite reaching as high as 97 mph on the radar gun while also holding a changeup and sharp curveball in his repertoire.

Betances missed a month in ’08 due to sore shoulder, but he posted a 3.67 ERA and 3.69 FIP with Low-A Charleston in 22 starts, earning a promotion to High-A Tampa in ’09. He never got off the ground that year though, as elbow pain restricted him to 11 starts with a 5.48 ERA and a dismal 1.63 K/BB. The Yankees decided he needed UCL Reinforcement surgery, which kept him on the shelf for about a full calendar year. The surgery was far from a death sentence—Mariano Rivera had the very same procedure in 1992. Indeed, when Betances returned in 2010 with Tampa, he was better than ever. He held Florida State League hitters to a .168 average in 14 starts there, pitching to a 1.77 ERA and 1.83 FIP, but the most impressive numbers were his 0.873 WHIP and 2.3 BB/9. It was a significant step forward, and Betances ended the year with three starts at AA Trenton.

Entering 2011, Betances was ranked third in the Yankees organization by Baseball America behind only hard-hitting catchers Jesus Montero and Gary Sanchez, and he was ranked 43rd overall in baseball. The Yankees were expecting more steps forward from one of their promising "Killer B’s," but what they got instead was… eh. In 21 starts with Trenton, he again struggled with control as his K/BB shrank to 2.09 while his WHIP and BB/9 ballooned to 1.339 and 4.7, respectively. It was not all bad though—Betances seemed to always find a way to work out of the many pitching jams caused by his woes with location. A .217 average against demonstrated that batters still had their own problems when facing him, and he had a 3.42 ERA and 3.70 FIP when he was called up to AAA on August 18th. It was a classic case of being "effectively wild." Betances only spent four starts in Scranton with no real new developments, and ended the season making his major-league debut with two games in the pros.*
*NB: A fun trivia question for Tampa Bay Rays history: Who started the famous Game 162 for the Yankees as the Rays fought for their playoff lives? Betances. To the Yankees, that last game had absolutely no importance for them.

After that up-and-down ’11 season, it appeared that if Betances improved his control, then the Yankees could give him a shot at the major-league level. Since CC Sabathia, Andy Pettitte, and Michael Pineda all missed various lengths of time due to injury and both Ivan Nova and Freddy Garcia were ineffective, Betances certainly might have had a chance. Unfortunately for him, 2012 was an unmitigated disaster. Betances began the year in AAA, but after 16 starts, he was not even "effectively wild" anymore. His WHIP was a terrifying 1.875 in addition to those poor numbers at the top of the page and he was fooling basically no one at the AAA level.

Disappointed with him, the Yankees sent him down to AA Trenton at the end of June, a huge step in the completely opposite direction. Somehow, he might have been even worse in 11 games at AA, as opposing hitters knocked him around to the tune of a .313 average (66 points higher than at AAA). He was able to cut his walk-rate to 4.76 and the batting average was certainly affected by a .392 BABIP, but these were very small silver linings. A 4.76 BB/9 is not anything to brag about anyway. His season ended with shoulder inflammation and a fairly mediocre stint in the Arizona Fall League. Betances tinkered with a slider in the AFL, and his numbers were better than his regular season. That is not really saying much though since again, his regular season was absolutely atrocious, and the competition was equivalent to only AA (if that).

Betances’s spot on the 40-man roster is almost assuredly in some jeopardy. He’s been protected on the 40-man since the end of the 2010 season, but after the disaster that was his 2012, who even knows what to expect from him? His pitching arsenal has always impressed people and put him onto top prospect lists, but results are results. He’ll be 25 in March, so he’s not getting any younger. If he wants a future with the Yankees, the goal will once again be the same for Betances: For the love of God, find the freaking plate. Please.