Are the Yankees desperate enough to add Michael Young?

Share All sharing options for: Yankees trade rumors: Michael Young available, but should the Yanks bother?

In their long search for competency from the right side of the plate, the Yankees have been rumored to be interested in former Rangers All-Star and current Phillies infielder Michael Young all season long. Phillies GM Ruben Amaro hesitated about giving up on the season, but the Phightins' eight-game losing streak has almost completely pushed them out of contention. They now sit 11 games behind the Braves in the NL East and 9.5 games behind the Reds for the second NL Wild Card. Now, Amaro appears ready to finally wave the Gaudin:

PHI has reached out to other teams to let other teams know that players are available, including Michael Young. Cliff Lee not on the list.

There are a few other teams known to be interested in bringing Young aboard as well. Gordon Edes said that the Red Sox, Orioles, and Rangers were all involved in trade talks for Young. The Rangers' stance seems to have changed though, as T.R. Sullivan of MLB.com reported on Saturday night that Texas does not want to bring Young back, and that a trade between them will not happen. So it appears that, barring the entrance of any mystery teams into the fray, Young is likely on his way to the AL East, but to which team? He has a full no-trade clause, so if the Phillies find the right deal, it would ultimately be up to him.

Young is making $16 million this year, the last season of a five-year, $80 million signed with Texas prior to the '09 campaign. However, the team acquiring him would likely only have to pay a pro-rated cut of the $6 million that the Phillies agreed to when they traded for Young in the off-season (Texas is paying $10 million). Young's expiring contract, affordability, and status as arguably the best bat presently known to be on the market thus makes him look attractive, but there are plenty of concerns with his game.

Young has experience all around the infield, and has most often played third base since

Suspension on the way for A-Rod? 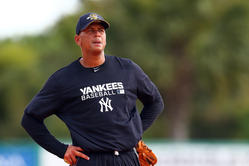 grudgingly moving from shortstop to accommodate Elvis Andrus in 2009. (The myth that he's a good clubhouse guy should have died after his second trade demand in which he ignored his declining defense, yet it still lives on ). He could split time around first base, third base, and DH if the Yankees acquired him, although it seems like he would mostly play third since there is a gaping hole at the hot corner with Alex Rodriguez's availability in question. Unfortunately, Young is an absolutely horrible third baseman (and first baseman for that matter):

Even if Young brings great value on offense, it's certainly possible that it would be negated by his rock glove, as evinced by his overall 0.2 fWAR this year. At the plate, he's rebounded from an awful 2012 (79 wRC+ in 156 games) to a respectable .277/.342/.402 triple slash with 18 doubles, seven homers, and a 106 wRC+. At first, those might seem like righty numbers that could help the Yankees since they've struggled so much against lefties, but...

Welp. Young has carried a weird reverse platoon split this year despite having the opposite problem in 2012 (112 wRC+ vs. LHP in 167 PA, 67 wRC+ vs. RHP in 484 PA). So which is the real Michael Young at this point? His career numbers would suggest more success against lefties than he's had in 2013, and a .231 BABIP vs. LHP adds credence to this theory. It's just hard to say for sure with a guy turning 37 in October. How much should the Yankees gamble that his 2013 struggles against southpaws are an anomaly?

Much has also been said about Young's "clutch hitting," a questionable claim as well. Young has been decent, albeit without power, in "Late & Close" situations this year in 53 plate appearances (seventh inning or later with the batting team tied, ahead by one, or the tying run at least on deck), hitting .311/.415/.311. In 143 plate appearances in tie games, he is hitting .311/.364/.432. The counterargument to those numbers are his statistics when in high leverage situations by WPA standards, a measly .210/.319/.258 in 72 plate appearances, and when his team is trailing in the game, .217/.302/.278 in 129 plate appearances. Several of these splits are not in an enormous selection of sample size, but the conflicting reports are enough to confirm that Young's "clutchiness" is probably overstated.

Young is not a terrific baseball player at this point, but the Yankees' righthanded options have been atrocious until the recent returns of Alfonso Soriano and Derek Jeter. If the Phillies are willing to not take much in exchange for the bit of salary relief on Young, it might be worth the Yankees' time to get him if they play him properly (read: as infrequently in the field as possible). It seems doubtful that the Phillies would ask for such a meager return though since Young's bat is coveted by several teams. Furthermore, since the Yankees have been willing to use declining defenders at third base recently in A-Rod and Kevin Youkilis, I see no reason why they wouldn't be willing to do the same with Young, especially since the starting options right now are Jayson Nix, Brent Lillibridge, or the recently-demoted David Adams. Again though, would the gamble on Young's reversal of fortune against lefties be worth potentially sacrificing defensive value?

I'm not so certain the gamble is worth it, but given ownership's recent history of overruling Brian Cashman to acquire veterans, it almost seems inevitable that Young will be wearing pinstripes within the next week. They can't like that he could possibly go to a division rival, too, since both the O's and Red Sox are in on Young. If management already knows through their own sources that A-Rod is going to be suspended without possibility of appeal, then the decision could be made already. At this point, I'm just hoping that whoever the Yankees might surrender in a trade with the Phillies isn't a prospect with great potential. If it's a Corey Black level guy, I'll get over it, but if it's someone who could be in the Top 10... well, Young better convince himself it's still 2011.

If anyone needs me, I'll be doing this over the fact that I just wrote 1,000 words about the Yankees possible trading for Michael friggin' Young.