Share All sharing options for: MLB Trade Rumors and the Yankees: Konerko, Hart, Hughes, and Utley

The trading season is fast approaching and now rumors of who might be selling who are starting to fly around. Whether the Yankees are buyers or sellers they have plenty of options to choose from.

The Yankees are talking to the recently released Ian Stewart about a minor league deal. He has other offers, so he is currently weighing his options. The funniest thing about this is that he was released for bad mouthing the Cubs organization on Twitter because he hadn't been called up, despite hitting .168/.286/.372 in Triple-A. He would fill a need at Scranton because of all the injuries, but the organization does not see him as a major league option (maybe). 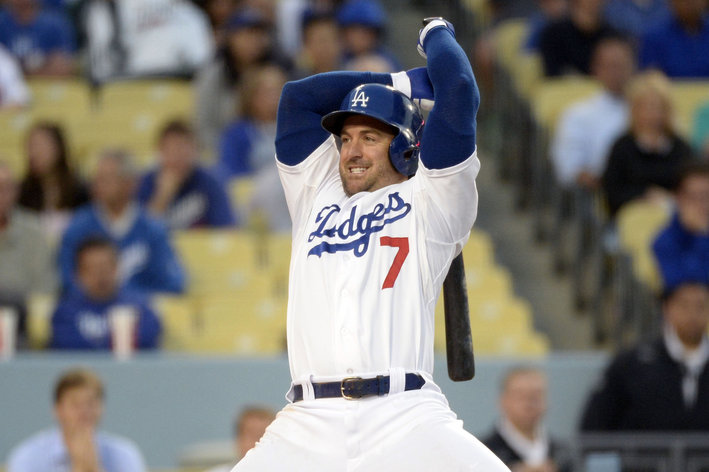 This team needs someone who can hit lefties

The White Sox are not looking to trade Paul Konerko, despite being 37 with $13.5 million owed to him in what will likely be his last season. They probably want him to retire as a White Sock, but if the organization is going to try and rebuild, it would make sense to trade as many valuable players as they can. Konerko might be old, but he has a 142 wRC+ against lefties, something the Yankees need. Further Reading: Are the main targets on the first base trade market all they're cracked up to be?

That could make Justin Morneau a likelier target for the Yankees, however, there are still problems with this scenario. He is owed $14 million, the Twins actually want prospects back, he's hit for very little power (3 HRs), and he can't hit lefties (64 wRC+). He would be a much more expensive replacement over Lyle Overbay, but I find it hard to believe the Yankees would do all of that for such a marginal upgrade. Further Reading: Yankees' first baseman trade targets

The Brewers' Corey Hart will have season ending surgery on his left knee after he injured it while overcompensating for his surgically repaired right knee. He had yet to play a game in 2013, but he could have been an option in the outfield and first base for the Yankees.

The Nationals and the Padres are hovering around .500 and are both looking for pitching. The Yankees could offer either of them Phil Hughes, though San Diego would be the better fit for him. Yankee Stadium is one of the most homer-prone ballparks in MLB, while Nationals Park is a little less, but the spacious Petco Park would do wonders for him. Ivan Nova could also be a trading option. The Nats might be desperate enough and the Padres already took Nova in the Rule 5 Draft a few years ago. Further Reading: Trading Phil hughes: Where would he fit in?

Ruben Amaro, the Phillies' GM, is hesitant to start selling off pieces of his team, despite the fact that they are 7.5 games out of first place and 6.5 games outside of a Wildcard spot. Chase Utley could be useful for the Yankees if they use him at first base, but Amaro wants him to be a Phillie for life. Utley has dealt with injury and, as a 34-year-old middle infielder, the long term contract boat has kind of sailed. If they do trade for him, his 132 wRC+ would instantly make him one of the best hitters in the lineup. The Yankees could use Carlos Ruiz and, despite his down year (74 wRC+), he would still be an upgrade at the catching position. The Yankees and Red Sox could both be eyeing Michael Young to play third base as his 129 wRC+ against lefties would make him their best right-handed option. Once Alex Rodriguez returns he could platoon over at first base or in the DH spot. Further Reading: Phillies not selling off longterm contracts

Robinson Cano's next contract: Waiting is the hardest part

Joba Chamberlain Struggles: What do the Yankees do with him?