If the Yankees decide to trade their best player, what kind of prospects could they expect in return?

Share All sharing options for: Hot Stove: Should the Yankees trade Robinson Cano?

The Yankees are apparently far apart in extension talks with Robinson Cano, despite his new representation, and he could end up as a free agent. If that happens, teams like the Dodgers will be able to bid on him and jack up the cost, in years and dollars, for his services. Hal Steinbrenner seems more interested in pinching pennies than spending the money to field a competent team and on top of that, the team's core is on its last legs. If they don't plan on keeping Cano then there is an argument to be made for trading him to a contendor and getting some prospects back.

Trading Phil Hughes: Where would he fit in? 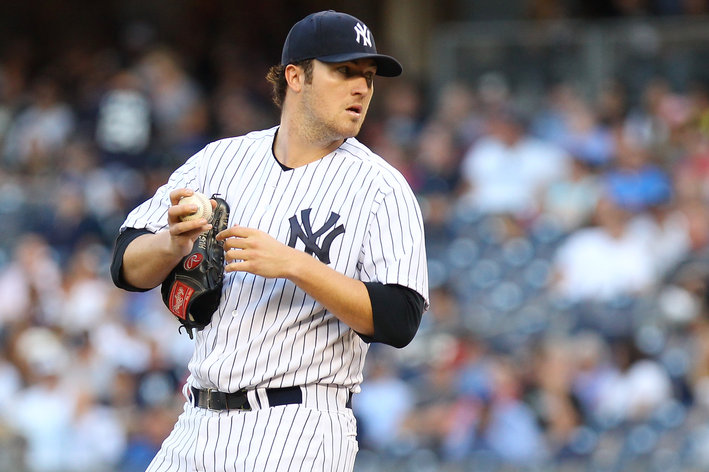 Where could Phil succeed?

While you can't expect much in return for a rental player, there is a precedent for top prospects being traded for the chance to win now. In 2011 the Giants traded Zack Wheeler to the Mets for Carlos Beltran. Wheeler was their top prospect and ranked as the 55th best prospect in baseball, according to Baseball America. Beltran was 34 years old and a 3.2 WAR player with the Mets before coming over to San Francisco. You might say that Robinson Cano would bring more back in a trade than one prospect, since he is four years younger and plays a much more premium position, but at the same time, he's only been a 2 WAR player this season. Maybe it all evens out, or maybe the Yankees can get a package of prospects.

From the teams over .500 that are in contention for a playoff spot, only a few have need of Cano (124 wRC+). The Athletics could do better than Eric Sogard (87 wRC+), the Diamondbacks could improve on the previously injured Willie Bloomquist (career 78 wRC+), the Pirates could upgrade from Neil Walker (108 wRC+), and the Tigers could use someone better than Omar Infante (105 wRC+).

Each organization possesses some of the best prospects in baseball, as well as other interesting pieces that could be important to the Yankees.

The Yankees need help almost everywhere, but I personally like Sonny Gray, who could help fill a rotation spot in 2014 with his 9.17 K/9, and Matt Davidson would give the Yankees a legitimate third base prospect to replace the struggling David Adams and allow Alex Rodriguez to transition to DH. Alen Hanson could be the shortstop of the future after showing 15+ HR and 30+ SB potential, and Nick Castellanos could replace Curtis Granderson and help negate Vernon Wells and Ichiro Suzuki in the outfield. On top of one of those, the Yankees could get another prospect or two of lesser value that could still be useful.

In all likelihood Cano will re-sign with the Yankees for an exorbitant amount of money that they will one day regret, but sometimes strange things can happen. They let Andy Pettitte sign with the Astros a few years back, so it could happen again. Whatever they end up doing, if Cano isn't back with the team in 2014 it will be clear that the teamhas reached rebuild mode. The Yankees are the Yankees, so that could mean anything, but trading him might not be the worst idea ever, given the need for young talent.