It was not the cleanest of victories, but the New York Yankees secured a much-needed win today, salvaging the final game of a three-game set at Tropicana Field against the Tampa Bay Rays. They regained sole possession of the first place with the Baltimore Orioles' loss as well. The offensive star of the game was none other than beleaguered catcher Russell Martin, who finally moved his batting average over .200 with a two-hit game. Martin has hit lefthanded pitching much better than righthanders this year, so his success might not have been a total surprise, but it was still great to see. The first knock was a two-run ground-rule double in the top of the fourth inning, and it gave the Yankees a 3-1 lead against Rays rookie Matt Moore. The double came at an opportune moment, as Alex Rodriguez had just snapped the Yankees out of a 11-inning scoreless streak with a RBI double of his own that drove in Derek Jeter to tie the game at one.

Yankees starter Hiroki Kuroda did not have his best stuff today, and he turned in arguably his worst start of the second half. Entering today, he had pitched to a 2.39 ERA since the All-Star Break, so "worst start of the second half" should be taken with a grain of salt. Kuroda held the Rays to four runs on eight hits in six innings. He did cough up the 3-1 lead on a two-out, two-run triple by Ben Zobrist in the bottom of the fifth though, which allowed Martin to come to the plate in the sixth with a chance for another go-ahead hit. Robinson Cano and A-Rod struck out in front of him, but Martin drilled a slider to left field for a solo home run. The pitch was right down the middle, and Martin crushed it. 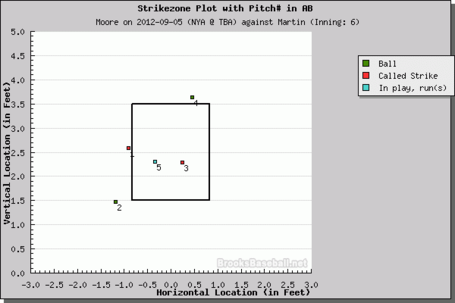 Kuroda gave the lead right back when first baseman Luke Scott blasted a solo homer of his own in the bottom of the frame to tie the game. Against a tiring Moore though, the Yankees got back-to-back singles from Andruw Jones and Steve Pearce to begin the seventh, and Jayson Nix sacrificed them to second and third. Before the game, Joe Girardi dismissed hitting coach Kevin Long's post-game comments from last night about the addition of bunting to the team's offensive strategy, but Nix was not a bad player to try it with since the top of the order followed him.

Of course, the bunt was almost pointless when Jeter sent a grounder toward second base with the infield in. Before the game, Rays manager Joe Maddon decided to put Zobrist at shortstop and play primary starter Elliot Johnson at second base tonight even though Zobrist had much more experience at the position. Johnson airmailed a throw to home plate, scoring both pinch-runner Ichiro Suzuki and Pearce. The Yankees held a 6-4 lead, thanks to some shoddy Rays defense.

Lefty Boone Logan relieved Kuroda in the seventh with mixed results. He struck out Ben Francisco, walked Desmond Jennings, and then struck out Zobrist. Evan Longoria singled against David Robertson to bring Matt Joyce to the plate as the go-ahead run. However, the righthander got Joyce to lift a pop-up to short right field, which Jeter chased down. He was limping after the play, but he stayed in the game. Robertson pitched a painless 1-2-3 eighth, striking out Jeff Keppinger and B.J. Upton to end a solid relief outing. Rafael Soriano also retired the side in order in give the Yankees a 6-4 victory.

The Yankees now head to Baltimore a game in front of the Orioles and 2.5 ahead of the Rays. A crucial four-game series at Camden Yards begins tomorrow night with David Phelps taking on Jason Hammel.