Rebuilding After an Epic Baseball Collapse

After the Braves clinched a playoff spot, New York Times’ columnist Tyler Kepner marked the occasion by commenting about how “teams almost never recover from an epic collapse” like the one Atlanta experienced last season. After all, one need only look at the ruins in Boston to see what can happen when everything comes tumbling down so suddenly.

Share All sharing options for: Rebuilding After an Epic Baseball Collapse

While evaluating the Yankees’ flirtation with an epic collapse, I, like Kepner, also operated under the assumption that blowing a big lead and missing the playoffs would not only serve as a stigma, but also lead to a hangover. However, is that really the case? Do epic collapses almost always carry over to the next season? Or, do we only remember the ones that reverberate for seasons to come? 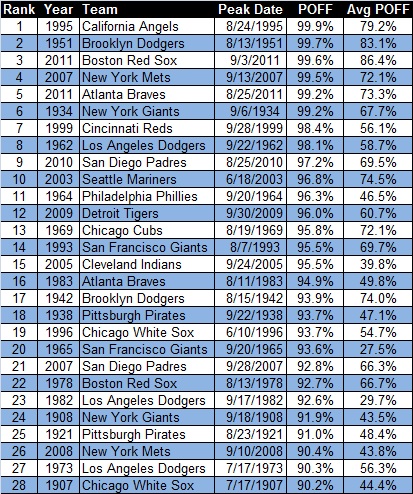 Note: Ranked in order of teams with the highest playoff probability during a season in which they did not make the playoffs. For an explanation of how average (Avg POFF) and peak playoff probability (POFF) is calculated, click here.
Source: coolstandings.com

What constitutes an epic collapse is subjective. Does a large blown lead, such as the 14 ½ game advantage gradually forfeited by the Red Sox in the second half of 1978, qualify as the most significant? Or, does the inability to win a game or two in the final week, like the Mets in 2007, have greater weight? There’s no right answer, but thanks to the playoff odds calculated by coolstandings.com, we can use an objective criteria to define epic. Coolstandings uses simulations to calculate a team’s chances of making the playoffs, and keeps track of the probability for each day. With that data, the site spits out the average playoff probability for each team, but also reports a peak reading. Since 1901, 28 teams have registered a 90%-plus chance of making the postseason at some point during a season (the peak) in which they ultimately did not advance to October. By comparing the performance of those teams in the following season, we can test the theory that epic collapses almost always require an extensive rebuilding period.

The Year After: Team Records Following a Collapse 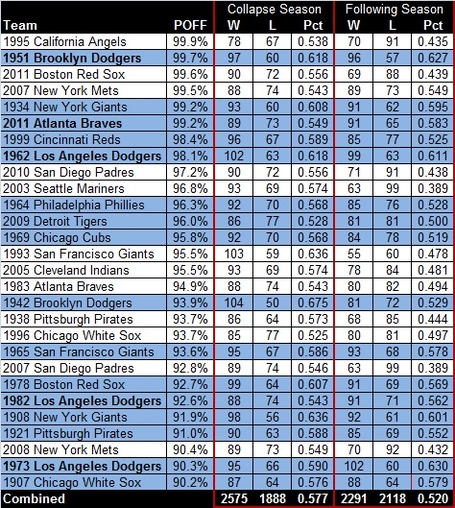 Note: Blue shading represents teams that followed up with at least a .500 season. Bold indicates teams that made playoffs in the next season.
Source: coolstandings.com and baseball-reference.com

During the year in which they suffered a collapse, the 28 teams that blew at least a 90% chance of making the playoffs compiled a winning percentage of .577, versus .520 in the following season. Although a significant drop off, it’s hard to make dire inferences from the aggregate decline. In fact, 17 teams from the sample had at least a .500 season in the following campaign, including six that actually wound up having a better winning percentage and five who recovered to make the postseason. In other words, while the overall trend was down, a disastrous transition like the one that engulfed the Red Sox in 2012 has been no more prevalent than a bounce back campaign. 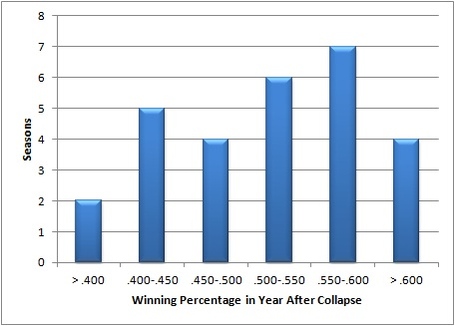 Based on the data presented above, it is inaccurate to say that teams almost never recover from an epic collapse. However, there is a caveat that restores some credibility to the contention. Before the Braves clinched a playoff slot, the other four teams to make the postseason following a collapse were all Dodgers. Remarkably, five of the 28 greatest collapses have been authored by the franchise (two in Brooklyn in three in ), and on four occasions (the only exception being the war torn 1943 season), the organization dusted itself off by finishing in first place the following year. So, although a post-collapse rebound isn’t that unprecedented for all teams, it is for those without Dodgers emblazoned across their chest.