This Day in Yankees History: Last Stand for "Mighty Mite"

Share All sharing options for: This Day in Yankees History: Last Stand for "Mighty Mite"

There were few sadder days in the history of the New York Yankees than what happened 83 years ago today. On September 25, 1929, the first great leader of the Yankees passed away at the young age of 51. The diminutive man's name was Miller Huggins, and he was the tough manager of the Yankees' first three World Series championship teams.

The pre-Ruthian Yankees were not a renowned baseball club by any stretch of the imagination. During their 15 years in the American League prior to 1918, they won nothing and were only even competitive in a handful of seasons. However, the team's fortunes began to change when brewmaster Colonel Jacob Ruppert purchased the team with the help of Captain Tillinghast L'Hommedieu Huston for $460,000 from its original owners Frank Farrell and Bill Devery in December 1915. The new owners retained the old manager, "Wild Bill" Donovan since he was popular with the players and had only one season under his belt as skipper thus far. The Yankees had their first over-.500 finish in six years in '16 at 80-74, but they stumbled back the next season to 71-82. Unimpressed with Donovan's performance, Ruppert and Huston informed him that they would not retain him for the 1918 season.

Cap. Huston knew who he wanted for the job--an old friend of his, Brooklyn manager Wilbert Robinson. The former Baltimore Oriole affectionately known as "Uncle Robbie" often hunted and drank with Huston; he was also a fair manager, guiding Brooklyn to its first World Series appearance in '16 by virtue of winning the National League pennant. However, Huston was away in France fighting in World War I, so Ruppert felt it was his responsibility to select the new manager. He interviewed Robinson, but did not feel strongly about him. Instead, Ruppert interviewed a man ten years younger than Robinson, Miller Huggins.

Huggins, known in his playing days as "Mighty Mite" for his small stature (5'6", 140 lbs.), was highly recommended by AL President Ban Johnson, who knew he was much better than his 345-415 record with the St. Louis Cardinals would have many believe. Huggins was a quiet lifelong bachelor with a law degree, and using his intelligence, he was capable of holding his own against men who towered over him. He was "an unyielding fighter," and he both won Ruppert over and earned the players' respect. Much to Huston's dismany, Huggins was hired. The Yankees made a small improvement to a .488 winning percentage in the war-shortened '18 campaign, and after that, they finished in the second division exactly once throughout the remainder of Huggins's tenure.

In '20, the Yankees fought down to the wire with the eventual World Series champion Cleveland Indians and the controversial defending AL champion Chicago White Sox (the "Black Sox"), but they finished a mere three games behind the Indians in third place. Huston seethed as Robinson guided Brooklyn to another NL pennant, though they lost to Cleveland in the World Series. Huggins did an admirable job controlling his new superstar, Babe Ruth, who adored the spotlight and considered himself above curfew rules. Now working with general manager Ed Barrow, whose keen eye for talent helped the Yankees gather many stars, they won their first AL pennant the next year with the finishing blow coming on September 25th, when they thrashed the Indians 21-7 to seize sole possession of first place with six games to go. The two teams had been within a game of each other for most of September, but the Yankees maintained this lead for good. Two years and two more AL pennants later, the Yankees finally beat the crosstown rival New York Giants after two failed attempts in the World Series. Huggins was undoubtedly the right man for the job.

The Yankees finished a couple games behind Walter Johnson's Washington Senators, who won their first AL pennant in '24, and had a season from hell the next year as Ruth missed over 50 games with a stomach ailment. At .448 and in seventh place, it was the worst finish of Huggins's Yankee career. The team rebounded in '26 and captured its fourth AL pennant (securing the flag on September 25th), but despite taking a 3-2 World Series lead back to Yankee Stadium, they dropped both Game 6 and Game 7 to Huggins's old Cardinals to lose the seven-game classic. Again, they rebounded, this time with a flourish, and the '27 Yankees were one of the greatest teams in the history of baseball. Thanks to the powerful contributions of another soft-spoken man similar to Huggins in character named Lou Gehrig, they won a then-AL record 110 games, clinched the pennant by mid-September, and swept the Pittsburgh Pirates away in the World Series, an unprecedented 4-0 whitewash. The '28 Yankees were shafted with the unenviable task of following that epic team, but even though they let a 13.5 game lead on July 1st fall into a small deficit behind the red-hot Philadelphia Athletics on September 8th, they took the lead back and won the pennant by 2.5 games. They avenged their '26 World Series loss to the Cardinals with a second consecutive sweep. Thus, Huggins was a two-time defending World Series champion when he fell ill late in the '29 season.

Huggins had a painful carbuncle on his cheek that kept him from managing on September 15th, and he was admitted to St. Vincent's Hospital the next day. As coach Art Fletcher took over the Yankees for him, doctors diagnosed Huggins with erysipelas, a bacterial skin infection. The disease spent little time attacking the 51-year-old Huggins, and he was in critical condition when the Yankees hopped a train to Boston for a pair of games with the Red Sox . Somehow playing while their old manager stood on Death's Doorstep, they beat Boston 5-3 on the 24th, and they jumped out to a 5-2 lead by the third inning on the afternoon of the 25th. Meanwhile, Huggins fell into a coma as his siblings and the wife of Ruth's agent looked on. "Mighty Mite" lost his fight with erysipelas at 3:16 P.M.

The news reached Fenway Park shortly thereafter, and the flag was lowered to half-mast in the third inning. The players and fans were not yet informed, but it did not take a detective to figure out what had happened. The Yankees were told about Huggins's passing in the fifth inning, and it was met with a haunting silence. Center fielder Earle Combs could not hold in his emotions, and he wept on the bench. The game paused as both teams met at home plate, removed their caps, and the pubic-address announcer asked "for a minute of silent prayer in memory of Miller Huggins, manager of the Yankees, who has just died."

The game continued, though both teams were depressed by the news. The Yankees increased their lead to 7-2 in the sixth, but eight unanswered runs over the next two innings gave Boston a three-run advantage. Undeterred and fighting for a win in honor of their manager the Yankees rallied for three runs of their own to tie the game and they won it in 11 innings, 11-10. Second baseman Tony Lazzeri led the attack with two triples in a 4-for-6 performance, and Gehrig went 3-for-4 himself, driving in four runs. Had the events of the day occurred in a later generation, it surely would have been a "Yankees Classic."

All major league games were cancelled on the 26th in memory of Huggins as his funeral was held. Gehrig mused, "I'll guess I'll miss him more than anyone. Next to my father and mother, he was the best friend a boy could have... He taught me everything I know. He gave me my job. He advised me on salary... There never was a more patient or more pleasant man to work for. You can't realize that he won't join us again." Ruth often quarreled with Huggins, but he respected the man as well. He told the press, "You know how I feel about it. He was my friend... We all will miss him more every day."

Huggins's final marks with the Yankees were astounding: a 1,413-1,134 record, good for a .597 winning percentage in 12 seasons. He won six AL pennants, three World Series titles, and he was elected to the Baseball Hall of Fame for his feats in 1964. It was in '32 that his most iconic honor was installed--the very first monument in Yankee Stadium, placed at the base of the flagpole (which was located in dead center field until the stadium was remodeled in 1974-75). To date, he is still the only manager in Yankee history to receive this truly special tribute. 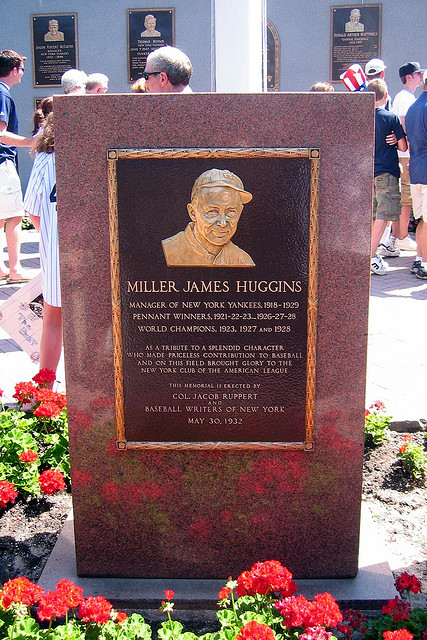 This work is licensed under a Creative Commons Attribution-NonCommercial-NoDerivs 2.0 Generic License.

Other sources: Appel, Marty. Pinstripe Empire: The New York Yankees from Before the Babe to After the Boss. New York: Bloomsbury, 2012.