Yankees Can’t Shake Orioles; Race Shaping Up as Closest Ever

Share All sharing options for: Yankees Can’t Shake Orioles; Race Shaping Up as Closest Ever

It's not what Yankee fans had in mind when the team took a 10-game lead in July, but this September has played host to one of the mostly contested division/pennant races in franchise history. For 17 straight game dates, beginning on September 3, the Yankees and Orioles have been separated by no more than one game in the standings, a stretch equaled or surpassed on only 17 other separate occasions and almost unprecedented in the final month of the season.

Yankees' Longest Streak of Dates within One Game of First Place, Since 1901 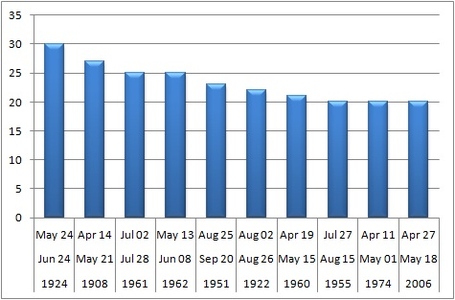 Note: Based on position at the end of game dates only (i.e., off days excluded).
Source: Baseball-reference.com

The last time the Yankees were involved in such a hotly contested September pennant race was 1951. For most historians of the game, that season registers as the year in which Bobby Thomson's "shot heard ‘round the world" helped the New York Giants win the pennant after overcoming a 13-game deficit to the Brooklyn Dodgers. However, across town in the American League, the Yankees were involved in a fierce battle with the Cleveland Indians. 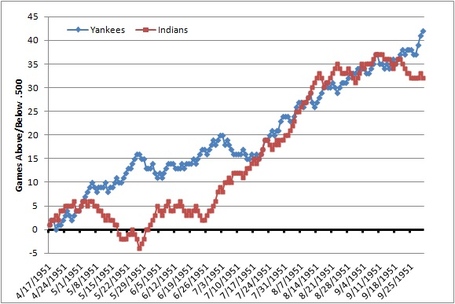 After falling behind by nine games in the middle of June, Cleveland staged a furious rally to not only tie the Yankees, but eventually take the lead. For 23 game dates (18 of which took place in September) beginning on August 25 and lasting until September 20, the Yankees and Indians remained within a game of each other, constituting the longest such span for the franchise during the final month. The Yankees finally pulled away from that point forward, winning seven of the last nine to end the season with a five-game lead. It may not have had the same drama as the pennant race between the Giants and Dodgers, but in 1951, the Yankees were certainly put to the test.

As in 1951, the Yankees hope September 20 will wind up being a launching point for another division title. However, the team's inability to create separation from the Orioles hasn't been for lack of trying. During the month, the Bronx Bombers have won 12 games, including eight of their last nine, but the Orioles have been one game better. Should the two teams continue to march in lock-step, this September will feature the highest percentage of dates that the Yankees have ever spent within one game of their closest competitor.

Highest Percentage of Dates Within One Game of First Place During September/October, Since 1901 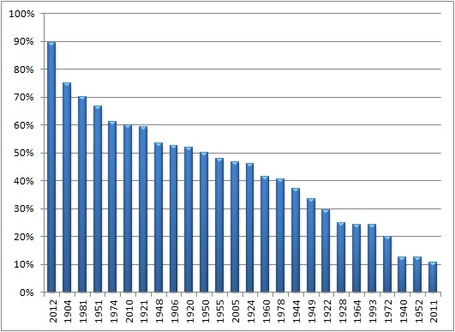 Note: Based on position at the end of game dates only (i.e., off days excluded). 1981 finish is based on total record from both season halves. Years not included had no dates within one game of first during the period.
Source: baseball-reference.com

Entering play this afternoon, the Yankees have spent 89% of September game dates with the Orioles nipping at their heels, which would rank as the highest rate in franchise history. The previous high of 75% was set in 1904, when the Yankees and Red Sox spent 33 of the last 44 dates within one game of each other. During that season, the two teams were also separated by no more than two games dating as far back as early August. Unfortunately for the then New York Highlanders, a ill-timed wild pitch by Jack Chesbro handed the 1904 pennant to the Pilgrims, representing the only time Boston bested their rival during a hotly contested pennant race. 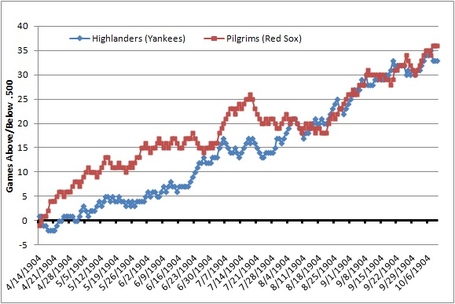 When all is said and done, this September could go down as one of the most pressure packed in franchise history. Having the wild card as a fallback certainly mitigates some of that tension, but because of the new playoff format, a lot is riding on the division title. Can the Yankees hold on like they did in 1951? Or will they succumb at the end as in 1904? The final 12 games will provide the answer, but, with the Yankees and Orioles both performing well down the stretch, a resolution probably won't be forthcoming until all of them have been played.