Has the Walk Off Become Cliché?

Share All sharing options for: Has the Walk Off Become Cliché?

On Thursday afternoon, Manny Machado's bloop single, which landed just under the outstretched glove of Matt Joyce, gave the Orioles a 3-2 walk-off victory in the 13th inning. After the winning run crossed the plate, the entire Baltimore team mobbed the 19-year old rookie, whose clutch hit allowed his team to hold onto a share of first place.

Later in that evening, the Twins also recorded a walk-off victory, beating the Royals 4-3 in 10 innings. Although the stakes weren't nearly as high, the celebration following Denard Span's game winning double was just as raucous. Judging by the horde of teammate who pummeled Span after his late game heroics, you'd have thought the Twins were also battling for first place. Instead, the victory allowed them to avoid taking over sole possession of the cellar.

Rate of Walk-Off Victories, Since 1973 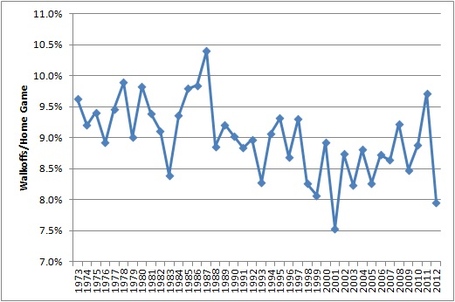 Not all victories carry equal importance, but, based on the celebrations that follow, every walk off has become cause for jubilation. It's hard to pinpoint exactly when post game pile-ups became part of the walk off routine (click here to see how the Yankees celebrated a walk off in 1985), but the site of players jumping for joy after a last minute victory has rendered the occasion cliché.

The Orioles' celebration after Thursday's victory was undoubtedly an expression of unmitigated joy and relief. With the pennant race coming down to the wire, every game has become magnified, so pulling out yet another one-run, extra inning victory was an accomplishment that justified exuberance. However, can the same thing really be said about the Twin's walk-off triumph? Any win is always welcomed, but were the Minnesota players really that excited to improve their record to 60-84? 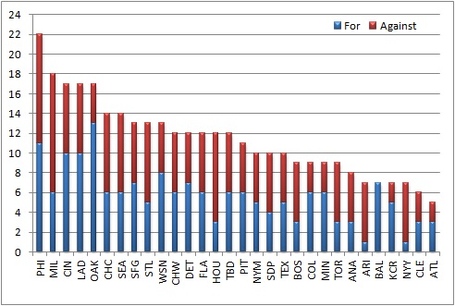 It's great to watch baseball players having fun on the field. After all, most of them are making millions of dollars to play a game they enjoy, so simply putting on a uniform is good enough reason to celebrate. However, are the emotions expressed really genuine, or have they just become an instinctive part of routine? What would happen if a team decided not to celebrate a walk-off by piling on top of each other? Would their commitment be questioned, regardless of the context? Although clearly not the most pressing questions facing the game, it is interesting to observe how players' behave on the field, and the elevation of the walk-off win to sacred status is one of the most extreme developments in that regard.

Aside from curiosity about the genuineness of walk-off emotions, one also wonders whether the increasing elaborateness of the celebrations will finally cross a line. Is it still possible to show up the opponent when the game is already over? It doesn't seem as if an unwritten rule has, well, been written on that topic just yet, so until then, it'll probably remain fun and games until somebody gets hurt. Just ask Kendrys Morales.