Share All sharing options for: The Fallacy of Derek Jeter's MVP Candidacy

Derek Jeter is in the middle of one of the finest seasons for an old shortstop in the history of baseball. Only Hall of Famers Honus Wagner and Luke Appling ever hit like Jeter has this year while in a similar situation. His 2012 season thus far of a .324/.368/.449 batting line is his best product since the championship season of 2009. Jeter's 194 hits lead the American League and his .324 batting average is third, seven points behind the league leader. With only 20 games to go in the season, his chances are not great, but it is possible for him to win his first career batting title at age 38. That would be an incredible story, even acknowledging the flaws of the batting average statistic. No one is questioning whether or not Jeter is having a great season.

The unfortunate byproduct of Jeter's revival is the resurrection of the hype machine that has always made Jeter out to be a better player than he actually is, which is quite the accomplishment since he is a future Hall of Famer already. Yet the media continues to further the notion that Jeter might be the AL MVP. 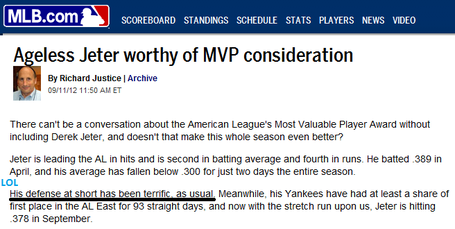 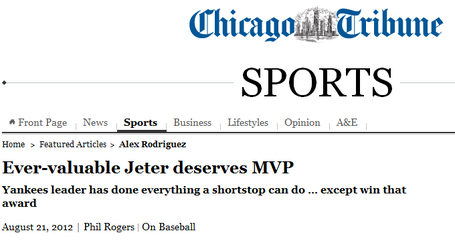 It should not be that surprising that YES Network is encouraging a Yankee for MVP; the channel is a Yankee brand after all. However, when national columnists from MLB.com and the Chicago Tribune are pumping the "Jeter for MVP" movement, it demonstrates that this idea has real support behind it. As great a season as Jeter is having though, the MVP talk should simmer down. It should not be asking too much to just enjoy an unexpected surprise like Jeter's 2012. There is no need to overrate and potentially gyp a deserving candidate like Mike Trout.

Earlier, it was mentioned that Jeter's .324 batting average is seven points behind the league leader. That man is Mike Trout. The 21-year-old outfielder from New Jersey missed the first month of the season while the Los Angeles Angels and manager Mike Scioscia decided to go with an outfield of aging veterans like Vernon Wells, Torii Hunter, and Bobby Abreu over Trout. It was not a terrible decision, as Trout only had a 89 wRC+ in 40 games with the Angels in '11 after making the jump from AA Arkansas and battled sickness in Spring Training. When he hit .403/.467/.623 in 20 games at AAA Salt Lake City to begin the '12 season while the major league outfield struggled, it was apparent that the Angels made a mistake. After April 27th, their record stood a horrible 6-14, tied for the worst start in franchise history, and they were vastly underachieving despite lofty off-season spending on Albert Pujols and C.J. Wilson. They desperately needed a spark.

The Angels cut Abreu, called Trout up, and the kid began an assault on big league pitching that has not stopped at all. He's hitting .331/.396/.569 with a major league-leading .424 wOBA, 174 wRC+, 8.7 fWAR, and 10.3 rWAR. The Angels have gone 71-52 since Trout's promotion, a .577 winning percentage exceeded only by the Oakland Athletics, and they only sit a few games out of a playoff berth. Trout saved the season, and fans can only wonder what April might have been like if Trout was on the team from the start.

There is also Trout's defense to consider. His range and glovework are nothing short of spectacular. The catch below is arguably the play of the year, and it is one of at least five home runs that Trout has brought back over the course of the season.

Since Trout has both triumphed on offense, defense, and getting his team back into playoff contention, it is a mystery that a debate over AL MVP is still raised. Yet Jeter's aura causes confusion, and Detroit Tigers manager Jim Leyland's dismissive statements about Trout in favor of his own slugger, Miguel Cabrera, have raised questions about whether he should be MVP or not.

Veterans should not be given any extra credit for experience though. The MVP of the 2012 season is the person who made the biggest impact in 2012, not any other year. Veterans coming close to the award for several years and finally winning it makes for a good story, but the argument of "Well, Trout will have many more years to try for the award" is extremely flawed. What if he never has a season like 2012 again? Nothing in baseball is guaranteed, and injuries can quickly ravage a career. If he is not chosen as MVP now when he is eligible, maybe he only goes on to have a so-so career, and his one chance at the award would be revoked simply because of a veteran? That would itself be a separate story of disappointment.

Jeter's 2012 has been compared with his 2009, but his .324/.368/.449 triple slash with a 122 wRC+ pales in comparison to 2009's .334/.406/.465 with a 134 wRC+. Jeter finished third in AL MVP voting that year behind Minnesota Twins catcher Joe Mauer and teammate Mark Teixeira. This year, he is not even doing that well, and a candidate equal to Mauer's amazing '09 is on the scene again in Trout. It is also not ridiculous to argue that again, Jeter should finish behind a teammate since second baseman Robinson Cano has a much-higher .540 slugging percentage with a 141 wRC+. When Jeter's lackluster fielding is included, the divide becomes even greater, as Cano's Gold Glove-caliber defense has led to a 6.1 fWAR while Jeter's offensive exploits are hindered in a 3.4 fWAR.

Jeter is a sentimental favorite for AL MVP, but thankfully, emotional factor is not as influential a factor in MVP voting as cold, hard statistics (not to mention a 21-year-old kid winning both Rookie of the Year and MVP is a great story on its own). Trout has simply been a much better player, and the media has recognized his feats. Hopefully, fans of the game can only hope that they recall Trout's unbelievable season when the MVP voting begins in November.