Are Platoon Splits Making a Difference for Yankees' Offense?

Share All sharing options for: Are Platoon Splits Making a Difference for Yankees' Offense?

Last night was the kind of game the Yankees have won so often in the past, but have struggled with this season. Before putting up 10 runs on the Boston Red Sox, the Bronx Bombers had scored double-digits on only three occasions, which not only ranked near the bottom of the league, but also put the team on pace for its lowest rate since 1972. This inability to pile on runs, which heretofore had been a trademark of the Yankees' offense, has resulted in an over one-half run per game decline over last season. 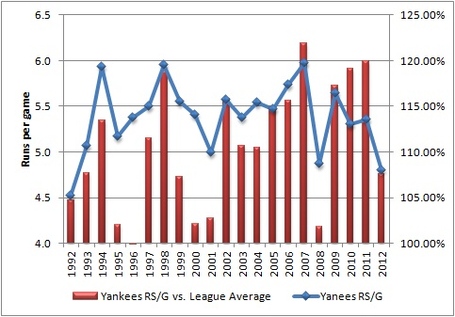 Considering the Yankees rank sixth among all major league teams in runs scored per game, not to mention first or second in several sabermetric peripherals, it's probably a little unfair to cite the offense for underperformance. However, the standard by which the Yankees are best measured is their own past performance and, as illustrated by the chart above, the lineup has not been as productive this season.

What explains the Yankees' decline in run production? Could it be evidence of age-related erosion or simply the manifestation of bad luck? Perhaps the team's historic struggles with men in scoring position over most of the first half has conspired to suppress the number of runs scored? All of these often mentioned suggestions have likely played some role, but another less examined trend may also be having a detrimental impact on the efficiency of the offense. 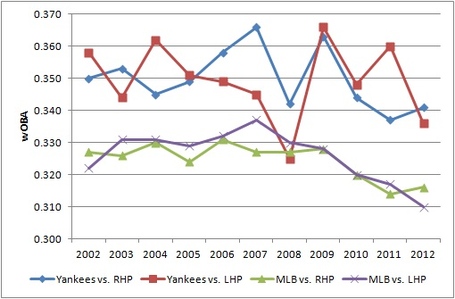 On the surface, the Yankees appear to have a well balanced offense. Entering last night's action, the Bronx Bombers ranked second in the American League against both southpaws and right handers, compiling a respective wOBA of .336 and .341. However, an examination of each individual hitter's performance tells a different story.

The average major league hitter has posted a wOBA of .311 and .316 versus left handers and right handers, respectively. These are hardly impressive rates, but only Mark Teixeira, Alex Rodriguez, and Curtis Granderson currently maintain a wOBA above them. And, if the bar is set at a still modest .330, that list is pared down further to only Teixeira and Granderson. For perspective, last season, the Yankees had five regular members of the lineup (and Jesus Montero) yield a wOBA of at least .330 against righties and lefties, so this season's polarization is a break from the norm.

Distribution of Yankees' Hitters Based on Minimum wOBA, 2002-2012 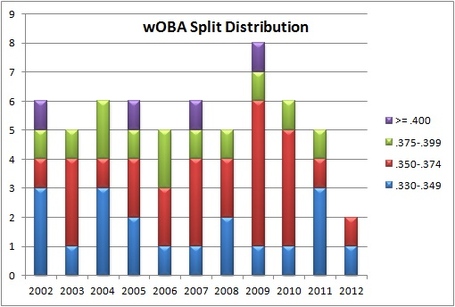 Note: Each unit represents a hitter with a wOBA at least as high as the relevant parameter against both right handers and left handers. Based on a minimum of 40 plate appearances in each split.
Source: fangraphs.com and baseball-reference.com

Considering that most of the Yankees' hitters have had success against pitchers from both sides for most of their careers, it's hard to explain why so many have developed a platoon split in 2012. More important than the reason for this trend, however, is the impact it has on run production. Could it be that the lineup's lack of balance is an underlying cause of the team's declining run production? And, if so, should the Yankees consider adjusting their lineup to cushion the blow? 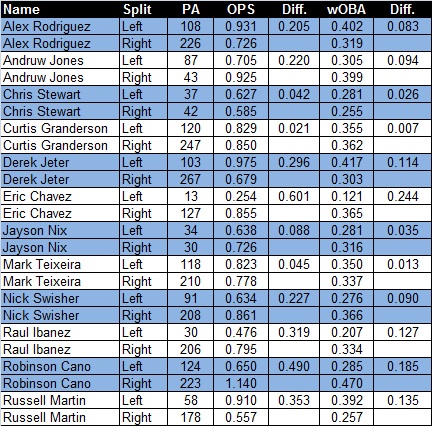 Note: Includes hitters with at least 30 PAs in each split with the exception of Eric Chavez.
Source: fangraphs.com and baseball-reference.com

By alternating Robinson Cano between the fourth and fifth slot based on who is pitching, Joe Girardi has made a small concession to the second baseman's platoon split. Ironically, because of his track record, Cano would seem to be the one hitter you'd want to leave in place, but if Girardi is willing to tinker with his best player, why not do the same with the rest of the lineup?

In addition to Cano, Nick Swisher has been another Yankees' regular who has struggled against left handers, so maybe his status in the lineup should be lowered when facing a southpaw? Meanwhile, Russell Martin, who has been horrendous against right handers, has actually posted one of the league's best wOBA against left handers, so, it might make sense to have the Yankees' catcher bat more toward the top of the lineup when one is on the mound. Similarly, when facing a right hander, the Yankees could elevate Swisher and Eric Chavez and treat Alex Rodriguez as more of a table setter? Who knows, maybe even Derek Jeter's position in the lineup versus a right hander should be fair game?

Although the recommendations above might make sense from a statistical standpoint, managing a baseball teams also involves stroking egos. As a result, some of the more dramatic suggestions are probably too impractical to implement. However, that doesn't mean Girardi should be resigned to the status quo. In the past, the usual practice of alternating between left handers and right handers has worked well because the Yankees had several hitters who could handle pitchers from either side, but if the platoon splits persist, a strategy of greater concentration might work best. All things considered, the Yankees still have enough parts to comprise a dynamic offense, but now more than ever, the onus could be on Girardi to make sure they are aligned correctly.