A Mid-Season Look Back to the Preseason Pinstripe Alley Predictions

Share All sharing options for: A Mid-Season Look Back to the Preseason Pinstripe Alley Predictions

Today's off-day officially marks the halfway point of the New York Yankees' season--81 games down, 81 games to go. All other MLB teams are at or around this mark, so now is as good a time as any to revisit the official Preseason Pinstripe Alley Predictions post. William Juliano assembled the predictions of seven Pinstripe Alley writers and gave some order to their thoughts. Although two of the prognosticators have left the blog since then, it is still worth a look to see how the staff's predictions are progressing.

WARNING: One could do all the scouting and researching possible to create predictions, but of course, due to the Sterling-Waldman Hypothesis ("YOU JUST CAN'T PREDICT BASEBALL, SUZYN!"), it is extremely difficult. Injuries happen, players break out, and the rest of the AL Central forgets that they were supposed to lay down for Detroit. It may get ugly revisiting what Pinstripe Alley foresaw before the season started, but be brave. 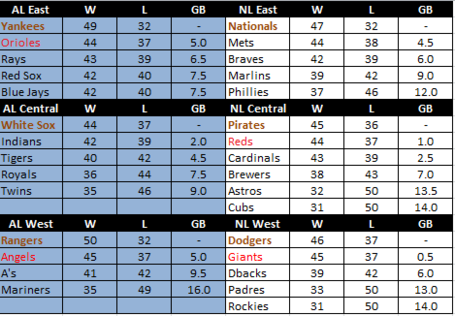 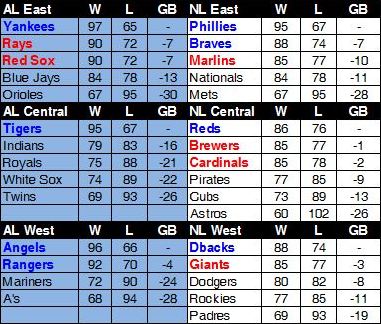 These standings represent the average won/loss totals predicted by the writers. Below are the full playoff predictions and the standings decided by the six writers who made won-loss record predictions (the recently-departed Travis only offered playoff teams, not full standings). 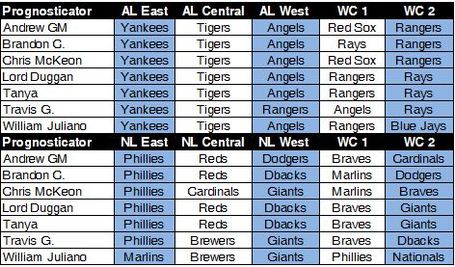 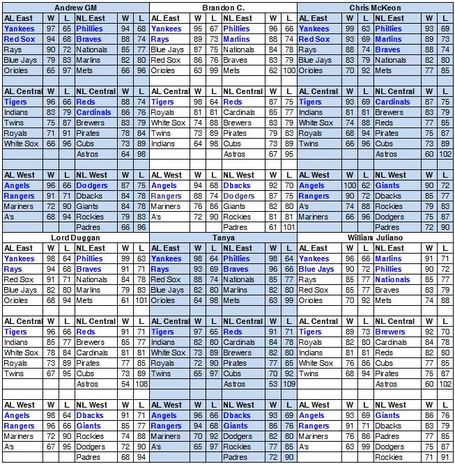 Almost everyone chose five out of the Yankees, Rays, Red Sox, Tigers, Angels, and Rangers to make the playoffs in the American League, which isn't surprising since not many writers really expected much out of the other eight teams. William had the Blue Jays in the playoffs as the second Wild Card over both the Rays and Red Sox, but right now all three of those teams, as well as the Orioles, are muddled together within 2.5 games of each other in the AL East. Neither Boston or Tampa Bay has yet pulled away from the other non-Yankee AL East teams as expected. Meanwhile, the Orioles currently find themselves with 44 wins in second place in the AL East, and only two writers even predicted that they would win 70 games. The Fightin' Showalters have certainly hung around in the division longer than anyone would have thought, and though they are probably due for some regression due to their -27 run differential (the rest of the AL East is positive in that department), they will likely finish the season with a better record than anyone anticipated.

Putting the Yankees on top in the AL East was a fairly safe bet that has thus far worked out for the writers, but the Tigers were thought to have an even more secure grasp on the AL Central. After fighting with Cleveland for most of the first half last year, the Tigers picked up the pace and romped to the AL Central crown by 15 games, so few people expected much of a change. They were a unanimous PSA pick to win the division by a similarly large margin. Instead, the Tigers have struggled to remain above .500, and they actually find themselves a couple games under that mark as baseball passes the halfway point. The Indians are three games over .500, which is around where most PSA writers felt they would finish (except Brandon, who was really down on them and tagged them with 98 losses. Whoops.). Like the Orioles, the White Sox have come out of nowhere to enter playoff contention this year, and they hold a two-game lead on the Indians right now. No writers had them even finishing above .500, and I really sunk the average by predicting a last-place, 96-loss finish. Unlike the Orioles though, the White Sox are more likely to keep up the pace since they are the only AL Central team with a positive run differential right now, and it's not even close. Rookie manager Rockin' Robin Ventura is a big early contender for AL Manager of the Year. The Twins and Royals are busy slumming around in the doldrums of the AL, so it's best not to talk about them much. Most writers predicted that to occur, although both William and Brandon had KC at or over .500. That... is probably not happening.

Over in the four-team AL West, the only surprise has been the Angels' slow start. The stumble out of the gate has made it more likely that only Travis will be correct in his AL West prediction--everyone else had the Angels winning the division. Although the Rangers are five games in front of them at the halfway mark, that lead is not at all insurmountable, especially since the Angels have a guy who could potentially pull a Fred Lynn/Ichiro and win both the Rookie of the Year and the MVP award in the same season. Mike Trout is ridiculous like that, but so is the powerful Josh Hamilton, who certainly has the home run and RBI totals that have many traditional writers wetting their pants. The winner could be determined by which team takes the AL West crown (that's how it worked in 2001 when the speedster Ichiro beat out the slugging Jason Giambi). Regardless, it was considered a toss-up choosing between those teams at the beginning of the season, but most of the PSA staff chose the Angels. Travis predicted a Rangers AL West three-peat. Although they aren't really contenders, the A's have overachieved the PSA writers' expectations by being almost perfectly mediocre. No one thought they would win even 75 games, but they are only a couple games under .500, and their run differential is near even (+5). The Mariners aren't good. No one thought they would be. How could they be good with fans like this anyway? Though I suppose we also support teams that don't have Matt Cain.

Yikes. Perhaps crazy things happen when pitchers are allowed to hit. The Marlins have disappointed so far at 39-42, but William's pick of them winning the NL East looks downright golden compared to the rest of the staff choosing the Phillies. The Phailin' Phils have been the disappointment of baseball during the first half, and they find themselves in the NL East cellar at the halfway point, 12 games behind the first-place Nationals. The Phillies are still trying to become only the third team to win six consecutive division titles, but their situation is rather bleak right now with both co-ace Roy Halladay and slugger Ryan Howard still on the DL. The Phillies' loss has been the Nationals' gain. Everyone predicted that the Nationals would finally have their first winning season, and William even predicted a Wild Card berth for them, but no one thought they'd be doing this well. They have the best record in the NL with a tremendous rotation and a young lineup. The Mets are also hanging in there despite PSA's negative predictions. Brandon, Duggan, and Tanya each even thought they would lose at least 99 games, but the Mets are only a few games behind the Nationals. The Braves have been a frustrating team to gauge thus far, as they were pegged as second-best in the NL East by most PSA writers, but they have struggled to hit a real hot streak and they lost young ace Brandon Beachy to elbow surgery. They are talented enough to still be the playoff team that all but Brandon and William thought they were though, and Atlanta's still in contention. As previously mentioned, the Marlins have disappointed despite a couple playoff predictions, but it's way too early to count them out too. Believe in Giancarlo.

In the NL Central, those Pittsburgh Pirates are back to surprising everyone again in 2012 after teasing fans last year with contention through late-July. Again, no one at PSA had them finishing above 79 wins, but the Buccos are playing their best baseball since 1992 at 45-36, the highest over .500 they have been since that fateful year. It really seems like this could be the year they snap their 19-year under-.500 streak, but they are also red hot right now and baseball can be a cruel game. The majority of PSA's writers had the second-place Reds winning the division and despite falling behind Pittsburgh last night, it still appears that Cincinnati has the inside track on the division title as the incredible Joey Votto chases another NL MVP. The defending World Series champion Cardinals, who Chris had winning the division, also lurk just 2.5 games behind the Pirates, and though Chris Carpenter is gone for the year, they will be in the hunt for the division title as well. The Brewers have faced injuries as well, and they are a little further away from the top at seven games behind, much to William and Travis's disappointment, but they could still get hot and take the lead in the division as well. The Cubs are even worse than expected. The less they are talked about, the better. Additionally, it's sad that the Astros are on pace to lose nearly 100 games and they're still beating most of the staff's putrid expectations. Duggan and Tanya even had them losing 108 and 109 games, respectively. They're going to have fun in the AL West next year.

The Dodgers were cruising along to the best record in the NL only about a week or so ago, but they've calmed down since then. LA and San Francisco seem to be on their way to another classic divisional showdown as they are within half a game of each other entering the season's second half. The Diamondbacks are not terribly far behind either, though this season has been a bit of a regression after an incredible 29-game improvement in 2011 to the division title. The NL West was the most highly-debated division among PSA writers, as three had the Diamondbacks winning it, three had the Giants winning it, and one had the Dodgers winning it. The division could really go to any of the three at this point. No one really had the Padres or Rockies doing well, although no one imagined the Rockies stinking up the joint quite as badly as they have done so far.

So that's how the Pinstripe Alley writers are doing on predictions so far. How do they compare to yours? Do you think the feel-good stories of the White Sox, Orioles, Nationals, Mets, and Pirates will keep up? Would Greg have made all the picks correctly if he had found time to make them in March?