Share All sharing options for: Make Room For Ronnier Mustelier? 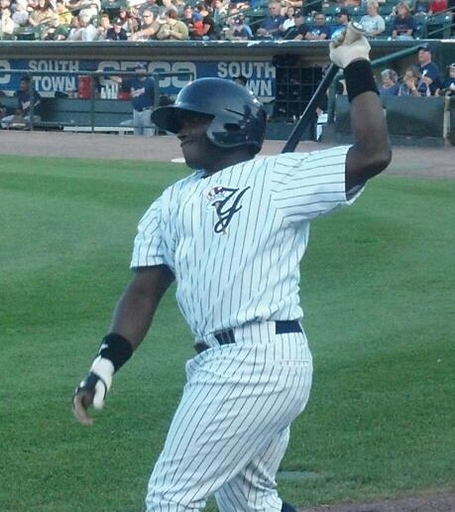 The headline suggests otherwise, but this post could easily be about Brett Gardner. Oh wow, does this team miss that guy. Absence makes the heart grow fonder and all that, but this is approaching grief territory. Right or wrong, one of the main reasons we've heard Ronnier Mustelier's name as much as we have is the revolving door of 'why is this guy playing' outfielders trying to replace Gardner. They can't.

They can't replace Gardner, but they have to try. That's really all they have been doing to this point; trying. Hard to classify cycling Raul Ibanez, Andruw Jones and Dewayne Wise out there as anything else. They're placeholders not doing enough to hold their place, so we look for someone else. We look at Mustelier.

The 27-year-old Cuban is probably too old to be a prospect, and yet, that's exactly what he is. He's a guy we think could make the team and actually have an impact if he does. Regardless of age, that's really all a prospect is. I can't presume to know a lot about him, but based on what I've seen, I can certainly try. We've put up with trying elsewhere all season, so why not now?

Hitting: No kidding, right? Would anyone be clamoring for him to get a chance if he couldn't hit? No, they wouldn't be. He'd be Ray Kruml. No one wants a Ray Kruml.

The guy can hit. Besides his age and experience outside the U.S., it's the reason he's advanced through the system so quickly. That's also kind of a problem. It's hard to get a read on just how good of a hitter he is given the constant level changes and limited playing time. You could take an educated guess and say, yes, he is a pretty good hitter, and you'd probably be right. All Mustelier has done is hit at every level, so that's a reasonably safe assumption. A .902 OPS across 500 PA in his two years in the minors gives you that leeway.

Amateur eyes suggest a solid contact hitter with decent patience, the ability to shoot the gaps and occasionally lift one out for a home run. I mean, look at the guy. He just looks like a guy who can do that. The ability to do it is there too, but it helps to look the part.

His power plays mainly to left and up the middle, but projecting to Yankee Stadium, the pull tendencies aren't necessarily a bad thing. Mustelier has enough speed to take an extra base if given the chance, so a lined double into the gap could easily be turned into triple. Then there's the short porch. We know the story with the short porch by now don't we?

Versatility: Mustelier is exactly what you want in a minor league insurance policy. His home is in the outfield, but he's played just about everywhere on the field. Given how the Yankees roster is constructed and how susceptible to injury it is, (read: they old) having a guy who can play everywhere is a great asset. Theoretically, Mustelier could play almost every day in a 'give a guy a day off' role if his bat justified keeping him in the lineup. Theoretically because it would almost certainly never happen. Merit doesn't always win out.

Versatility: Wait, what? Yes, Mustelier is capable of playing just about every position on the field. So is Bill Hall. He isn't a complete mess in the field, but a full reprieve from Ibanez shouldn't be expected either. The routes aren't great, it can take him a long time to chase down a ball in the corner or gap and his arm isn't as strong as you'd like. He doesn't possess the same .gifable qualities, just many of the same pitfalls.

None of this is terribly surprising if you think about it. Again, look at him. He has the short, stocky frame you'd expect from a corner infielder. Fly balls don't make you hold your breath, but he isn't exactly going to glide around in the outfield. It all looks a little forced. I'd liken it to Dan Uggla trying to make plays out there. He could probably do it, but it won't be pretty.

Situation: A couple things could stand in Mustelier's path to the majors; the most obvious of them being the 40-man roster. There are plenty of players more than deserving of being cut. Looking at you two, Ramiro Pena and Justin Thomas. The problem is the waiting. Barring a non-pitching injury, odds are a roster move for a position player won't be made until . Not really sure how Pena reached untouchable status, but here we are.

Assuming he makes it to the Yankees this season, which, dangerous assumption, his role isn't going to be what people hope. If the expectation is that he would step in to replace what's left of Ibanez or Wise, be preemptively disappointed. Bad or not, they're both lefties. Unless Mustelier learns to switch-hit, he doesn't fill the 'need' for perceived platoon advantage. You basically have to hang your hat on Nix getting cut. Another unlikely situation with Nix being the only short stop option right now. They're kind of stuck, so Mustelier is kind of stuck.

I sometimes think about how this situation might be different on another team. If faced with under performing veterans, would that team give Mustelier the call now? Would it have already been done? The Yankees have already tried all the current options to fill in for Gardner. Maybe it's time to try something else.