Yankees Continue to Lag in Scoring, Not Hitting, with RISP

Share All sharing options for: Yankees Continue to Lag in Scoring, Not Hitting, with RISP

Earlier in the season, the Yankees' offense was plagued by excruciatingly poor performance with runners in scoring position. More recently, however, those troubles have gradually faded away. Even before last night's 10-run outburst, the Yankees were batting .288/.383/.508 with runners in scoring position during the month of July. As a result, the Bronx Bombers now have an OPS in scoring opportunities that is 8% above the league average, and their wOBA in the split has finally crept up to the top-third of all major league teams.

Yankees' Rates of Production with RISP, by Month 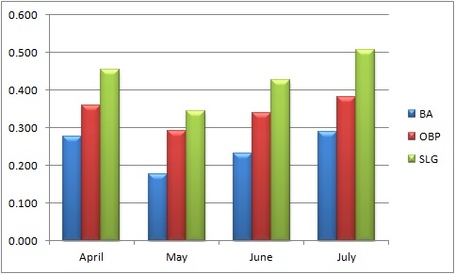 Although getting hits with runners in scoring position no longer seems to be a problem for the Yankees, actually plating runs on those hits has remained a challenge. Before Curtis Granderson's grand slam in the eighth inning of last night's game, the Yankees had failed to dent the scoreboard on five of their last seven hits in run scoring situations, which is only part of a larger trend. For the whole season, only 79% of the team's hits with men in scoring position have yielded a run, which is the second lowest rate in the majors and well below the league average. 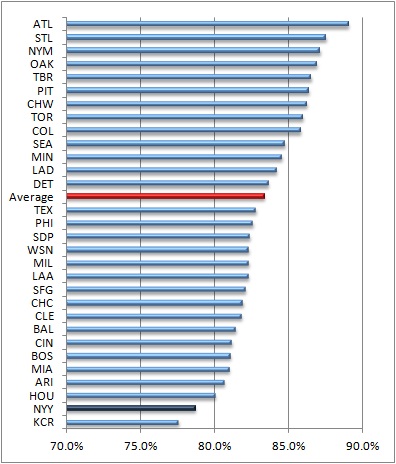 RISP hit conversion rate = Hits with RISP that score a run / all hits with RISP
Note: Data as of July 27, 2012.
Source: baseball-reference.com

Does it matter that the Yankees have been unable to make the most of their hits with runners in scoring position? Despite their relative inability to convert scoring opportunities, the team has still scored the fifth most runs per game in the majors. However, the underlying peripherals of the Yankees' offense, which ranks first with a wOBA of .343, suggest the team should be scoring even more. Recently, I had written about the potential dampening effect of the lineup's split-based tendencies, but perhaps another culprit is the team's failure to turn more of their hits with men in scoring position into runs?

Over the last 10 years, the Yankees' worst RISP conversion rate had been 83.7% in 2010, or five percentage points higher than the current figure. Also, during that period, the team's per game run production exhibited a moderate correlation (coefficient of 0.60) to its RISP hit conversion rate. Is that the smoking gun? With only 10 years included in the sample, it's hard to be definitive, but at the very least, there appears to be an anecdotal relationship between to the two elements. 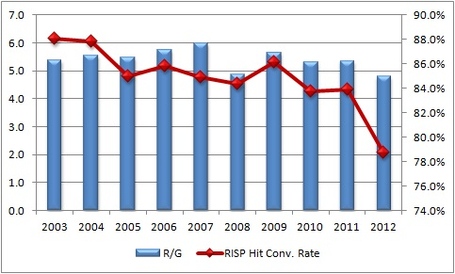 RISP hit conversion rate = Hits with RISP that score a run / all hits with RISP
Note: Data as of July 27, 2012.
Source: baseball-reference.com

Putting aside the importance, why have the Yankees scored on such a low percentage of hits with runners in scoring position? Could it be the fault of the short porch in right? With lefty run producers like Curtis Granderson, Mark Teixeira, and Robinson Cano in the middle of the lineup, perhaps their hard line drives haven't afforded the team's runners an opportunity to motor around the bases? That seems like a plausible theory, but the Yankees' conversion rate at home (82.2%) is actually better than on the road (75.7%), and only four "run-less hits" with RISP have been hit to right field at Yankee Stadium. So, the ballpark isn't to blame.

Perhaps the most likely reason for the Yankees' poor RISP hit conversion rate is also the most obvious: the team simply doesn't have much speed. Not only do the Yankees rank near the bottom of the league with only 54 stolen bases, but according to Baseball Prospectus' Base Running Runs (BRR), the Bronx Bombers haven't contributed to run production with their legs. The Yankees currently rank 27th in the majors with -7.0 BRR, which BP classifies as being somewhere between poor and horrendous. It's also worth noting that eight of the nine teams with the lowest RISP conversion rates rank in the bottom half of the BRR ranking as well. Once again, that doesn't mean base running is the main determinant of run production, but when looking for a reason why a team is underperforming its underlying peripherals, it's one factor that needs to be considered.

It's hard to put a finger on just how many runs the Yankees poor RISP hit conversion rate has cost them, but applying the team's 85.5% rate from 2002 to 2011 to this year's opportunities would equate to approximately 15 runs, or just enough to pull the Yankees within a fraction of the Rangers for the major league lead. Sprinkled over the course of the season, those runs might also have contributed to an extra win or two. Considering the advantageous position that the Yankees currently enjoy, quibbling over "missing runs" might seem driven by avarice, but, in the postseason, the team will probably need every run it can get.