Disclaimer: I had originally planned on finishing and posting this last night, but I decided to push it back due to both the late game and the Ichiro news.

One of the more disappointing results of time's passing is the fading of memory to legend. Just as very few people remain on Earth who watched Babe Ruth and Lou Gehrig play, there will eventually be few people who remember the prime of the young Mickey Mantle. It really is a shame because they got to watch one of the most dynamic athletes in not only the history of baseball, but in all of sports. The best bet for the present-day of locating a Mantle incarnate is a Jersey kid who is currently setting the baseball world on fire in Anaheim, Mike Trout. If the comparison seems unbelievable, compare Mantle's '52 to Trout's '12 and it will not appear so crazy. Still, Trout has a long way to go if he wants to be remembered as "The Mick" is in the baseball world. In his prime, Mantle was the quintessential player who could beat you with his glove, his legs, and of course his potent bat. Even after years of leg injuries, few players could run the bases like Mantle. Thus, if someone approached a baseball fan and stated that Mickey Mantle once hit for the cycle, the response would be, "..." and the fan would walk away, as people do not often chat amicably with strangers. Later however, the fan would think about it and not be surprised at all.

There was actually a point in Mantle's career when he was unpopular among Yankee fans. As a young kid in his early twenties, he played well but some felt he was not at the MVP levels of his predecessor, Joe DiMaggio, quite yet. Thus, fans became frustrated and even booed him. A terrific player getting booed? There is something to be said about "the more things change, the more they stay the same" for current Yankees who sometimes get jeered despite solid performances like Alex Rodriguez. Regardless, Mantle recovered from the early acrimony to become a New York icon after his Triple Crown-winning performance in 1956, leading all of baseball in batting average (.352), homers (52), and RBI (130). He won the World Series and an AL MVP award in '56, and he was on his way to another MVP campaign in '57. By the All-Star Break, he had 22 homers and an impressive .369/.533/.706 triple slash. The Yankees were 29 games over .500 and leading the pack in the AL, and the only team within twelve games of them came to town on July 23rd: the Chicago White Sox, who were 4.5 games behind New York. The man they called "The Commerce Comet" stole the show with a unique performance that he would never replicate.

Don Larsen, star of the '56 World Series, started the game for the Yankees, and he worked a scoreless first despite a pair of two-out walks to the recently-acquired Earl Torgeson and All-Star doubles champion Minnie Miñoso. Bob Keegan was tabbed as Chicago's starter for the day, and the one-time Yankees farmhand carried a 3.11 ERA for the season into Yankee Stadium. Against the powerful Yankees, that mark would go up by the end of his day. He got a pair of outs before Mantle stepped to the plate. Although Mantle doubled, it was not a normal play; future Hall of Fame centerfielder Larry Doby lost sight of a routine fly, and it fell for a hit. Mantle motored into second base with his 16th double of the season. Harry Simpson, a fine first baseman lost to history, came to bat after Mantle. Simpson was acquired in the previous month's seven-player trade that sent Mantle's pal Billy Martin to the Kansas City Athletics (KC was jokingly referred to as the Yankees' farm team since New York previously owned a AAA team there; Simpson would actually find himself dealt right back to KC at the trade deadline in '58, a year to the day he was dealt to the Yankees). The lefty Simpson clubbed a two-run home run over the right-center field wall to give the Yankees an early 2-0 lead.

Mantle batted again in the third inning with the score unchanged right after second baseman Gil McDougald lined into a double play. Batting lefthanded against the righthanded Keegan, he worked the count to 3-1, then received a poor pitch that did not move much and approached the center of the plate. Mantle absolutely crushed the baseball, and it went soaring deep into the New York night. Many people in attendance thought that it cleared the ten-foot tall centerfield rear bleacher wall just to the right of the scoreboard, but the ball finally came to rest in the second-to-last row, about 25 rows back. It was later measured to be approximately 465 feet. Using a public domain picture of the pre-renovated Old Yankee Stadium courtesy of the New York Public Library, here's a visual of how far Mantle's solo homer traveled: 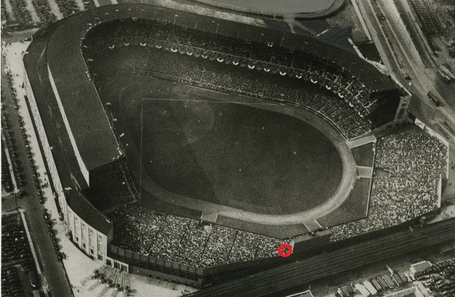 Yikes. Mantle later acknowledged, "It was one of the hardest balls I've hit lefthanded." (It should be noted that this tape-measure blast occurred several years before his lefthanded drive that struck the facade in right field and nearly went out of Yankee Stadium).

Mantle's 26th homer of the season still only counted for one run, and Larsen threatened to give the White Sox the lead. Although the once-perfect man threw 4.1 hitless innings, he had allowed six walks and a wild pitch, eventually loading the bases in the top of the fifth (even walking the pitcher, Keegan, in the process). Leadoff man Jim Rivera notched Chicago's first hit of the day with a slow dribbler back to Larsen that went for an infield single, bringing home a run. Future Hall of Fame second baseman Nellie Fox dragged a bunt single up the third base line to load the bases again, and manager Casey Stengel decided he'd had enough of Larsen instability for the day. Ironically, the man Stengel brought in to relieve the wild Larsen and escape the jam was nicknamed the "Wild Man" himself, southpaw Tommy Byrne. He did induce a pair of groundouts to get out of the inning, but another run scored in the process to cut the deficit to one.

The Yankees fought back with another run in the bottom half of the fifth on a double to left by third baseman Jerry Coleman and a single to right by shortstop Tony Kubek. However, more problems arose when Byrne's infamous control problems wreaked havoc on the Yankees' two-run lead. He got two quick outs in the top of the sixth, but then inexplicably walked each hitter at the bottom of the Chicago lineup: catcher Les Moss, light-hitting third baseman Sammy Esposito, and Walt Dropo, pinch-hitting for Keegan. The "Wild Man" then got to two-ball count on Jim Landis, pinch-hitting for Rivera, and Stengel did not even let Byrne finish the at-bat. He brought in the righthanded Art Ditmar to pitch to Rivera, but Chicago manager Al Lopez made a mid-at-bat replacement as well, pinch-hitting the lefty Ron Northey for Rivera. Of course, the end result of all these changes was a run-scoring walk anyway (Northey was also pinch-run for by Bubba Phillips--the fourth different player to appear in Chicago's leadoff spot that inning). Fox and Torgeson then torched Ditmar for a pair of RBI singles, driving home all three runners and giving the White Sox a surprising 6-4 lead.

Now batting righthanded against the new pitcher Paul LaPalme, Mantle led off the bottom of the sixth with a line drive base hit up the middle for a single. Although the most difficult play of the cycle was yet to be accomplished, Mantle was only a triple away from the Yankees' first cycle in over nine years. DiMaggio was the last player to do so for the Yankees, so it was only fitting that Mantle had to again match his predecessor to make history. Mantle moved to second on a single by Simpson, then stole third, causing an error that allowed Simpson to move to second. Unfortunately, catcher Yogi Berra fouled out (even legends stranded runners on third base with less than two outs), and right fielder Hank Bauer lined into a double play at third base. Ditmar threw a scoreless seventh, holding Chicago to a single and a walk.

Elston Howard, starting in left field today with Berra behind the plate, triple to "Death Valley" in left-center field to begin the eighth against reliever Dixie Howell, and he scored to make it a one-run game when Howell uncorked a wild pitch. Coleman walked and Lopez replaced Howell with lefty Jack Harshman. The new southpaw did not fare much better as he walked pinch-hitter Enos Slaughter, then loaded the bases with no one out when Kubek dropped down a perfect drag bunt to third base. McDougald, a patient hitter whose .407 OBP was seventh in the league a year before, worked Harshman patiently for a walk as well, scoring Coleman with the tying run. Mantle came to the plate for the fourth time that day.

No American League player had actually hit for the cycle at all since Doby did so with the Indians five years earlier, the second-longest drought in league history. Mantle sent a booming drive to the left field corner with Miñoso in hot pursuit, desperate to make the catch and prevent the Yankees from taking a comfortable lead. His leaping attempt missed the ball, and it fell safely for a hit. The ball rolled around, and Mantle moved to third base while three runs scored. Not only had Mantle successfully hit for the cycle, but gave his team a three-run advantage. Harshman got the next three hitters out to end the inning, but Yankees reliever Bob Grim worked around the team's 13th walk of the day to pitch two scoreless innings and secure the win. Mantle would never cycle again, but it was one of the finest games of his career.