Share All sharing options for: A Look at Derek Jeter’s First Pitch Fancy

Derek Jeter has gained a reputation for being a very aggressive hitter. However, the Yankee shortstop's career walk rate of 8.8% is actually slightly higher than the American League average of 8.7% over that same period. In terms of pitches per plate appearance, Jeter's career rate of 3.75 is also very close to the league average of 3.77 since 1996. He may not be as patient as Adam Dunn, but by no means does the Yankees' Captain leave the bench swinging...at least not all of the time. 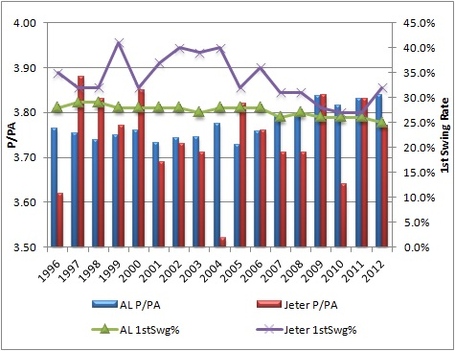 Jeter may not be a free swinger, but often during his career, he has been a first pitch swinger. Leading up to 2009, Jeter's rate of first pitch swings was meaningfully above the A.L. average in each season, and in many of those years, he ranked among the league leaders. Over the past three seasons, however, Jeter's willingness to pull the trigger on the first pitch hovered around the A.L. norm. So far in 2012, the Captain has reversed course again, as he currently maintains a first pitch swing rate seven percentage points above the league average. 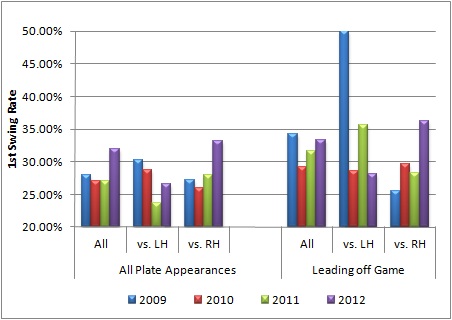 Unlike the previous three seasons, this year, Jeter has been much more likely to offer at a first pitch thrown by a right handed pitcher. Could it be that the Captain is making a concession to his recent struggles against righties (wOBA below .300 in 2010 and 2011)? For whatever reason, Jeter has swung at the first pitch in over 33% of his plate appearances versus righties this year, versus 27% of the time against southpaws. More significantly, almost 85% of the first pitches Jeter has put in play have come against right handers, and in those at bats, the Captain has batted .357 with a slugging percentage of .500, rates that are well above his normal production against right handers. 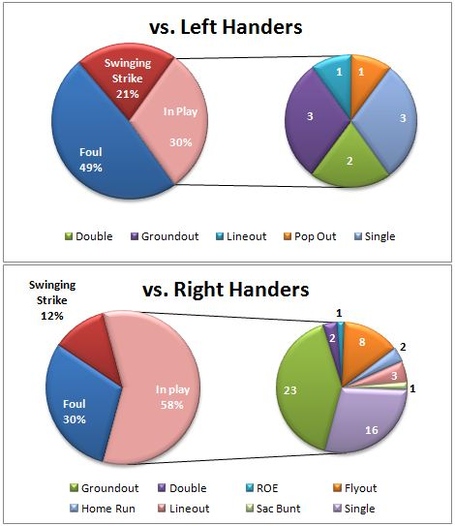 Throughout his career, Derek Jeter has enjoyed considerable success when swinging at the first pitch. With rare exception, the shortstop has regularly outperformed the league when putting the pitcher's initial offering in play. However, this year's rate of success has been more modest, which could be an indication that he is forcing the issue. If so, and pitchers begin to throw early deliveries off the plate, Jeter could find himself expanding the zone. According to PITCHf/x data, a career-high 27.5% (dating back to 2007) of Jeter's swings have been on pitches outside the strike zone, so that development may already be underway. 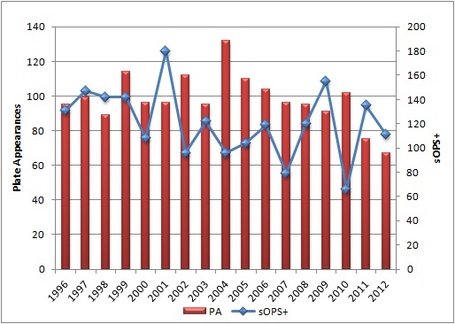 Note: sOPS+ compares a team’s performance in a split to the league average. A reading above 100 is considered above average.
Source: baseball-reference.com

In order for Derek Jeter to remain an above average offensive player, he'll need to supplement his lofty performance against lefties with at least a modest amount of success against righties. This season, Jeter has seemingly found a way to accomplish that by swinging at more first pitches. However, fewer walks from both sides of the plate have been the price he has had to pay. As long as he continues to get base hits, that tradeoff works well, but if pitchers adjust to his aggressiveness by throwing balls early in the count, the Captain will need to stay one step ahead, or, perhaps, one pitch behind.