Share All sharing options for: Closing Time: Assigning Roles in a Mariano-less Bullpen

It wasn't exactly life after Mariano Rivera, but David Robertson got his first glimpse at what it will be like to be the last line of defense in the Yankees' bullpen. And, if last night's outing qualifies as an early test, the right hander passed with flying colors. Called in to protect a four-run lead in the bottom of the ninth, Robertson mowed down the heart of the Royals' lineup, striking out the side on 15 pitches.

For 17 years, the Yankees have almost exclusively relied on Mariano Rivera to slam the door in the ninth inning, but now, Joe Girardi will have to devise a new formula. Although some have dismissively argued that all the team needs to do is replace approximately 40 innings, the challenge facing the Yankees is really much greater. Not only does Girardi now have to figure who will pitch the ninth inning on a nightly basis, but he must also redefine everyone else's role as well as find another reliable reliever (perhaps David Phelps or even Phil Hughes?) to pick up the slack created by the shuffle. 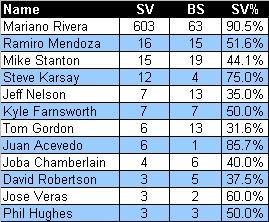 Even though Girardi has publically stated that the Yankees will use both Robertson and Rafael Soriano as Rivera’s temporary replacement, the initial tea leaves seem to suggest that most of the save opportunities will be reserved for the former. Considering Robertson's dominance, which has been punctuated by a K/9 rate of 13.7 over the past two seasons, that choice seems like an obvious one, but is it really the best way to go?

The biggest concern about using Robertson as the primary closer is that by limiting his appearances to the ninth inning, the Yankees will mitigate the value of his incredible strikeout rate. When there are men on base late in the ballgame, Robertson’s swing and miss stuff is a lethal weapon, but if confined to one inning appearances, the Yankees may not get to use it.

Interestingly, we’ve already seen such a pattern develop because of Robertson’s designation as the "eighth inning guy". Last season, before he was given a defined role, Robertson operated as a true fireman, often being called upon to clean up a mess. As a result, 47 of his 70 appearances began with a score differential of +/- two runs, giving him a game leverage score of 1.69 (a score of 1.5 or greater is considered to be high leverage, or, more colloquially, a pressure situation), which was third highest in all of baseball. This season, however, Robertson has only entered two games with runners on base and on six occasions, or half of his appearances, has been called upon despite the score differential being at least four runs. So, not surprisingly, Robertson’s game leverage score has dropped to below 1.30. Needless to say, if Girardi continues to use his best weapon in such an inefficient way, the Yankees will wind up having to fill a void above and beyond the one left behind by the loss of Rivera.

Note: gLI is the leverage at the point a pitcher enters the game. A score of 1 is considered "neutral "and 1.5 is considered "high leverage".
Source: baseball-reference.com and fangraphs.com

The alternative to Robertson as closer would be Soriano. Many Yankees’ fans will probably wince at that suggestion, but it wasn’t too long ago that he had a 45-save season in . Because he is less durable than Robertson, not to mention a less attractive option for the middle of an inning when there are men on base, Soriano’s usefulness might be maximized in the ninth inning. Remember, the Yankees need to do more than just pick the best closer to replace Rivera. Until another reliever emerges as a quality late inning arm, Girardi will need to manage to his resources wisely, so having Robertson in middle relief could wind up providing the most flexibility.

Whatever the Yankees decide, it won’t be easy to replace Rivera. In fact, the worst thing either Soriano or Robertson could do is try. With Rivera at the back end, the Yankees were playing an eight inning game, but now Girardi must manage for nine. Fortunately, it seems as if he still has the bullpen depth to navigate the late innings. Now, he just needs to figure out the best way to do it.