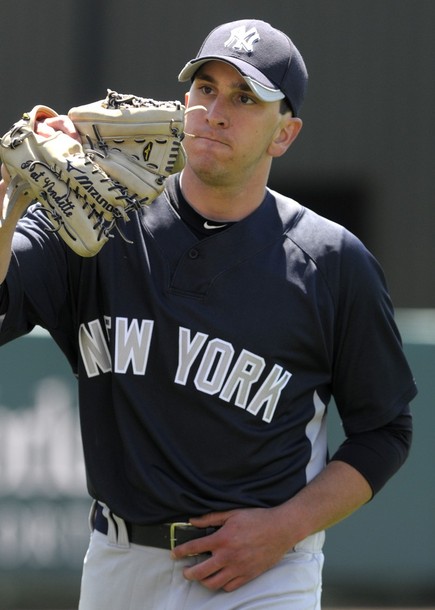 We'll start with some unfortunate injury news (which seems to be a recurring theme this year); a torn right labrum for Pat Venditte. He's currently rehabbing in Florida, and hopes to avoid surgery.

"At first I thought it was just soreness, but I found out it was a little more serious,’’ Venditte said. "We’ll have to see what happens in the next couple of weeks.’’

Venditte was off to a decent start at Triple-A (13 IP, 2.77 ERA,12/6 K/BB) before finally hitting the DL with the injury, and we all hope for his speedy recovery and successful return to the mound.

More after the jump...

Charleston RiverDogs outfielder Tyler Austin has continued his season long tear (.304, 13 HR, 42 RBI), and is working his way well into Top 100 prospect discussions. All he's done is hit since arriving with the Yankees last year, batting over .300 at all of his stops to this point. ESPN's Keith Law said he sees Austin developing into at least a two win player in the majors in his most recent chat.

More from Keith Law, as he has Mason Williams ranked at #23 in his updated Top 25 prospect list (insider required). Here is what he has to say about Williams:

He's not walking, but he's also making a ton of contact, and he's barely begun to fill out physically. There's a lot of projection involved in this ranking but he's a favorite of many scouts (and of me) because of the substantial upside here.

Williams' skill set looks great right now, he he's really coming along nicely from a developmental standpoint. The high contact is a great sign, and along with his speed, should allow him to maintain a lofty batting average as he moves through the minors. Power development is always an unknown, but Williams has a frame that should allow for at least average pop down the road.

Staying in Charleston, Dante Bichette Jr. appears to be back on track after scuffing through April (.235 average). He's now batting .297 with five doubles in May, and .366 during his past 10 games. The lack of power is troublesome, but the fact that he's snapping out of his funk and driving the ball more is a step in the right direction.

Gary Sanchez slugged a home run on Monday, his fourth of the season, and is now sitting at .284 for the year with 14 doubles. Defensively, he's already up to nine errors, and is still very much a work in progress behind the plate.

In Trenton, Graham Stoneburner continues to work his way back from a groin injury, marking the second time he's been on the DL with the ailment this season. He's off to a nice start (12.1 IP, 1.46 ERA, 10/2 K/BB), but needs to stay on the mound to continue his development, something that has been difficult for him through his young Yankee career.

Finally, I took part in the annual Minor League Ball Community Mock Draft, hosted by John Sickels over on his site. The marathon event took about five hours to complete, and overall, I was pretty happy with how things turned out. Here are my picks, and Sickels' analysis:

New York Yankees
1-30) Shane Watson, RHP, California HS
2-88) Dane Phillips, C, Oklahoma City University
2-94) Preston Beck, OF, University of Texas-Arlington
3-124) Alex Young, LHP, Illinois HS
John's Take: I like Watson at the end of the first round or early supplemental and I think he fits well here, with a good balance of upside and safety. Phillips can hit and if you believe in his glove, he's a definitely solid choice in the second round, if not sooner. Beck's power stands out in a weak college class and it wouldn't surprise me to see him go as high as the supplemental round, so I think this is a good pick, too. Young is a projectable cold-weather high school arm but might not be signable away from TCU with third-round slot money. I like his talent, though.

You can find the complete draft in the links below: