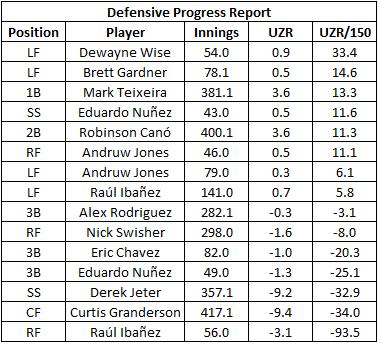 UZR is by no means a perfect statistic (it takes about three years of data to get the best projection, hence the inclusion of UZR/150 in this chart), but it certainly has worth in analyzing defensive shortcomings that are difficult for fans to observe during a season. The chart examines every Yankee who has played at least ten percent of the team's innings total so far (417.1) and brings up a few items of interest.

2) Apparently Raul Ibanez actually hasn't been as awful in left field as we were expecting. In right field, however...

3) Curtis Granderson is on pace for his worst season on defense ever. He should fix this, as his centerfield defense is league-worst.

4) Derek Jeter is not a good defensive shortstop. And yes, his sample size is much smaller than most of the players, but Eduardo Nunez's defense this year at shortstop, his natural position, has actually been above-average. He has encountered most of his problems at third base, where he only played 17 games in the minors. In case you're wondering, his outfield defense has been fine (20.3 UZR/150) in 25.1 innings.

5) Robinson Cano has been great at second base so far. So great that he actually trails only Alexi Casilla of the Twins (who has played 108.1 fewer innings) among league leaders in UZR & UZR/150. Keep it up, Bobinson.

6) Eric Chavez has not been much of a defensive replacement.