Hitless Wonders: Pirates and Athletics Turn Back the Clock to Dead Ball Era

Share All sharing options for: Hitless Wonders: Pirates and Athletics Turn Back the Clock to Dead Ball Era

Offense is down across the major leagues once again, but this year, the Oakland Athletics and Pittsburgh Pirates have taken the trend to an extreme. Not only does each team occupy the bottom of the offensive leader boards in their respective league, but both are currently performing at levels that would make a lineup from the dead ball era blush.

Historical Run Per Game Rates, by League Since 1901 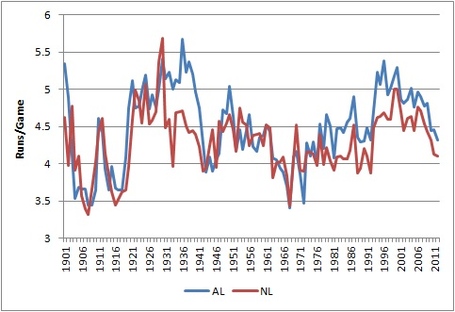 As Ivan Nova went over the Oakland Athletics' lineup before last night's game, he probably couldn't wait to take the mound. With only two batters hitting above .226 and a team average of .210, the Bash Brothers they aren't. Should the A's maintain their current output, the franchise would wind up with the lowest batting average of the modern era (since 1901) as well as one of the 25 worst offenses in the history of the American league (as measured by runs per game versus the league average). 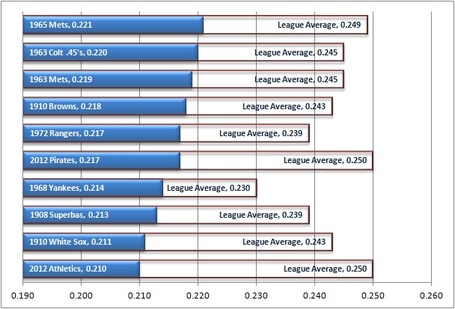 Despite its historically low levels of production, the Athletics' offense doesn't even qualify as the worst in the major leagues this season. That distinction belongs to the Pirates, who just might have the worst collection of hitters to ever play the game. In terms of runs per game, Pittsburgh's Spartan rate of 2.82 would rank as the ninth worst since 1901, but when compared to the league average, the team's run production is surpassed by all but the 1942 Phillies. Even more concerning for the Pirates is the fact that just about every peripheral supports its inability to score, including the lowest on-base percentage, second lowest wOBA, and second highest strikeout rate of all time. However, nothing puts the futility of the Pirates' offense in better perspective than its OPS+ of 69, which, to an opposing pitcher, is kind of like facing a lineup full of Billy Ripkens. 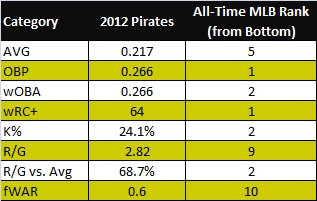 In fairness to the Athletics and Pirates, they aren't the only teams with offenses performing at historically low levels. However, they have become the symbols of an offensive recession that has gradually altered the context established by the recent era of inflated offensive totals. The throwback concept has become quite popular in baseball, and in some ways, watching the Athletics and Pirates is almost like stepping back in time. Maybe it's not quite the same style of play as in the dead ball era, but just don't be surprised if they start wearing flannel uniforms in Oakland and Pittsburgh.