Share All sharing options for: Minor League Musings And Misery 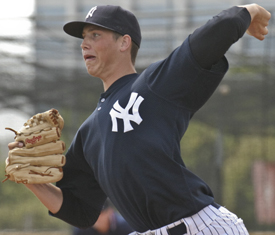 Let's take a quick lap around the minors and examine some of the more positive stuff down on the Yankee farm, before getting into all things miserable. We're just about two months into the season, and it's already been a crazy roller coaster ride for our prospects.

I can't say enough good things about Mike Newman, and the stuff he does over at Fangraphs. When it comes to the Charleston Yankess, and all things related to the South Atlantic League, he's second to none. Mike's most recent work takes a closer look at Tyler Austin's break out campaign, and offers up some interesting insight as to what the future holds for the young slugger.

I covered pitching prospect Nik Turley here back in March, and this is what I had to say about him then:

He hasn't slowed down in the early stages of '12, posting an impressive early season line for High-A Tampa (44.1 IP, 3.05 ERA, 45/15 K/BB). It's About The Money Stupid points out that Turley will be Rule V eligible after this season, so the club will have a decision to make on him very shortly. I'd like to think he can be more than a reliever in the majors, but when you pitch for the Yankees, you go where you're needed. I'll let you discuss how the organization has handled pitching prospects in the past in the comments, but please, keep it clean for the sake of our younger readers.

Let's get to the misery after the jump...

After returning stronger than ever from his last injury, Yankees top pitching prospect Manny Banuelos is returning to the minor league disabled list. The concern this time: soreness in his elbow. I can't help but think this injury may have been a residual effect of Manny altering his delivery to protect his previously injured back, but that's pure speculation on my part. Hopefully this is just mild inflammation, and he's back on the mound quickly. Also in the body of the report on Man-Ban, is news on Eduardo Nunez also hitting the DL with a sore right thumb.

Dellin Betances still hasn't gotten his act together at Triple-A, and continues to walk batters at a crazy rate (7.66 BB/9). I beg the Yankees brass to consider reworking his mechanics, even if that means sending him all the way back down to the bottom of the minor league ladder. Something needs to be done to salvage his awesome potential, or he'll suffer the same fate as former Yankee farmhand (and current Red) Andrew Brackman.

Does Cito Culver really stink this badly? His .217 average and .047 ISO are pathetic, and there is little sign of him snapping out of it. While he looks like more and more of a monumental draft bust by the day, at least we can take comfort in the fact that his double play partner (Angelo Gumbs) is continuing to show progress (.257, 2 HR, 17 RBI, 19 SB). While we all hope both of these guys make it, if the Yankees can develop one of them into a major league caliber talent, that would be a win for the organization.