Examining an Age Old Question About the Yankees' Offense

Share All sharing options for: Examining an Age Old Question About the Yankees' Offense

The Yankees' offense is old. There's no disputing that. In fact, if the unit's average current age of 32.5 is maintained, it would rank as the oldest group of hitters in franchise history, just edging out the 2005 team. Because of the team's recent struggles, several pundits have seized on the lineup's relative age as a reason for the slump, but, is the Yankees' older lineup a genuine cause for concern?

Historical Comparison of Yankees Average Age and Runs/Game, Since 1901 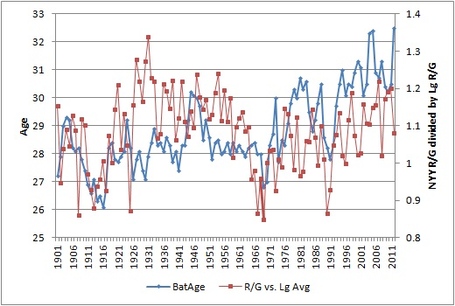 Note: BatAge is the weighted average age of offensive players only.
Source: Baseball-reference.com

As evidenced by the chart above, the Yankees offense has not exhibited a consistent relationship between run production and age. From 1901 to 2011, a comparison of weighted average batter's age and runs/game vs. the league yields a very minor correlation of 0.14, which essentially means the two variables are unrelated. In addition, on a decade-by-decade basis, the correlation coefficients vary wildly, further suggesting the lack of sustained relationship. If there is a direct connection between age and run production, it hasn't manifested for the Yankees.

Correlation Comparison Between Age and Runs/Game vs. League Average, by Decade Since 1901 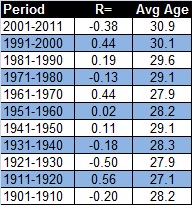 One final way of looking at the question is to determine how defined age groups have performed relative to each other. To accomplish this, each of the Yankees' 111 seasons was assigned to a quartile based on runs scored/game versus the league average, allowing for a comparison of the different segments. Perhaps the most interest observation from this analysis is that every time the Yankees' have had an offense that was younger than 27 years old, it ranked in the bottom quartile. However, when the weighted average of the lineup was one year older, it was most likely to be a top performer. The 30-31 age group also was frequently ranked in the top quartile and mirrored the 27-28 cohort across the board. In between, the 28-29 age group had the most even distribution, while the 29-30 segment overwhelmingly landed in the third quartile. Finally, in limited samples on the margins, the 31-32 and 32-33 groups finished exclusively in the third and second quartiles, respectively. The 2012 offense, which was not included in the survey, currently finds itself straddling these two segments.

Quartile Comparison of Yankees' Offense by Age Group, Since 1901 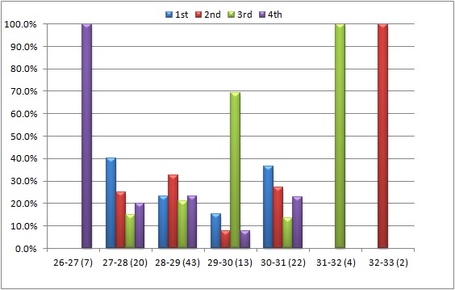 Note: Age groups defined as equal to the lower parameter and less than the higher parameter. Includes all seasons from 1901-2011, with quartiles determined by a ranking of runs scored per game vs. the league average. Number in parenthesis indicates total number of seasons for each age group.
Source: Baseball-reference.com

Considering how sluggish the Yankees' offense has looked of late, it's easy to see why so many have bought into the "too old" argument. However, based on the analysis above, the lineup's average age doesn't seem to be inherently detrimental. This is further evidenced by a quick glance at the Yankees' offensive statistics. Not only do the two oldest Yankees, Derek Jeter and Raul Ibanez, rank among the top-three in terms of OPS+, but the only two players who have performed below par happen to be younger than the team average (Mark Teixeira at age 32 and Russell Martin at age 29). If age is going to catch up to the Yankees this season, it hasn't yet taken its toll, so don't blame Father Time for the team's recent slump. He's not the one who can't get a hit with runners in scoring position.