Share All sharing options for: Just Manny Being Manny 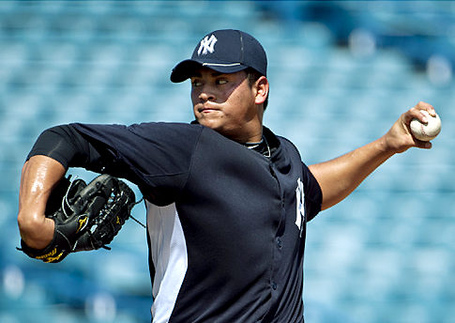 Manny Banuelos has taken the mound three times since returning from the minor league disabled list, and the results are nothing short of spectacular:

That's the product of downright nasty stuff (not female fertility drugs, like that other Manny we all know), and a renewed commitment to attacking hitters and trusting his stuff. So why is Man-Ban having so much success upon his return? Let's look at a few factors that are contributing to his success after the jump.

The most notable change in Manny this year has been the way he's attacked hitters, which is evident by the absence of walks since his return from the DL. Why is this impressive? Well, considering Manny only had one outing last season where he didn't issue a walk (August 8th, 2011) and four where he only walked a single batter (in 27 total starts in '11), this has to be considered significant progress. During his last outing on May 13th, he threw 89 pitches with 61 going for strikes, which is excellent.

Here is some video of a strikeout he recorded during his May 3rd start, displaying his ability to hit his spot up in the zone to punch out the batter:

While the sample size is small, this is a step in the right direction, and proof that progress is being made with his approach to pitching.

While we all know that Manny possesses an explosive fastball, it's his command of his secondary offerings that has also been a key to his recent success. Banuelos began mixing in a cutter this spring, giving him another weapon against right handed hitters. This pitch, along with his already strong changeup and curveball, give him a deep arsenal to work with off of his fastball. Having confidence in your secondary pitches goes hand-in-hand with the ability to throw more strikes, and Manny seems to be figuring out how to be more of a pitcher and less of a thrower.

One thing I believe is key for Manny is how much better he appears to be controlling his body on the mound, which may be directly related to the fact that he's bulked up since last season. He is currently listed at 5-11 and 200 pounds, which is a huge increase from the 155 pounds he was listed at a year ago. Even at the 180 pounds I saw him reported at toward the end of last season, a 20 pound increase over the winter is significant for a pitcher of his size. To illustrate the point I'm trying to make, let's look at some video from last April:

Manny just doesn't look in control of himself when finishing his motion. The ball explodes out of his hand for certain, but balance is one of the biggest keys to a pitcher's success, and Manny just doesn't have any consistency with his fastball in this clip.

The next clip is from Spring Training of this year (March 28th), in an at-bat against Zoilo Almonte. While the video quality is less than stellar, notice the balance Banuelos has when finishing his delivery. It is leaps and bounds ahead of what he was displaying early last year while at Double-A Trenton.

Between this grainy clip, and the example I posted from his May 3rd start, it is clear to me that Manny has adjusted well to his increased stuff and now has a better feel for his body while on the mound. This, coupled with his improved control and improved secondary offerings, have me very impressed with his progress thus far in the early part of this season.

I don't think we'll see him in the majors this season, and I think that is probably by design. I imagine Brian Cashman wants to see him dominate Triple-A hitters and build his confidence this season. That said, a strong campaign at Triple-A this year should have him poised to claim a rotation spot next spring, which is something I'm sure all of us will be excited to see.