Raul Ibanez is the most interesting designated hitter in the American League. He may not always hit home runs, but when he does, they not only travel a long way, but also make a big impact.

In the sixth inning of last night's game, Ibanez' three-run homer off Felix Hernandez just landed in the right field short porch, but most of his previous long balls had been tape measure jobs. According to Home Run Tracker, four of Ibanez' other five homers qualified as "no doubters" that would have cleared the fence in every other major league stadium. Only Josh Hamilton, with six, has more, but on a percentage basis, no one has gotten their money's worth more than Ibanez (and, perhaps, by extension, the Yankees). 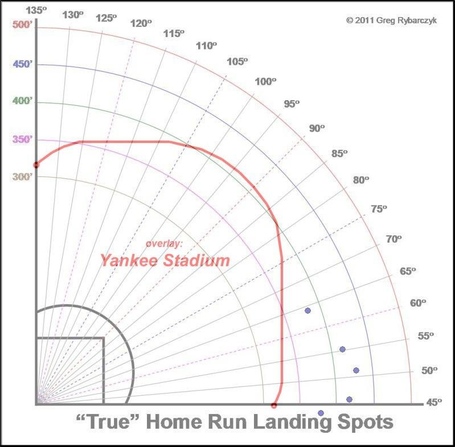 Home runs that travel deep into the stands are fun to watch, but balls that just sneak into the crowd count just the same. However, Ibanez' power display hasn't been merely aesthetic. Many of his home runs have also been monumental in terms of impact on the game, including last night's round tripper against Hernandez, which registered a WPA (win probability added) of .41, making it the second most impactful hit recorded by a Yankee in 2012. What's more, on either a homerun or hit basis, Ibanez holds three of the top-5 WPA slots, giving him the distinction of being one of the most clutch members of the lineup so far this season.

Adding to his clutch credentials, Ibanez also owns three of the top four WPA scores for an entire game and also places second in a cumulative ranking, despite playing less often than most of his teammates. Considering how poorly he hit in Spring Training, no one could have expected Ibanez to make such a meaningful early contribution, but one month into the season, the 40-year old veteran has been one of the most productive hitters in the lineup. 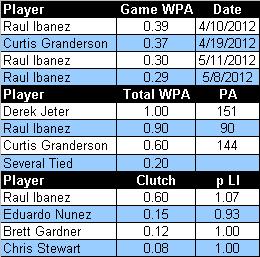 Note: measures how well a player performed in high leverage situations and is defined as (WPA/pLI) - WPA/LI
Source: Baseball-reference.com and fangraphs.com

The offseason didn't exactly go according to plan for Brian Cashman, but Ibanez' early heroics qualify as a feather in his cap. However, it's worth noting that although Ibanez was signed to primarily be a left handed DH, he has already played 15 games in the outfield. To put it mildly, when he has a glove on his hand, Ibanez becomes much less interesting (at least not in a good way), which helps explains why he has barely registered a positive WAR (0.1 in terms of both fWAR and bWAR). Can the Yankees survive with Ibanez in the outfield until Brett Gardner returns? Perhaps, but if so, they'll definitely need the lefty to keep delivering big hits. Otherwise, Cashman's feather could quickly blow away.