Share All sharing options for: The PNC Field Facelift 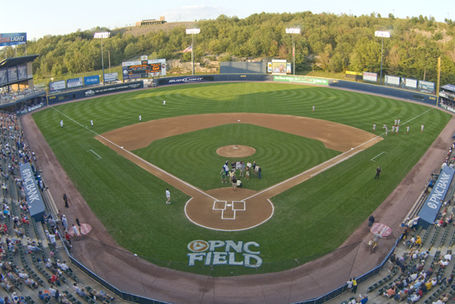 Renovations are set to begin on PNC Field, home of the Triple-A Scranton/Wilkes-Barre Yankees. A groundbreaking ceremony took place today at the stadium, and more and more details are beginning to surface about what the newly renovated stadium will have in store for fans making the trip to Northeastern Pennsylvania to watch the future Bronx Bombers.

"The 10,000-fan capacity ballpark will have something for everyone, including a newly designed lawn seating area and kids zone for families," added Matin. "We are busy planning a full slate of events at the ballpark for 2013, including a broad range of promotions, giveaways, theme nights and special incentives."

Having visited the park previously, I'm rather excited to see the changes, and think it's going to make for a great baseball experience for fans of all ages.

Pictures of the new PNC Field after the jump...

If you're unfamiliar with the history of PNC Field (formerly Lackawanna County Stadium), here is a bit of background information courtesy of Wikipedia.

The stadium opened on April 26, 1989. The artificial turf surfaced stadium was used as a multi-purpose facility. The upper level seats of the stadium are orange, and the lower level seats are green. They also have bleacher seats at the stadium. Many amateur sports competitions were held there, as well as regional band competitions, ice skating and car shows. In 2007, the Scranton/Wilkes-Barre franchise signed a Player Development Contract with the New York Yankees, ending an 18-year agreement with the Philadelphia Phillies. This new contract called for the conversion of the playing surface to natural grass. The stadium still plays host to several amateur baseball competitions throughout the season.

Stadium attendance has dipped in recent years after renewed excitement following the move to Scranton/Wilkes-Barre by the Yankees back in 2007. This Baseball America report highlights some of the details of the renovation, and lends some insight to the decline in fans in recent years.

"We are proud of our growing partnership with the New York Yankees and committed to creating a great experience for our team’s fans in Northeastern Pennsylvania," Mandalay Baseball chairman Peter Guber said in a release. "We believe that this venue will be among the finest field of dreams in professional minor league baseball and an important jewel in Mandalay’s professional sports assets and experiences."

There is reason to believe Guber. The area embraced the Yankees when they came to town in 2007. Scranton ranked fourth in the International League in average attendance (8,802) in its first year as a Yankees affiliate, a 41 percent from the previous the season. The team held strong in 2008 with a 7,147 average, good for eighth in the IL, but attendance nosedived the following three seasons, as fans were turned off by rising ticket prices, a perceived corporate management style by Mandalay and a series of structural problems at PNC Field. In 2011, the team finished second-to-last in the 14-team IL with a 4,586 average.

Here is more information on the stadium groundbreaking from MiLB.com. According to this recent report from April 27th, renovations are set to be completed in early 2013, with tentative opening date set for March 24th.

Today's work is preparing for the demolition of PNC's second desk: protective fencing is being installed, utility lines are being moved and the removing of anything not nailed down. Next week will see a Monday press conference to discuss the sale and the project, followed by the actual demolition of the second deck. The concrete foundation would be poured by June 1, with the steel infrastructure installed beginning Aug. 15. The ballpark would be ready for occupancy by March 24, 2013. By the beginning of next season the ballpark will also have a new wraparound concourse, berm and outfield group areas.

Here are some artist renditions of the renovations that are set to occur. Looks pretty nice! 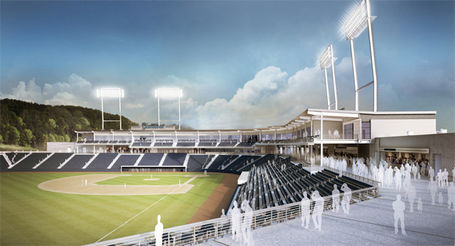 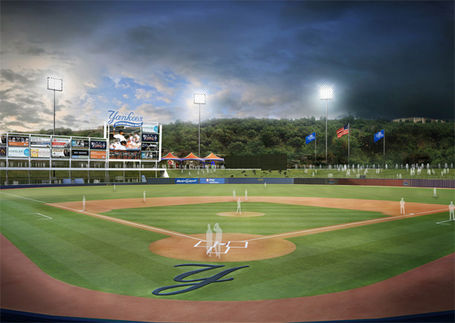 Are there any regular visitors to the stadium here? What are your thoughts, and the general thoughts of the community on the changes being made? To those who have never visited the old PNC Field, will these changes entice you to make the trip to check out the new park and take in some minor league baseball?