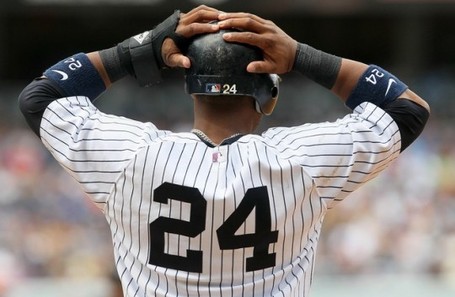 At baseball. Probably other things too. I'm pretty sure Cano is good at just about anything he does, but mainly at baseball.

Cano is going to get paid via dump truck in the very near future. Several dump trucks really. More than likely, it's going to be the Yankees who send these trucks to Cano's house. Another acceptable sentence fragment. So, since we're likely headed for a year or so of discussion about how many millions of dollars said trucks will be filled with, now seems like as good a time as any to try to get a handle on what we can expect going forward.

Watching Cano at the plate is an odd paradox. It's both thrilling and infuriating. He's an elite, veteran player that has Quad-A rookie tendencies. It's incredibly confusing when you really look into it. As good as he is, there are some glaring red flags flying as we head towards the second half of the Robinson Cano era.

A good place to start is probably with some narrative busting. What good is analysis if it can't be used to dispel things loud people love to say even though they are nowhere near the truth?

If you've listened to radio broadcasts for any length of time you've probably heard the loud noises during the 5th inning rant about Cano's progression at the plate. He's growing into one of the best hitters in the game, his plate discipline is growing, he's becoming more selective, other random puffery, etc. But like most what of the loud noises say, much of it isn't exactly true. 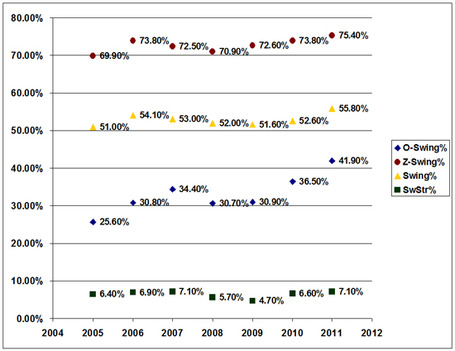 Oops. Swinging more outside the zone; swinging more inside the zone; just flat out swinging more. Combine that with a normalizing walk rate (5.6% after a 8.2% spike in 2010) and a strikeout rate steadily increasing since 2009 (9.3% to 14.1% over two seasons) and you get...plate discipline? If anything, the 2010 season would appear to be more of an anomaly than an indicator of developing patience; largely due to a significant drop in strikes thrown to him. It's probably safe to reason that even the most undisciplined hitter will end up taking a few extra walks if pitchers start actively avoiding them.

To be fair, the pitcher's unwillingness to throw Cano strikes is mostly his own doing. A lot of what makes elite hitters just that is earning that level of respect from the pitcher. If there is anything redeeming about his ever-growing tendency to fish, it's that he get incredible plate coverage and, unlike many hitters with the same tendencies, is able to produce at an elite level. 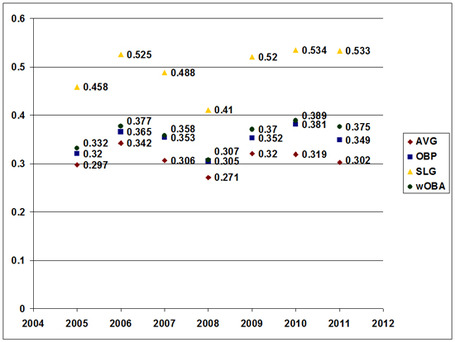 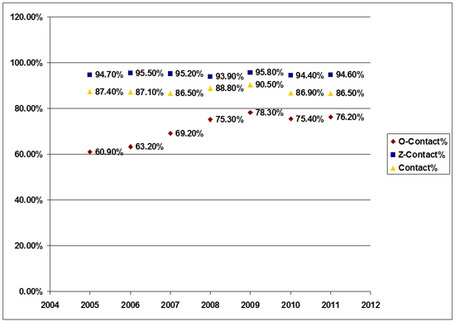 It bears mentioning that despite the strange ability to hit just about everything, it's not all sunny news. Even with the considerable gains in contact outside the zone and relatively consistent in-zone contact numbers, his overall level of contact has dipped. Not that it's overly difficult to figure out, but the probable cause is Cano's climbing number of swings. He's bound to whiff more if he's swinging more and putting himself in bad counts with bad swings. Just the way it is.

I should probably say more nice things about Cano now. That was kind of the point after all. Much like this post in many respects, Cano is a walking swinging contradiction at the plate. That's a terrible way to start a compliment, but it is what it is. Cano's odd mix of awful swing patterns and incredible results puts him in elite company these days. Maybe not elite in the traditional sense of the word; just head and shoulders above other free swingers.

A favorite pastime of mine this off-season has been laughing at Yuniesky Betancourt. More of a sick obsession really. He's just so bad and it's absolutely fascinating. Last season, while not 2009 awful, was still laughably bad. Chase rate at 40.3%, in-zone swing at 76.9% and overall swing rate at 57.4%; all career highs. Nearly identical swing stats to what Cano posted in 2011.

As I'm terrified of having Cano and Yuni near each other, even in text form, I'll try to be brief. It's not really the ability to make contact that sets Cano apart from his fellow hackers; it's what he's able to do when he makes contact. Betancourt's contact numbers were right in line with Cano's last season, but, well, you should pretty much know the rest. Cano is one of the best hitters in baseball and Yuni is, well...Yuni. It's obviously an extreme example, but in a way it's necessary because of how extreme the hacking is. There aren't many that swing away at that level, but there were certainly other options. I could have used Vladimir Guerrero, Alfonso Soriano or Miguel Olivo, but Yuni's the easiest and most obvious target. I'm nothing if not a simple being reaching for low-hanging fruit.

Time to break some charting records. (which are all made easier to read by clicking on them) 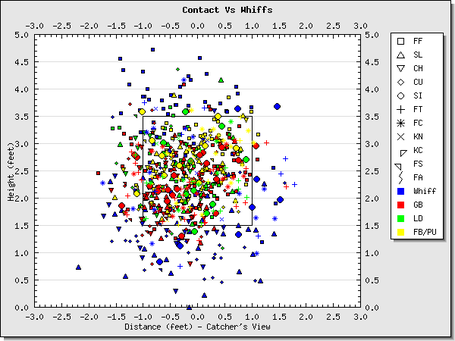 Those were painful to compile so I can only assume it hurt trying to read them. As per usual when I find that's the case, I'll try to keep it short and simple. Though it doesn't happen often, it appears the most effective way to get ahead of Cano is to start him with a slider. High strike percentage and the highest swinging strike percentage for 0-0 make it the most appealing option. But like all things, it's all about location. He's susceptible to sliders on the inside corner and low out of the zone, but if they float toward the middle of the plate...doom.

From there it gets a bit tricky. That's the trouble with quality bad ball hitters; it's tough to find ways to get them out. Throw him a fastball and there's a good chance he'll either spoil it or put it in play. Although, there's always the clear option of throwing him a fastball shoulder high and hoping he goes into A-Rod mode. Back-to-back sliders and the pitcher runs the risk of showing his hand and Cano sitting on the pitch. The road of least resistance is more off-speed pitches, again, on the corners or clearly low. If there's one thing about Cano that will never stop being annoying, it's the mile low fishing. So many whiffs on off-speed pitches way out of the zone...

Should the pitcher fall behind in the count...uh...pray? Don't throw him something in the heart of the plate? Mostly pray. Once he gets ahead, Cano actually flashes the ability to wait for his pitch. The issue is getting to that point.

Long story short, the way to pitch Cano is pretty much the same as every other hitter. Get ahead, avoid the middle of the plate, mix pitches and try to keep the hitter off balance with pitches around and outside the zone. At the same time, doing the right things doesn't always work. If ever there was a case study in that adage being true, Cano would be it.

Time might be running out, if it hasn't already, waiting for Cano to develop into an OBP machine to compliment his pure hitting ability, and the trends are a bit troubling as he ages, but I guess things don't always have to be perfect to be really, really good. As it stands, this baseball thing? Yeah, Robinson Cano is really, really good at it.