Major League Baseball finally got around to finalizing the details of its expanded playoff format, which will now feature a one-game playoff (or, perhaps more accurately, play-in) between two wild cards in each league. Although some have expressed concerns about the potential dilution of the post season, the addition of another wild card actually serves to restore integrity to the divisional races. Unfortunately, however, the haphazard manner in which the sport chose to implement this constructive change has left a negative impression, a paradox that has become a specialty of Bud Selig.

As Jayson Stark explains in great detail, this year's postseason calendar is unnecessarily compressed because the regular season schedule was created long before the new playoff format was officially approved. As a result, several teams could face a daunting travel schedule, but it's hard to get too worked up over what could wind up amounting to little more than an inconvenience. What does have some fans up in arms, however, is a more fundamental change that will have the lower seed open the division series at home.

By adopting the 2/3 format for 2012, the winner of this year's wild card playoff will host the top seed in the first two games of the LDS. This decision has raised considerable ire, even among proponents of the new system, because of the perception that it gives lesser teams a competitive advantage. But, does it? 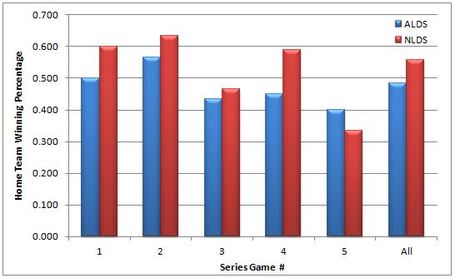 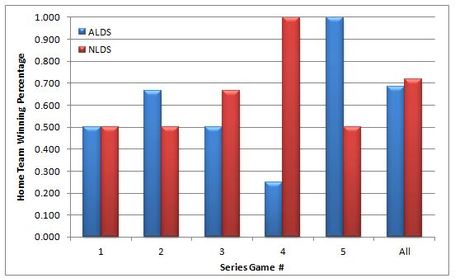 Since 1997, when the 2/2/1 format was adopted, the home team has only won 52% of all games played in the division series. In the American League, the road team has actually come out on top more often, winning 52% of the time and being at least on equal footing in all but game 2. Meanwhile, in the three seasons when the 2/3 format was used, the home team won 70% of the time, and in the first two games, the road team reduced that advantage to only 54%. Although the small samples make this data mostly anecdotal, it does dispel the notion that starting the first two games of a five game series on the road is an inherent disadvantage.

Putting aside the historical data, the logistics of the new format might also make the 2/3 scheduling beneficial to the higher seed, at least in the wild card/top division winner pairing. Not only might the lack of rest place the wild cards at a disadvantage early in the series, but the likelihood of having to use ace starters in the one-game playoff could further serve as an early handicap. As a result, the wild card is likely to wind up playing its home games in a compromised state, lessening any advantage it might otherwise enjoy. So, aside from the financial benefit of being guaranteed two home games, the wild card playoff winner really doesn't seem to be gaining anything by starting the LDS at home.

Having two wild cards isn't a perfect system. There are many valid reasons to disapprove of the format, but concern about the 2/3 schedule shouldn't be one, especially if it is intended to be only a stop gap measure. Admittedly, baseball could have waited until 2013 to implement the new system, but the potential benefits should mitigate any inconvenience...at least until one of the top playoff seeds loses the first two games on the road.