Should Dellin Betances Be the Yankees' 25th Man?

Share All sharing options for: Should Dellin Betances Be the Yankees' 25th Man?

There isn't much suspense in Yankees' camp this season. Unlike last year, when several jobs were up for grabs, the Opening Day roster is pretty much set in stone. Even the backup roles are already taken, so barring an injury or trade, Joe Girardi and Brian Cashman shouldn't have many decisions to make.

As presently constituted, the Yankees have 13 positions players and 11 pitchers who are all but guaranteed a spot on the team. In other words, only one opening remains. Earlier in camp, there was speculation that the last spot would be given to a position player, but injuries to Russell Branyan and Austine Romine have made that unlikely. Veteran utility man Bill Hall and 22-year old minor league Zolio Almonte have also been mentioned as possible candidates, but both players seem somewhat redundant (although, if the Yankees do need outfield depth at some point, Almonte has probably moved closer to the front line). So, the final slot on the roster seems ticketed to a pitcher, but which one? 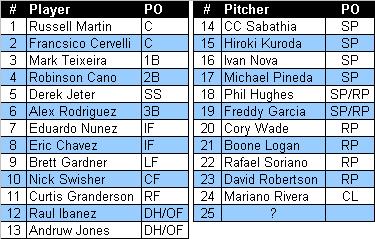 One popular theory has the Yankees' leaning toward carrying a second lefty to complement Boone Logan, with the prime candidates being Rule V selection Cesar Cabral and journeyman Clay Rapada. However, Girardi has never been preoccupied with having a second lefty, and neither candidate has much of track record to merit serious consideration. So, unless they are able to really open eyes in camp, the last spot on the roster will probably go to another right hander. So far this spring, David Phelps, D.J. Mitchell and Adam Warren have all been impressive, and conventional wisdom suggests one of that trio will be chosen to fill the final void. However, if the Yankees want to do more than just fill out the backend of the bullpen, the best choice would be Dellin Betances.

The consensus is Betances and fellow blue chip prospect Manny Banuelos have no chance to make the major league roster because the Yankees want to give both prized prospects more development time in the minors. For the 21-year old Banuelos, that approach makes perfect sense, but Betances, who will turn 24 later this month, isn't getting any younger. Sooner than later, the 6' 8" right hander will need to take the next step, so what better time than now?

The retching sound you hear is from Yankees fans who, having lived through the Joba Chamberlain saga, can't bear thought of having another promising young starter converted into a reliever. However, even if Betances were to spend the entire year in middle relief, the Yankees wouldn't have to abandon thoughts of him as a starter. A gradual easement into the starting rotation has worked for pitchers like Johan Santana, who appeared in over 75 games as a reliever before becoming a permanent starter, so, unless the Yankees think his development is still behind the curve, a similar approach could work for Betances.

If he made the team out of camp, the most likely role for the right hander would be in long relief, similar to the way Hector Noesi was used last season. If utilized in that manner, Betances could make a meaningful contribution, but his potential to improve the team isn't the main reason he should be promoted. Instead (and if for no other reason), the Yankees' motivation should be to maximize Betances' exposure to Mariano Rivera, an opportunity that isn't guaranteed beyond this season. At first blush, turning a roster spot into an apprenticeship seems like a wasteful luxury, but there is a serendipitous precedent. In 1976, the Yankees had a young left hander named Ron Guidry who spent a good part of the season in the bullpen sitting at the knee of Sparky Lyle. Although seldom used, Guidry used his time with Lyle to learn a new pitch, which eventually developed into the devastating slider that became his hallmark.

There's no guarantee that Mariano Rivera will have the same impact on Betances, but if the Yankees really do envision him being an important part of their future, it couldn't hurt to try. Even if he doesn't come away with a new pitch, the lessons learned from Rivera could prove invaluable in what ever future role Betances fulfills. After all, baseball is about passing the baton, so why not use the last spot on the roster to facilitate the hand off?

If Betances doesn't take to the bullpen, the Yankees could send him back to the minors and have another pitcher serve as a stop gap until Joba Chamberlain returns from the DL. However, if he performs well in the role, it could open up the opportunity to trade Freddy Garcia for what ever pressing need the team might have at the time. More importantly, the Yankees will have been given a glimpse into the future, which seems a beneficial tradeoff for sacrificing a rarely used position player or relief specialist. If Betances really is as talented as so many prospect watchers seem to think, the Yankees' decision regarding the 25th man really shouldn't be any more difficult than the other 24.