Frank started a nice little discussion about Yankees pitching prospect Dellin Betances last month, and after reviewing some of the recent scouting reports on him, I wanted to dig a little deeper to get to the potential root of his control issues.

There are three things that worry me about Dellin Betances' future as a starting pitcher, and we'll analyze each after the jump.

I started doing a little digging around for more detailed opinions and video of Betances from this past season. Control has always been his bugaboo, but what causes his bouts of wildness?

Betances collapses his back leg

We'll start with this outstanding analysis by Nathaniel Stoltz:

Because he’s collapsing his back leg and throwing straight over the top, Betances is not only costing himself some height leverage, but he’s also dramatically compromising his ability to get downward plane. Between the back-leg collapse and high arm slot, after all, his release is basically uphill, which is the exact opposite of where you want a tall pitcher to be throwing. The results of this problem were quite dramatic in his debut:


Think about that for a moment. If you're trying to get on top of the ball and get it to finish low in the strike zone, you need to drive with your back leg and finish with a downward motion to the plate. By collapsing his back leg, Betances is giving up that back leg drive and finish, thus keeping his pitches up in the zone. This pitch location chart drives the point home: 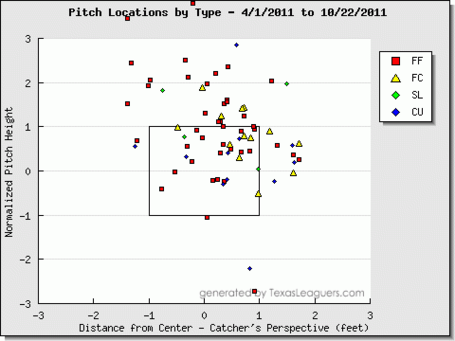 Basically, it’s physically quite difficult for Betances to throw the ball down in the strike zone. Part of the problem we see in this small sample is just him overthrowing some due to the high emotions of a big league debut (and subsequent first start), but part of it is very real and speaks to a significant problem with the righthander going forward.


To get a better idea of this, let's take a look at some video of Betances, and new Yankees pitcher Michael Pineda, to compare their finishes:

The video on Pineda is from early 2010, but best illustrates how well he finishes his delivery. Betances gives up his back leg drive before actually releasing the ball, as you can see right around the 10 second mark of his video clip.

Correcting this flaw may lead to more consistent results with all of his pitches, and keep the ball down in the zone more frequently.

Betances has lag in his delivery

The guys over at Bullpen Banter noted delivery lag in their recent report on Betances, something I wanted to see for myself. While browsing individual at-bats, I came across this example pretty early on. To get the full effect, focus only on the delivery, and ignore the ball. You should get a better idea of what I'm talking about.

The first time I watched this clip, I noticed significant lag following the pitch at the 1:27 mark. I wanted to see if I noticed a difference with the next pitch, and it soon became obvious Betances was bringing the heater as I watched him whip through his delivery. The hitter may have also noticed this, since he deposited the pitch over the right-center wall, which also makes me wonder if the lag is tipping Betances pitches.

A lag in the delivery leads to inconsistent release points. Repeating your delivery gets tricky when working with different arm speeds, and while it comes free and easy, the end result is not usually where Betances or his catcher wants the ball to be.

Betances has a lot of moving parts

This one is pretty self-explanatory. There is a lot going on with a 6-foot-8 pitcher, and his frame needs to be in sync in order to achieve desired results. In a way, this is a combination of the first two points made, but needs to be stressed as a separate final point. CC Sabathia and Michael Pineda are both tall pitchers who have good mechanics, and are able to consistently pound the zone with strikes. This isn't by accident, it's due to their sound pitching mechanics and repeatable deliveries.

Betances has many questions surrounding his back leg, release point, and stiff manner in which he lands on his front foot to complete his delivery. His collapsing back leg and stiff landing leads me to concerns over his extension to the plate, and whether these factors will lead to future injury concerns. Remember, Betances already underwent Tommy John surgery in 2009, so additional arm troubles are a future concern.

Dellin Betances will be 24 years old when the season begins, and while the talent is there, how much longer will he be considered a top prospect if the control issues continue to hinder him in 2012? Scouts talk about Betances high ceiling, and the frontline potential he possesses, and rightfully so. All the tools are there for him to be a dominant major league starter. If he's able to iron things out, he could reach his ceiling. But can he?

Manny Banuelos has passed him in the eyes of the scouting community, and is likely to get a look in the rotation before Betances. Banuelos is also three years younger, and will be given a longer leash when it comes to figuring out his own struggles with control.

With everyone and their mother speculating about the retirement of Mariano Rivera, one has to wonder if a move to the bullpen lies ahead for Betances. His power arsenal would certainly play well in relief, but placing him in the pen seems like such a waste of his immense talent. Ultimately, it may be what is best for the Yankees, and also where his only opportunity may lie.

My gut tells me the bullpen is where he ends up. I'm certainly not giving up on him, but I'm concerned. I hope I'm wrong, and he gets things figured out as a starter. For now, we're left to wonder if this enigma will ever pan out and be the star Yankee fans hoped he would already be.