End to the Riddle: A Postmortem on A.J. Burnett’s Yankee Career

Share All sharing options for: End to the Riddle: A Postmortem on A.J. Burnett’s Yankee Career

The Yankees had many reasons for trading A.J. Burnett, but the deal also came in the nick of time for the right hander, assuming he is sensitive about his legacy with the team. After a solid debut campaign in 2009, Burnett's subsequent futility was of historic proportions, making him one of the least effective pitchers in franchise history.

Among all qualified pitchers who have taken the mound for the Yankees, Burnett's 2010 and 2011 seasons rank third and sixth worst (out of 396), respectively, in terms of ERA. Using ERA+ is a little more generous to the righty, but even on that basis, his last two seasons each rank among the bottom-25 in team history. That's not exactly what the Yankees had in mind when they inked Burnett to a five-year deal. 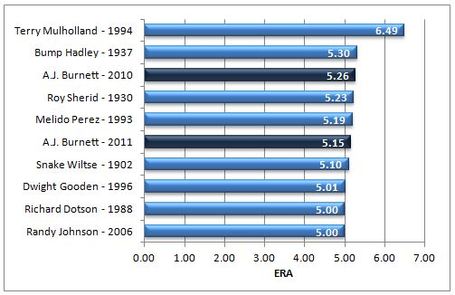 Note: Includes only pitchers who qualified for the ERA title.
Source: baseball-reference.com

Only an eternal optimist could have expected a turnaround for Burnett in 2012, so the Yankees' decision to cut bait spares them another season of the right hander’s epic struggles. What’s more, it also saves Burnett from further soiling his Yankee career by adding another stinker on top of his last two. As it stands, his 4.79 ERA with the Yankees ranks fourth worst among all hurlers who have thrown at least 400 innings for the Bronx Bombers. Had the trend of recent poor performance continued over the life of his contract, Burnett might have claimed the ignominious throne that currently belongs to Sterling Hitchcock.

Perhaps the most amazing thing about Burnett is in spite of his historically poor cumulative record as a Yankee, he still wound up being a key contributor to a championship in 2009. Of course, in typical Burnett style, even that year wasn’t without its ups and downs. Despite an overall strong season with an ERA+ of 114, he still managed 10 games with a game score lower than 45, and, during the postseason, alternated between good and bad starts. At his best, Burnett was a Dr. Jekyll and Mr. Hyde pitcher, and over the last two years, the doctor didn't make many house calls.

Burnett’s Yankees career was defined by so many contradictions. He had more "stuff" than just about every other pitcher, but the results were never commensurate. Whereas he had thrived against the beasts of the A.L. East with the Blue Jays, his three-year record against the Red Sox while in pinstripes was an abysmal 1-4 with a 7.29 ERA in 10 starts. Beat writers covering the team would always report on how hard Burnett worked in between starts, but then, when things went awry during the game, he appeared to give up easily. According to most accounts, he was a well-liked member of the clubhouse, but that didn’t stop him from showing up his teammates and manager on the field. And, while he was perhaps best known for the merriment associated with throwing pies after a walk off win, he wasn’t immune to expressing his anger by punching a wall following a tough outing. In three years, the Yankees could never quite get to the bottom of the Burnett riddle. Now, it’s the Pirates burden.