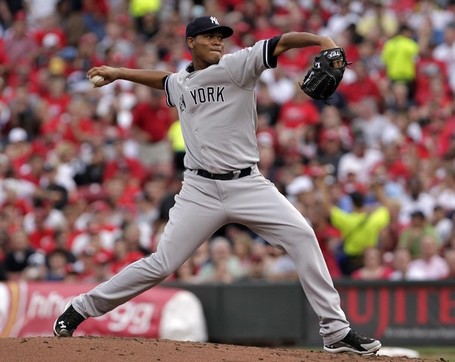 I never really have a set plan when I choose to write about something. It's mainly a case of lobbing a whole lot of vague ideas against the proverbial wall and moving ahead as I find more and more ideas to progress the piece sticking to the wall. It isn't a perfect process by any stretch, but writing never is.

But you don't care about my musings on writing (do you?), you care about Ivan Nova.

When I started thinking about writing a piece on Nova, my first thought was to simply look at one game and breakdown everything he did so, so well. As I thought about it, the one game that sprung to mind was probably the same one most people would think of.

Take a minute. Try to remember one game that stands out for Nova the way the complete game gems Sabathia and Colon pitched against the Rays and A's do.

Got it? If what came to mind was his early May performance against the Rangers then we're pretty much on the same wavelength. After a rough first six starts (ERA over 5, 1.13 K/BB, 1.61 WHIP), Nova spun 7.1 innings of two-hit ball with one "walk" before being hooked when Mark Teixeira booted an inning-ending double play ball.

I was basically ready to get rolling when I decided to check the WPA from that start against the best starts from the rest of the rotation from last season. Not only did it not stack up against Sabathia's game against the Rays or several of Colon's starts, it wasn't even Nova's best start. Well, not by WPA at least.

Perusing through game logs on Fangraphs to waste my afternoon, because spreadsheets are way better than doing outside stuff, led me to a game I had almost completely forgotten about. In late June against the Cincinnati Reds, Nova put together the game of his young career. The idea for my post was still valid, it just took a slight detour.

Obviously the concept of "best" is completely subjective, but damn, this was the best.

Perhaps it was the 4-0 cushion the Yankees gave him before he even took the mound, but Nova wasn't exactly sharp from the get go. Two straight line drive singles had the Reds poised to get back into the game. Then Nova did what Nova does. Joey Votto grounded into a double play that scored a run and that would be just about it. From there it was a struggle for the Reds to even get the ball out of the infield, managing just two ground ball singles (and an error from a spiked pitch on a strikeout) over the remaining 7.1 innings Nova pitched.

Yeah, that was pretty impressive. But what made him so successful? To the thoroughly unimpressive (in their construction) graphs.

It really is a case of "keep it simple, stupid." Variety is necessary for success, and Nova mixed his pitches to near perfection. 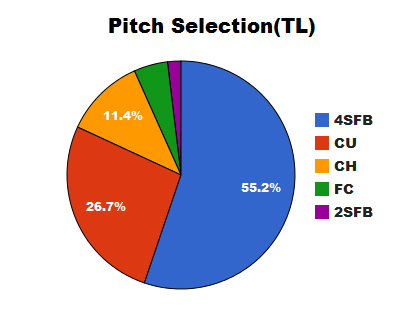 One minor detail; TexasLeaguers recorded the pitch selection differently than Fangraphs. Best guess is it's a case of difficulty differentiating between similar pitches (slider or curve/two-seamer, etc.). In the interest of fairness, here's how Fangraphs charted his selection. 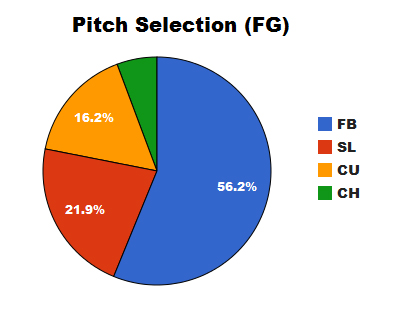 Either way, it ends up in the same place. Nova primarily worked off his fastball early in the count (71.4% first pitch) to help set up his secondary pitches. You know, like good pitchers do. Varying his pitches kept batters off balance all game and had them fishing when behind in the count. All seven strikeouts, including three against poor Drew Stubbs, were on pitches other than a fastball; five by "curve" and one by change and cutter.

Poor, poor Stubbs, though I'm sure he's used to it by now.

Attention Manny Banuelos: If you're reading this, do this. Do what Nova did in this game. This is how to pitch effectively.

It's no secret that Nova throws a heavy fastball. Not heavy in the sense that he's going to burn it by hitters consistently, but heavy in that it takes just about all a hitter has to keep the ball off the ground. When a pitcher can throw a bowling ball like that, it only makes sense to attack. It A) keeps the pitch count down as opposed to trying to strike everyone out, B) allows the pitcher to play with secondary pitches around or outside the zone (work from ahead) and C) even when the batter gets a hit, it normally isn't going very far. 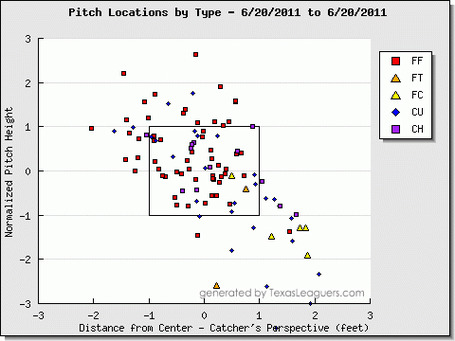 A few fastballs strayed high, but you're going to have that. For the most part, it was attack, attack, attack. No fooling around with trying to peck corners; go right after the hitters with your best pitch to, as previously indicated, set up secondary stuff, or dare them to put it in play.

The latter was certainly the preferred method. 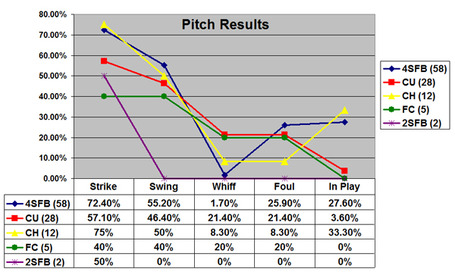 Fastballs for strikes despite next to zero missed bats, trying to induce ground balls or set up putaway pitches later in the at-bat. This is when Nova is at his best. He's ground ball pitcher, so why try to be something he's not? The options for hitters are very limited when he's using that heavy fastball to maximum effect. 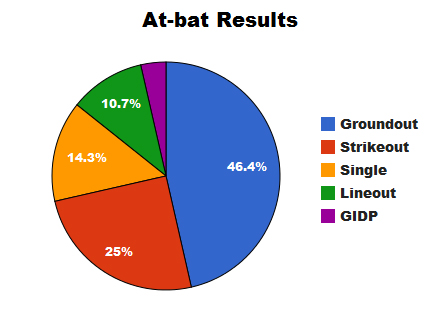 Spin the wheel: groundout, lineout, strikeout or single. Your less than ideal choice. If we care to expand on it, two of the four singles came on ground balls as well as the GIDP (thanks...), which brings the total of bowling ball grounders to 57.2%. Almost five points higher than his season average. (52.7%)

The strikeouts? Just well selected pitches after the perfect amount of set up. A new wrinkle of sorts to his game, having eclipsed four strikeouts just twice before this start.

We're really traveling down the Captain Obvious road now, but it's a salient point. So much of being able to attack the zone and consistently throw strikes comes from being able to replicate the same motion over and over. Easier said than done with mechanics being the finicky beast they are, making it all the more impressive that Nova was able to rein them in as quickly as he did. 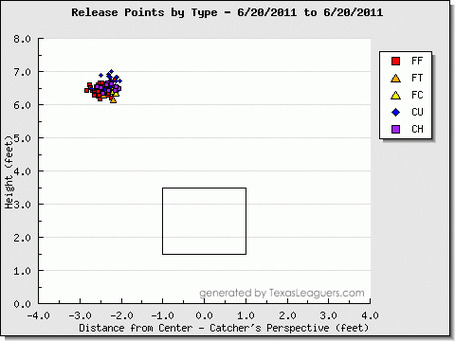 Again, a few bound to happen strays, but that's a quality grouping. A consistent release point does a couple things for a pitcher; it helps them locate their pitches better (thanks...) and it will keep the hitter guessing. If the pitcher is releasing everything from the same window, it's much harder for the batter to pick up what's being thrown, as opposed to dropping down to try to add horizontal movement on a slider for example. Even put up along side Nova's start against Texas, in just over a month he showed legitimate progress in keeping his pitches together.

Compare that to the polar opposite of consistent mechanics and release points...

Mother of God, A.J...are you even trying?

It was as close to perfect as you're going to see on a nightly basis. It was complete, it was thorough, it had rough patches to overcome, it showed improvement and it was dominant. It was everything you would want to see from a young pitcher.

And Nova was just getting started. At least he would be after he returned from being sent to the minors for whatever reason. (which happened two starts later)

Let's just try to forget that ever happened, shall we?