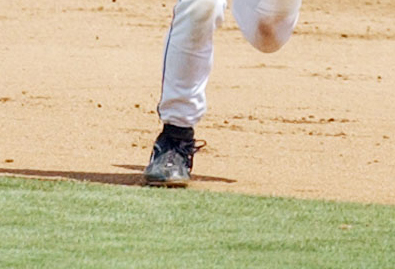 This is an ankle. More specifically, this is David Adams' ankle (and part of his knee).

Why is said ankle pictured? Well, besides the fact that the rest of the picture would likely bring forth boos and hisses from our resident ACC heads, it's because Mr. Adams' ankle holds a bit of an odd place in recent Yankees history. I say odd mainly because Adams isn't exactly the most well known or one of the top players in the system, yet he may have altered the current state of the Yankees without ever stepping on the field anywhere near the big club in the Bronx.

Before the conjectured narrative gets sent into overdrive, some background...

To say Adams was a hot prospect coming out of high school in 2005 is probably a understatement. Baseball America ranked him the #2 third baseman in the country and #19 prospect overall, four spots ahead of Andrew McCutchen, only one spot behind Buster Posey and over 50 ahead of DeSean Jackson.

Adams was drafted in the 21st round out of high school by the Detroit Tigers, but decided to take his talents up the east coast to the University of Virginia instead of signing. He showed a little bit of everything during his time with the Cavs. (my penance to the ACC folks) He hit for average, showed an ability to get on base, decent power and speed and a strange propensity for being hit by pitches.

His sophomore season he led the Cavs in average and finished second on the team in OBP, slugging and total bases. Not bad for a middle infielder.

Then came the injury.

The injury is the really the only way to describe it. It wasn't just an injury, it was the injury. One that would create waves for seasons to come.

That last sentence was high school level and incredibly lame...moving on.

With the trade deadline approaching and the pitching staff taking a nosedive, in their pursuit of the mythical #2 starter, the Yankees set their sights on the Mariners' Cliff Lee. The deal was all but done. Cliff Lee and his family was packed and ready to move to New York City and the trio of Jesus Montero, Zach McAllister and David Adams were headed west. Well, that is until they decided to do those pesky medicals screenings.

At the time of the proposed deal, Adams was on the shelf with an ankle injury he suffered in late May. Even with the lingering injury, at the time described as a sprain, the Mariners were ready to go through with the deal. When the x-rays came back...doom.

No deal. Adams' sprain was actually a fracture. The Yankees tried to save the deal but the Mariners moved on. Cliff Lee to Texas.

If I haven't sufficiently bored you to death with stuff you already know, good news, there was actually a point to all of the build up.

You may not know who Edward Lorenz is, but you may be familiar his theory on the unpredictability of weather known as the butterfly effect. In essence, Lorenz, an assistant professor in MIT's meteorology department during the 1960's, posed the question of whether a butterfly flapping its wings in Brazil could change conditions in the atmosphere in such a way that a tornado would touch down in Texas.

The short answer: no. The (relatively) more complex answer: no, but maybe yes. We can't say with any manner of certainty because of the incredible number of variables involved.

Why is this relevant for any reason other than to prove I know how to work Google Scholar? Consider David Adams as the butterfly in Lorenz's theory and think about all the events that happened after the failed trade, including the recent Michael Pineda-Jesus Montero swap. Could what appeared to be a minor injury to a middle of the pack prospect have been the catalyst that, among other things, helped land Pineda?

With Lee out of the picture, the Yankees cobbled together the rotation for the rest of the season with hopes, prayers and Ivan Nova. Right away, does Nova even get a chance to audition with the team if the trade goes through? With CC, Lee, Pettitte, Burnett, Hughes and Vazquez's dead armed veteran presence already in place, it would seem unlikely we see Nova until spring training save for a meaningless spot start when rosters expanded.

But of course, Lee was also set to become the prize free agent that coming winter. We know the details and I'm sick of talking about Cliff Lee, so I'll try to be brief. If Adams' ankle holds up and the trade goes through, it would stand to reason the odds of the Yankees being able to re-sign him would have been much better. Lee signed with the Phillies; Cashman pouted for awhile then picked Freddy Garcia and Bartolo Colon off the scrap heap, again hoping for the best. As luck would have it, they really did get the best out of a situation that was little more than a swan dive of a high cliff with a small pond below.

The pitching held up well enough through 2011, but going forward, hopes and dreams probably weren't going to be enough. That would bring us to where we are now and how we've come full circle. Steep prices for the trendy names on the market left the Yankees adrift in a sea of mediocre outlooks, still hunting for their white whale.

Enter Michael Pineda from out of nowhere.

Since the butterfly effect is part of the larger picture of the chaos theory, it only makes sense to completely break from current line of narrative to go off on a tangent and visit one of the other teams affected by Adams' wing flap. With Adams in the system, do the Mariners stay the course with Dustin Ackley at second base? The team had just moved Ackley to second at the start of the 2010 season after he had played just about everywhere except second at UNC, so would the move have stuck? A serious look ahead, but no injury means no Justin Smoak for the Mariners. Do they make a stronger run at Prince Fielder with no one to block him at first base?

It's obviously impossible to prove everything, or anything really, that happened after Adams' injury caused the chain of events that followed; and that's kind of the point. The beauty of the butterfly effect is that there's no way of knowing or quantifying just how much of an effect a simple flap of the wings can have on the world. Could be nothing, could change things in such a way that the apocalypse is triggered.

It's just something interesting to think about. How a guy with less than 40 games played in AA could both save Jesus and cast him off. How he may have changed things in such a way that brought the Yankees not just one young stud pitcher in Pineda, but possibly another in Nova. How he somehow managed to save himself from the Rule 5 draft with a 40-man roster spot.