The Kurious Kase of Jason Grilli

Only 21 pitchers since 1901 have struck out 13 or more hitters per game over a minimum of 50 innings in one season. Included among the group are noted strikeout artists like Pedro Martinez, Randy Johnson, Rob Dibble, Eric Gagne, Craig Kimbrel, Billy Wagner, and Jason Grilli. That’s right, Jason Grilli.

Share All sharing options for: The Kurious Kase of Jason Grilli

When reports surfaced on Thursday that Grilli was being courted by as many as 10 different teams, my first reaction was to dismiss the news. After all, the next destination of a journeyman reliever is hardly cause for curiosity, even if his agent is Gary Sheffield. However, the number of teams with interest was too compelling to ignore. And, sure enough, after a quick review of his statistics, it soon became apparent that the clamoring for Grilli was by no means much ado about nothing. The right hander may be a journeyman, but something seems to have happened to him along the way. He has become a strikeout machine.

In 2012, Grilli set down 90 batters in just over 58 innings for a K/9 of 13.8, the 15th highest rate among all pitchers with at least 50 innings. Being in such select company is impressive enough, but what makes the achievement truly remarkable is the meteoric rise Grilli needed in order to attain such a lofty strikeout level. 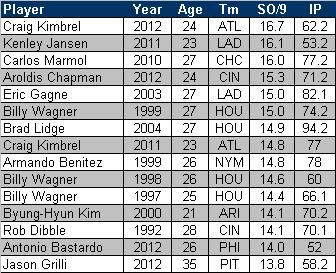 Early in his minor league career, Grilli was known as strikeout pitcher, averaging well over 10 per game during his first three seasons as a professional. However, injuries started to mount, culminating in Tommy John surgery early in the 2002 season. Upon his return to the big leagues in 2004, the 27-year old righty was a very different pitcher, relying more on finesse than power. That season, he struck out only five batters per game in eight failed attempts as a starter. In 2006, he was finally converted to a reliever by the Detroit Tigers, and, in over 60 innings, recorded a near career-low strikeout rate of only 4.5. 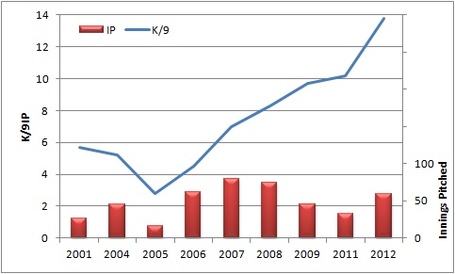 In the intervening years, Grilli's strike out totals ramped up, but did not surpass the double-digit mark until after another injury, this time to his quad, forced him to miss the 2010 season. Despite the setback, when the righty resumed his fragile career in Pittsburgh, everything fell into place. After striking out 10.2 batters per game in 2011, Grilli followed up with an astounding 13.8 last season, or more than three times as many as when he began his career as a reliever in 2006. 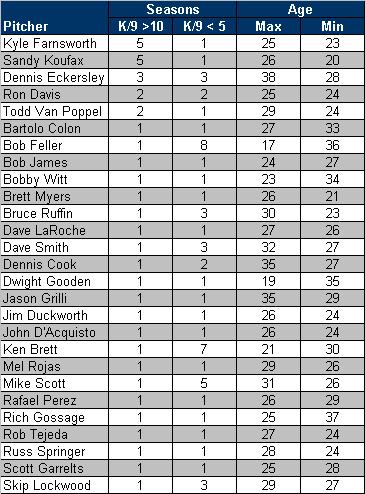 Grilli's transformation into a dominant reliever is unique in several respects. Not only is he one of only 27 pitchers to have at least one season (minimum 50 innings) with more than 10 K/9 and another with less than five K/9 (and one of six from the group to have his best strike out season after age 30), but no other hurler has ever taken Grilli's variance to the same extreme. The 9.31 difference between the right hander's highest and lowest K/9 rate in 50-inning seasons is the largest all-time. As a further distinction, Grilli is only the third pitcher over age 30 to strike out at least 13 batters per game (Wagner and Johnson are the others), and, at age-35, the most senior hurler to attain a ratio as high as the one he recorded in 2012. 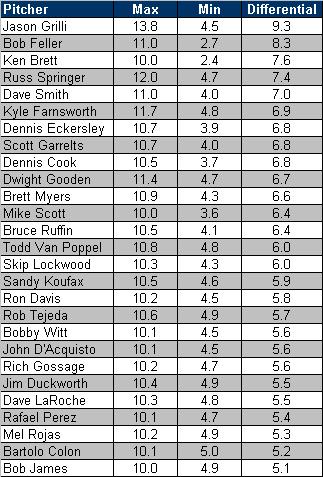 It should be noted that six other pitchers surpassed the 13 K/9 plateau in 2012, a year that saw a record-setting level of punch outs league wide. However, Grilli's impressive strike out total still qualifies as a historic achievement. So, if you had been ignoring Grilli's free agent decision, it's time to take notice. There's a good chance the next time you hear about him will be after he has struck out several batters on your favorite team.