Fear and Loathing in the Bronx as Yankees Try to Stay Above .500

Share All sharing options for: Fear and Loathing in the Bronx as Yankees Try to Stay Above .500

Las Vegas has installed Toronto as the early favorite to win the World Series, but in order for the Blue Jays to simply win the A.L. East, the team will need to undergo a historic improvement. Meanwhile, in the Bronx, there has been uncharacteristic pessimism. In fact, some have suggested that the Yankees could be battling to stay over .500, much less repeat as division champions. In order for that dire prediction to come true, the Bronx Bombers would have to suffer a 15-win drop off from last year’s total, resulting in a winning percentage decline of 0.093. Are the Yankees’ capable of such a slide? The following historical snapshot really can't answer that question, but it does present an interesting perspective from which to consider the possibility. 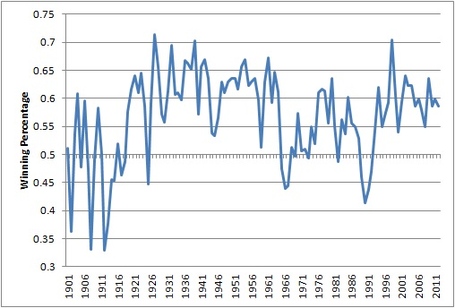 It’s too early to make meaningful projections for 2013, but chances are the Yankees will remain a top contender for the division crown. However, if the team does struggle to maintain a winning record, it won’t be the first time it experienced such a significant decline. In 10 others season, most recently in 1999 (albeit off 1998’s historic rate), the Yankees saw their winning percentage drop by at least 9.3 points, including four occasions after finishing in first the season before. 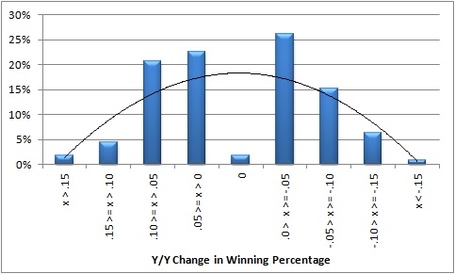 Although a significant decline by the Yankees would not be unprecedented, the franchise has done a relatively good job avoiding them. In addition, the Bronx Bombers boast a major league best 80% rate of seasons at breakeven or better. So, from a historical perspective, Yankee fans can take comfort in the franchises ability to avoid falling below .500. 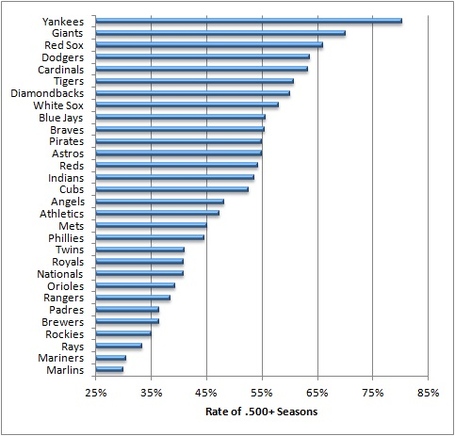 Past results are not a guarantor of future performance, so the Yankees could very well experience the free fall predicted by those unimpressed by the team’s off season maneuvering. However, like the Blue Jays’ pursuit of the division crown, if the Bronx Bombers find themselves below .500, it will be history in the making, just not the kind to which Yankee fans have grown accustomed.