If George Steinbrenner were alive today, no one would be talking about how much money the Los Angeles Dodgers are spending.

Share All sharing options for: Dodger Dough Doesn’t Stack Up to Yankee Dollar

A popular meme surrounding the Yankees revolves around comparing how the team is being operated now to the modus operandi that prevailed under the Boss. Usually, the comparison is intended to juxtapose the organization’s new cost conscious approach against the unfettered spending that occurred under Steinbrenner’s regime. So, with the Dodgers poised to out-Yankee the Yankees, and out-Steinbrenner his son, it’s only natural to think about how the Boss would have reacted to the all of the money being spent in .

By the time the Dodgers get around to putting their wallet away, the team could have a payroll that eclipses the highest total doled out by the Yankees in any one year. However, as Wendy Thurm illustrated in a recent post at Fangraphs, when you adjust for inflation and/or compare payroll to industry revenue, the 2013 Dodgers won’t be significantly more expensive than the Bronx Bombers of recent vintage, if at all. In fact, if baseball salary inflation was used as an escalator, instead of the consumer price index used in Thurm’s analysis (the price of pitching being a little more volatile than milk and eggs), this year’s Dodger payroll wouldn’t even come close to some of the price tags paid by the Yankees in the middle of the last decade. 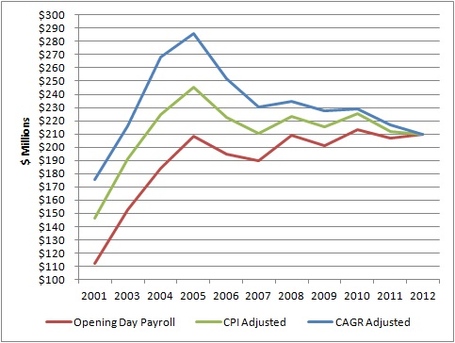 Note: CPI is an inflation adjustment; CAGR represents the compounded annual growth rate for salaries experienced in each time period. Each adjustment attempts to portray past expenditures in current terms.
Source: Cots Contracts and Forbes

In the chart above, the Yankees Opening Day payrolls, as calculated by Cot’s Contracts, are presented in real terms as well as adjusted for both the CPI and the compounded annual growth rate of salaries in each relevant period. Because the salary growth in baseball has generally outpaced the annual inflation rate, when expressed in 2012 terms, the Yankees’ payrolls from last decade look much higher. So, even if the Dodgers do crack the $250 million mark, as suggested by Thurm, their payroll will still pale in comparison on an apples-to-apples basis.

Adjusting for inflation can be somewhat esoteric, which is why comparing payroll to industry revenue seems more elegant. On this basis, the Yankees once again dominate the landscape, owning the 10 highest margins based on salary (Cots) and revenue data (Forbes) since 2001 (excluding 2002). Using the $7.5 billion revenue earned by MLB in 2012 as a guide, the Dodgers’ payroll would have to top $330 million in order to match the 4.4% of industry revenue represented by the Yankees’ peak payroll margin in 2005. In fact, even with minimal growth, a conservative assumption in light of the exponential revenue increases presaged by exploding TV contracts, the Dodgers’ 2013 payroll may not even top the franchise mark set in 2001, when its payroll was 3% of industry receipts. 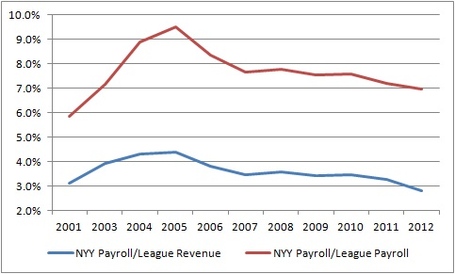 Source: Cots Contracts and Forbes; 2012 revenue based on reported figure of $7.5 billion

In terms of percentage of league-wide payroll, the Yankees also hold the top nine spots, with the 2004 Red Sox knocking the 2001 Bronx Bombers from tenth place. By this measure, 2005 once again turned out to be the most exorbitant Yankee payroll, maxing out at 9.5% of salaries paid to all major leaguers as of Opening Day of that year. In order for a team to approach that percentage this season, it would have to amass a payroll of at least $290 million, assuming normal salary growth.

Based on the analyses above, the Dodgers’ 2013 payroll isn’t likely to surpass the sums paid by the Bronx Bombers in at least a few seasons from the past decade. However, these adjustments "penalize" the Yankees for being financial trailblazers. For the last 20 years, the team has been ahead of the economic curve, leveraging its assets to generate increasing baseball revenue. So, by definition, its payroll should have been disproportionately higher than other teams. After all, the Yankees weren’t spending money it didn’t have, and Steinbrenner wasn’t dipping into his own pockets to subsidize the expense. Rather, the Yankees were spending money to make money, and enjoying the fruits of that labor on the field.

Yankees’ Payroll as a Percentage of Team Revenue 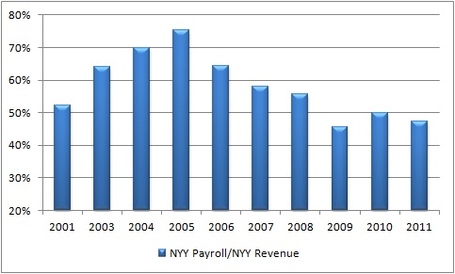 In 2005, the Yankees’ payroll peaked at 75% of revenues, but since then, the share of cash flow allotted to salaries has decreased precipitously and now stands under 50%. In 2011, the Bronx Bombers’ rate of 47.2% ranked 12 in all of baseball, just about in the middle of the Phillies’ two-thirds at the top and the Royals’ one-quarter contribution at the bottom. The Yankees haven’t ranked in the top-5 in this category since 2007, and only two of the team's payrolls since 2001 (excluding 2002) rank among the 10 highest in terms of percentage of revenue. 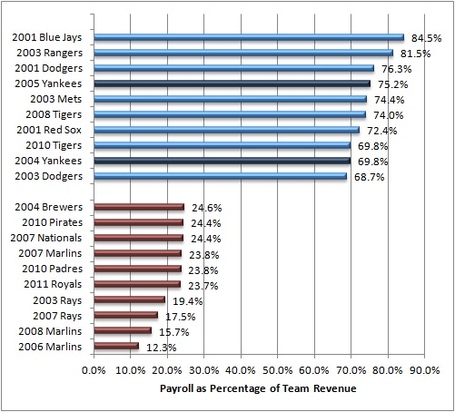 So, as it turns out, the 2013 Dodgers may be shooting for a payroll record set by the Blue Jays, not the Yankees. Then again, considering the exponential increase in revenue expect to earn by either striking a new TV deal or starting its own RSN, even this mark doesn’t seem likely to fall. Instead, will have to settle for having the highest payroll in nominal dollars, which, although a hollow victory in relative terms, would likely still have gotten the Boss’ juices flowing and, perhaps, his wallet opening as well.