A ninth inning rally wasn't enough to save the Yankees, who now trail 3-0 in the ALCS to the Tigers.

Well, here we are. Do you know how sportswriters overkill the expression "must-win game" so much that it diminishes the value of those games that truly fit that description? Well, tomorrow will actually be a real "must-win game" for the New York Yankees, who fell tonight 2-1 to Justin Verlander and the Detroit Tigers. They rallied for their first run in 17 innings during the ninth and put the tying run in scoring position for their newfound hero, Raul Ibanez. Unfortunately, not even Ibanez's 2012 playoff magic could save them tonight.

Joe Girardi made a few lineup changes, but not even fresh faces could help the Yankees through the first eight innings. Verlander was not at his best and actually only struck out three, but he still shut the Yankees out on just two hits through eight innings. Both of those hits came off the bat of Ichiro Suzuki, who was promptly stranded after singles in both the fourth and seventh. The Yankees were badly struggling to do much of anything other than pop up many of Verlander's pitches, but they certainly received no help from home plate umpire Sam Holbrook, who called an absolutely atrocious game. 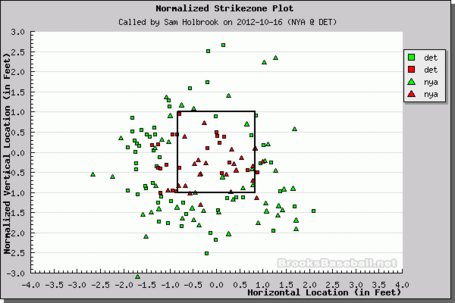 Woof. Somewhere up in the sky, even the late Eric Gregg is groaning at some of those calls. Verlander's very first pitch was a ball out of the zone called for a strike. The pitch foreshadowed what was to come. In the sixth, Curtis Granderson took Verlander 3-0 to lead off the frame, but ball four was called a strike and he eventually popped up. Watching the game with TBS's strike zone in the picture, Verlander also threw three straight balls to Raul Ibanez with Ichiro on first and two outs in the seventh, but Holbrook called two of them strikes. 1-2 is very different from 3-0, and Ibanez grounded out to end the inning.

As inconsistent as the strike zone was, the Yankees should still have shown more life against an off-his-game Verlander. Instead, fans saw more of the same from the Yankees offense as has been on display for most of the postseason. Fast innings, soft grounders, 1-2-3s, and even a bad break. Brett Gardner scalded a Verlander pitch in the sixth, but it went right back to him on a line. Verlander dropped it, then fired to first for the out.

On the other side of the coin, the Yankees' bullpen did an admirable job picking up Phil Hughes, who left the game early in the fourth inning with a stiff back. Hughes worked in and out of trouble in the first and the third, playing with fire and putting runners on for Miguel Cabrera and Prince Fielder, but he escaped both jams. He escaped the first crisis (first and second, two outs) by getting Delmon Young to fly out to center. In the fourth though, Young got his revenge with a line-drive homer on a hanging slider over the left field fence to give the Tigers a 1-0 lead. If the Yankees don't rally tomorrow, then Young will probably be getting some pretty hardware as ALCS MVP. The Yanks just cannot figure him out for whatever reason. Although Young is only hitting .308, he had three hits, including the go-ahead double, in the Tigers' Game 1 victory, and his go-ahead homer tonight was his second of the series. The Tigers would not relinquish their lead. Please, Yankees, save us the pain of having to see a guy whose career fWAR is 0.8 in 880 games be crowned the ALCS MVP.

After the homer, Hughes walked Andy Dirks on five pitches, looking visibly uncomfortable on the mound in the process. Girardi and trainer Steve Donohue came to the mound, and Hughes left with back stiffness. Rookie David Phelps entered the game and worked around a hit to throw a scoreless inning. Quintin Berry led off the fifth with a grounder toward Eric Chavez at third that had weird topspin. He could not grasp it, and Berry reached. He stole second, and the dangerous Miggy crushed a double off the right-center field fence to give Detroit a two-run lead. Phelps departed, and the OOGY team of Clay Rapada and Cody Eppley got out of the inning. The Yanks ran into trouble again in the sixth when Eppley and Boone Logan loaded the bases for Miggy. The matchup of arguably the best righthanded hitter on the planet against the lefty Logan spelled disaster, but the Yankees were bailed out. Chavez atoned for his error by making a nice scoop on another weird grounder, and the Yankees turned a 5-4-3 double play. If you want to blame Chavez's error for the Tigers' second run, fine. However, his fine play in this situation saved at least another run.

Alas, the double play could not spark a rally, and the Yankees stayed quiet until the ninth. Logan was terrific in stemming the Tiger tide by throwing 2.1 scoreless innings against a dangerous lineup. It would have been "2003 ALCS Game 7 Mike Mussina:-esque if the Yankees had won (Incidentally, the 16th was the ninth anniversary of that game. Apologies on the lack of a "This Day in Yankees History" post, but covering this game was more urgent.)

In the ninth inning, the Yankees appeared to run into some bad luck again when Eduardo Nunez sliced a ball deep down the left field line that landed foul by barely a foot. Nunez was controversially inserted into the lineup at shortstop in place of the more-surehanded Jayson Nix, but he made Girardi's decision to play him look great with a nice diving stop to save a run earlier in the game, then sent a hanging curve from Verlander into the Detroit night. His solo blast over the left field wall finally broke the Yankees' shutout streak. Gardner took Verlander over the 130-pitch mark with an eight-pitch at bat before grounding out to end Verlander's night. Lefty Phil Coke came into the game since three of the next four potential hitters were also southpaws. He got Ichiro to ground out to put the Yankees down to their final out. Switch-hitter Mark Teixeira kept the game alive with a two-strike single up the middle, and Robinson Cano, also with two strikes, ended his horrifying 0-for-29 drought with a clean single to the left side.

Nix was in to pinch-run for Tex at second, and a little single from Ibanez, the 2012 playoff hero, would likely have knotted this game up. It appeared that despite the lefty/lefty disadvantage, Ibanez might just do it as he got ahead on the count 3-1. It was not to be though, and after two fouls, he swung through a slider from Coke and it was all over.

The Yankees will turn to CC Sabathia to save their season for the second straight start tomorrow night in Game 4. It's a long road before they can even think about getting back in the series, but you can't win four games in one.

Focus on tomorrow. Perhaps don't wait until the ninth inning to start putting good at bats together against Tiger pitching (it will be Max Scherzer, who pitched to a 1.23 ERA in 7.1 innings during the Division Series last year). Scratch some runs out for the ace, and to quote Terry Francona "win every inning." Winning those innings can lead to something greater if you can do it. The 2012 Yankees did not win 95 games by luck. They have the ability to do it. They have their ace going tomorrow.