Share All sharing options for: Is Pitching Actually More Important Than Hitting?

On Monday night, Duggan posted an excellent article looking at the Montero-Pineda trade from the perspective of the Yankees offensive in 2013 or 2014, and came to the conclusion that while Pineda obviously helps the team, trading Montero potentially hurts the offense more a few years down the road, so this trade basically equates to robbing Peter to pay Paul, with the plan of robbing Paul later to pay back Peter, while really trying to avoid paying either one.

I do agree with him, at least partially: cliches (i.e. pitching wins championships) are useless, and any wise GM should be focused on the strength and depth of the entire roster, not just zeroing in the rotation or the batting lineup. However, after giving it some thought, I've come to a slightly different conclusion. I'm convinced that starting pitching does matter just a little more than hitting does, not only in the abstract but especially for this Yankees roster as the next few years unfold, and therefore losing Montero probably doesn't hurt as much as we might think it does.

For starters, there is what I'll call the opportunity principle. Over 162 games, a team has a certain number of plate appearances and innings that someone will need to fill - 6,306 PAs and 1,458.1 innings for the Yankees in 2011, to be exact. A starter who can pitch 200 innings will cover about 14% of the team's total, while a hitter who comes to the plate 700 times only covers 11%. Thus, starting pitchers carry a heavier burden, and replacing a mediocre starter with a good one should have a greater impact than replacing a mediocre hitter with a good one, because 14% is greater than 11%. Obviously, this is all very abstract and theoretical, but keep following me.

You're aware of the Pythagorean theorem in baseball, which indicates an extremely strong correlation between a team's run differential and it's won/loss record, but what you may not realize is that equal run differentials aren't actually equal. Let me explain. The 2011 Yankees scored 867 runs while allowing 657, a +210 differential which calculates to an expected won/loss record of about 103-59. I ran regression scenarios based on these figures, one where runs scored stay constant and runs allowed increase, the other where runs allowed stay constant and runs scored decrease, but both were balanced so that the run differentials were always equal. Take a look: 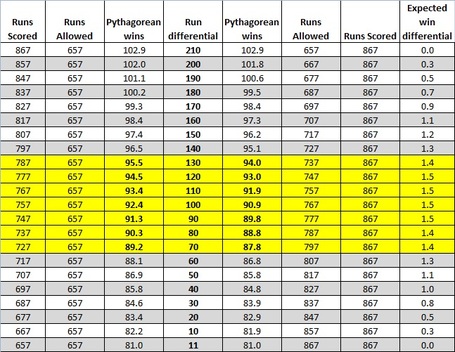 Notice that even with equal run differentials, the team that manages to allow fewer runs always has a better expected record than the team that scores more. In fact, within the highlighted area, this difference is as much as 1.5 wins.

Why? Well, generally speaking, it's harder for a team to score six runs in a game than it is to score five, harder to score five than four, and so on. Winning a game only requires a team to outscore its opponent by a single run, and that run is easier to come by when the pitching staff lowers the demand on the offense. This explains why a team like the 2011 Phillies won so many games with only an average offense; their pitchers allowed 3.26 runs per game, meaning that four runs was usually enough to win. This is not especially difficult for a lineup of decent major league hitters.

What is my point? The Yankees have an aging offensive core that's locked in well past the middle of this decade. How far Alex Rodriguez, Derek Jeter, and Mark Teixeira fall remains to be seen, but the days of routinely scoring 850+ runs are probably over no matter what Brian Cashman did this offseason. Even if Jesus Montero were to reach his potential quickly (and assuming he actually was able to get at-bats somewhere, but I digress...), there's no way that one hitter can make up for three who are declining. If they wind up aging gracefully, Montero may have been able to soften the blow, but if some or all of them declined rapidly, it would be like trying to keep the Titanic afloat.

This means that within a season or two, the Yankees will probably be more like a +150 or +125 run differential team, thanks to this unavoidable regression of offense, but we know it's better to achieve this differential while giving up 650 runs, not 700 or more. Since they have more flexibility with the pitching staff anyway, (i.e fewer long term contracts), and since starting pitchers bring a little more bang for the buck (14% instead of 11%), it's imperative that they refocus their long-term efforts towards strengthening the rotation, and the acquisition of Michael Pineda fits that model perfectly.

Remember the 2011 Phillies, because the Yankees offense will probably resemble theirs soon enough. Without a fantastic pitching staff to keep the offense in the game, they may find itself staying home in October much more often than they've grown accustomed to.