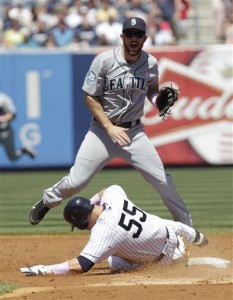 Another One Bites the Dust: Russell Martin goes down on the front end of a Derek Jeter double play grounder, something that's been happening with increased frequency of late. (AP)

The Yankees have hit a rough patch, losing four out of five games for the second time this month. The common theme in both stretches has been a lack of offense. From May 1-5, they scored a combined total of 10 runs against the Orioles and Royals — what is this, 1980? — managing more than one run just once in that span. Over the past five games against Seattle, Baltimore and Toronto — a stretch which followed a 5-1 run, so don't throw yourself out of the window just yet — they scored 14 runs and managed more than two just once.

One thing that stands out in looking at the Yankees' batting line is that they've already grounded into 18 double plays this month, equaling the 18 they grounded into last month. They've gone from one twin killing every 48.4 plate appearances to one every 32.6, roughly a 48 percent increase in frequency. While they're fifth in the league in GIDP, compared to second last year, in May they have far exceeded their 2011 rate of one double play for every 43.1 PA. A look at their monthly batted ball splits at FanGraphs shows that they're hitting groundballs at almost exactly the same rate across the two months (45.9 percent and 45.8 percent of all balls in play, respectively), so the issue has more to do with bad timing than anything else. Of course, it's worth pointing out that double plays can only happen if you're putting runners on first base. The Yankees have grounded into double plays 3.2 percent of the time when when they had a runner on first and less than two outs (a double play opportunity), a rate that ranks fifth in the majors. They ranked fifth last year as well, but at 2.7 percent.

Leading the way in May double plays has been — surprise! — Derek Jeter, with four this month, compared to just one in April. Those four came in back-to-back games on May 13 and 14, the former being Andy Pettitte's return on Sunday (a 6-2 loss to the Mariners), the latter an 8-5 win over the Orioles. Jeter's season total of five is tied with the slumping Mark Teixeira for second on the team, behind Robinson Cano's six, so it's not like they've been confined to the underperformers. Jeter's spate of GIDPs plays into a lengthy bit that I prepared yesterday for a magazine writer who asked me about his performance thus far this season with regards to his new swing, updating something I wrote a month ago. What follows is a version of what I gave him, which doesn't include the stats from Thursday's loss...

Exactly why the hits are falling in is a thornier issue. Jeter's line drive rate — the hardest-hit balls — has jumped, from 11.5 percent before the injury to 19.6 percent since*, but line drive rate is notoriously susceptible to various biases; base hits are more likely to be scored as line drives than they are fly balls or grounders, and believe it or not, the height of the press box from which the stringer observes the batted ball makes a difference (see here). In other words, it's easy to go overboard attaching too much significance to that.

All of which is a roundabout way of saying that fundamentally, things haven't changed a whole lot for Jeter other than a) the hits are falling in, and b) more of his fly balls are going out. His changed swing is probably part of both trends, but it certainly doesn't explain everything — there's a bit of randomness or luck involved, and we would expect that to normalize over time.

A few of other notes:

• I was at the Stadium on Sunday, covering Pettitte's return to action for Baseball Prospectus. Facing a particularly weak-hitting Seattle lineup, the soon-to-be 40-year-old southpaw's showing was uneven, marred by two mistakes that ended up going for two-run homers, but there were certainly positives to be taken from his afternoon. He pitched into the seventh, his velocity touched 90, and by his own admission, had just about everything working except for his cutter, which drew one swing-and-miss out of 20:

"I was throwing my cutter down and in, and I couldn't get anybody to swing over it as far as the righties," said Pettitte. "But that's why you still have a curveball, you still have a changeup you can go to, and actually Russell [Martin] wanted to go to them a few times and I shook off. Don't know why, but I wish I would have pitched differently in that one inning. The [Smoak] home run was a cutter, and just a bad mindset… I tried to throw one in the zone there, and that's a bad idea, especially to Smoak right there, because that's kind of his nitro zone. Just a horrible pitch."

The rest of my writeup is here.

• I was saddened to hear the news that Kerry Wood has announced his retirement. Wood spent only three months with the Yankees (including the postseason) in 2010, and while he was a long ways removed from the phenom who struck out 20 in his fifth major league start — check out the video of his finishing pitches in each one — he still flashed some of his old brilliance. He walked 18 (6.2 per nine) during his 26-inning regular season stretch in pinstripes while striking out 31 (10.7), but allowed just two runs, and let only one inherited runner out of 10 score. Like David Robertson, he seemed able to pull off his Houdini act at will by getting the big K. Of the 11 hitters he faced with a man on third base, he struck out five while allowing just one hit, and of the 32 he faced with runners in scoring position, he struck out 12 while allowing two hits.

When Cliff Corcoran and I joined forces with Steve in the summer of 2010 — the Pinstriped Bible Study Group, as they called us — it was right after Wood had been acquired. I recall talking him up in our brief video introduction, while the other fellas were less impressed, and I wrote about his career at length in September after he had proven his worth. He was a pleasure to cover during his short time in New York, and while it's fair to wonder what might have been had he not endured so many arm miseries, he got more far mileage out of that arm after those early injuries than many pitchers do, and he deserves a great deal of credit for continuing to battle.

Update: On Friday afternoon against the White Sox at Wrigley Field, Wood came in to face one final hitter, and struck him out before heading into the sunset. This is must-watch stuff, one of the more touching moments you will see on a ball field this year or any.

• The two weeks since I last weighed in here have been eventful ones. Shortly after publishing my piece on Mariano Rivera — and getting even more emotional about the death of the Beastie Boys' Adam Yauch moments later — I accepted an offer to start a new blog at SI.com, one that will launch on May 28 under the name "Hit and Run." I announced the new venture at Baseball Prospectus on Monday; I'll be scaling back my involvement there, but not leaving entirely, and I'll continue to weigh in once a week here.

On Thursday night, I went out for dinner in Manhattan with Steve, Cliff (whom I'm thrilled to rejoin at SI), and longtime pal Alex Belth of Bronx Banter. The four of us have known each other for about 10 years, and while we've been able to muster a quorum of three on several occasions for various Pinstriped and Banter-related functions, it's been at least five since we all found ourselves together in the same room; we're a busy, far-flung lot, strewn from New Jersey to the Bronx to Brooklyn. Joined by another orbiter of the Yankee universe, Emma Span, we commemorated the occasion with a photo: 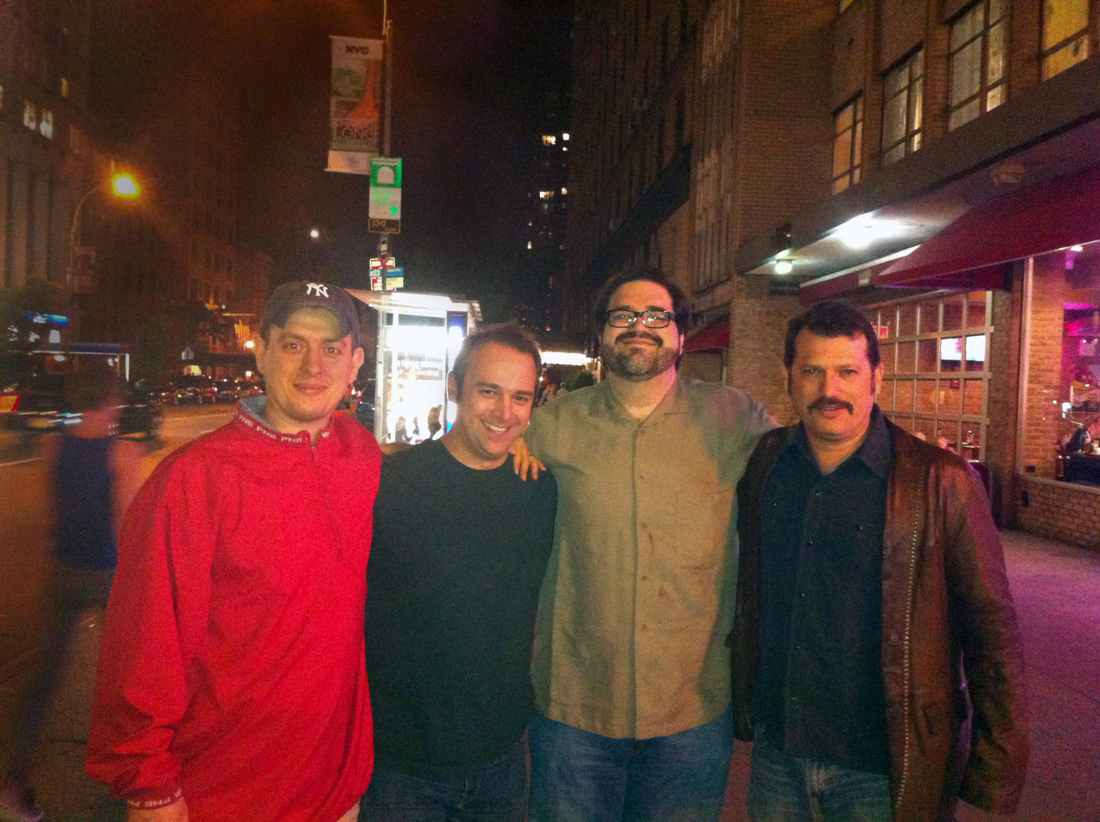