Andy Pettitte: What If He Can’t Come Back?

Share All sharing options for: Andy Pettitte: What If He Can’t Come Back? 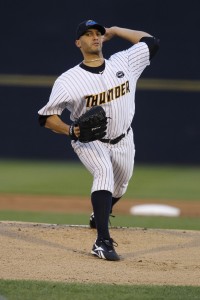 Andy Pettitte: Working his way back to you, babe. (AP)

It seems like the wait has been both too long and not long enough, but it’s there in black and white on the schedule: Andy Pettitte will be back on Sunday. It’s Hiroki Kuroda tonight, Phil Hughes on Saturday, and then the Louisiana Lazarus on the day of rest. Pettitte will be pitching against the Mariners, one of the worst offenses in the league, so he has that going for him, but regardless of the opponent, will he still be able to pitch after a year away?

There has been a lot of good in Andy Pettitte’s four starts for Tampa, Trenton, and Scranton. He’s pitched 17 innings, allowed no home runs, and walked just three while striking out 13. Perhaps his velocity hasn’t been all that impressive, but two words: Jamie Moyer. The ageless lefty—why is it we say "ageless" when we really mean "old?"—has pitched effectively for the Colorado Rockies despite a fastball that covets 80 miles an hour, never mind 90.

Pettitte’s left-handedness and groundball tendencies are an argument in his favor. Think of pitchers like Moyer, Kenny Rogers, and Tommy John. They had extended career codas despite declining velocity because of their ability to pitch to spots and keep the ball in the park. Two of Rogers’ best seasons came at the ages of 40 and 41. Pettitte’s approach isn’t identical to that trio—he’s been an unusual specimen in many ways, with all of his performance markers bouncing around throughout his career, likely because he often pitched at less than 100 percent. Some years he’s been a high-strikeout pitcher, some years not; his command and has been excellent, but there are seasons with a few more walks than others; some years he posts a top-ten ERA, but mostly he hasn’t, and so on.

Pettitte’s comeback once seemed like a bit of a distraction this season given the team’s pitching depth, but that assumed advantage has evaporated and the club could really use his help. The average American League starter has an ERA of 4.28. Yankees starters are at 5.02, 11th in the league. The next-worst team, the A’s, are almost a full run lower at 4.18. Remove Freddy Garcia from the equation, as the Yankees have wisely done, and that number drops to 4.39, better, but still 11th in the rankings.

At 17-14, the Yankees are on pace for 89 wins, not enough to win even an AL East that appears to have been substantially degraded. With Kuroda looking more vulnerable in the DH league, Ivan Nova pitching erratically (albeit with a massive upgrade in strikeouts), and Phil Hughes being, well, Hughes, the club can use at least one more reliable cog in the rotation, and that’s without making reference to the solid but thus far inefficient David Phelps.

The jury is still out on that rookie. Dellin Betances and Manny Banuelos are just beginning to get their seasons in gear. Adam Warren has not been good. Still, these are options. The question is, if Pettitte looks old, if he looks finished, if he physically cannot do the job no matter how much he and the Yankees want him to do it, how much rope do you give a beloved elder statesman? How long until you admit that it’s not working?

It’s not so much that the Yankees don’t have other choices, but that they’re going to be reluctant to embrace them if it means the disappointment of admitting that the great lefty is through. I’m not saying that this is what will happen—I hope Pettitte has an encore in him—but only that the speed with which the Yankees adjust to changing circumstances if in fact things do not go as planned will go a long way towards determining their final place in the division standings. As the old saying goes, he who hesitates is lost… And he who hesitates because of sentimentality as he who hesitated for other reasons.

Pettitte could save the season, but he could also help kill it.