David Robertson: Can the Yankees Survive Him? Of Course They Can

Share All sharing options for: David Robertson: Can the Yankees Survive Him? Of Course They Can 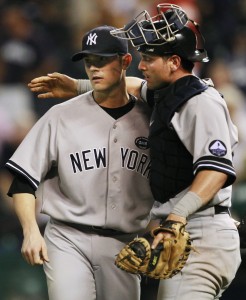 David Robertson: We will all get through this together. (AP)

I’ve spent the roughly 12 hours since David Robertson blew his first save following the storm of arguments in articles and tweets regarding his suitability to close, the real impact of the loss of Mariano Rivera, whether any pitcher can close or just some pitchers, and on and on and on. As long as we don’t overreact to one game, he said tongue firmly in cheek, we should be able to come to a dispassionate, reasoned answer on the subject.

Robertson has blown one save, and some have already decided that it’s because the ninth inning is so different from what he’s done before. It’s not, really, you can see that from the outside, but sometimes psychological factors create pressure that we think should be there and fulfill a prophecy that was based on reasoning that withers in the face of real logic. That makes the pressure unnecessary, but no less real.

Meanwhile, the guys who supposedly could close because they had established that they were equal to that ninth inning pressure have been dropping like they all picked up the same norovirus after sharing a dish of tainted oysters. Kevin Gregg, Francisco Cordero, Heath Bell, Javy Guerra, Jordan Walden, Frank Francisco, Carlos Marmol, John Axford, Matt Capps, Jose Valverde, and J.J. Putz have either struggled or been demoted. Simultaneously, Fernando Rodney, Brett Myers, Grant Balfour, and Jonathan Broxton number among the league leaders in saves. The Orioles’ Jim Johnson is 8-0 in save opportunities.

Sometimes, in fact quite often, the guy you think can close, who even has the track-record that seems to prove he can do it, can’t. Conversely, a pitcher who you never would have thought could succeed in the role often does. Dennis Eckerlsey was a sore-armed career starter in his thirties. Doug Jones threw changeups off of changeups off of changeups. Dan Quisenberry threw low sidearm. John Franco threw the screwball. Hoyt Wilhelm was a knuckleball pitcher. It is impossible to imagine any of today’s teams allowing a knuckleball pitcher to close. Heck, R.A. Dickey aside, it’s impossible to imagine any team allowing a knuckleball pitcher, period.

There is no definitive model of a closer, no birthmark that certifies a pitcher as able to pitch the eighth but not the ninth. Closers are made, not born. Yes, some pitchers aren’t suited for the job; not everyone is suited to do your job either, or mine. People who are squeamish about blood and viscera make lousy surgeons, and so on. Yet, there are a lot of surgeons out there, and there are, and have been, many closers. There have been 135 40-save seasons by 69 different pitchers, among them Billy Koch, Bobby Jenks, Danys Baez, Joe Borowski, and Jose Jimenez. All of them were proven closers, and then they weren’t.

It reasons that if you can be a defrocked closer, you can also be a pre-frocked closer. That’s David Robertson right now. He needs the benefit of the doubt for awhile, or we may never find out what he can do. Look, he was going to have days like this. As I wrote in this year’s Baseball Prospectus annual, "He held batters to just .053/.053/.105/ in 19 plate appearances with the bases loaded, and in 120 plate appearances in situations defined as high leverage, Robertson struck out 50 and allowed just 10 hits—all but four of them singles. No one can be that good, or that lucky, indefinitely."

In that sense, fate chose a bad time for Rivera to yield to Robertson, right at the moment that the latter’s luck was due to change. But what will it change to? Put aside 2011 and Robertson had a 134-game record of pitching to a 3.99 ERA in the big leagues, 3.60 in the two seasons following his rookie year. He walked nearly five per nine innings, struck out nearly 12, and gave up a home run every now and again. You can be a closer pitching that way, not a great one perhaps, but acceptable. Think of the aforementioned Marmol, who has saved 97 games in his career with an even more extreme version of Robertson’s act. It’s not ideal, but it can work, at least for awhile.

And no, it’s not Mariano, but it was never going to be, regardless of if you deploy Robertson in the ninth or any other human being on the planet. That’s not a reason to panic—a great many teams have won World Series with closers other than Rivera. If Robertson does anything other than what he did last night—that is, avoid a total, career-altering meltdown—he and the Yankees will be fine.